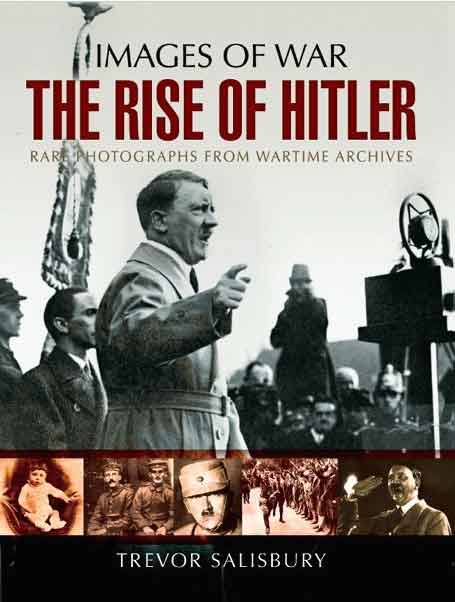 Any book about Adolf Hitler is going to meet with some controversy. It’s not going to go ‘unmolested’ as it were.  I’ve written articles and book reviews about the SS before and met with a barrage of abuse over them, so how do I feel about writing a book review about Adolf Hitler’s life in photographs?

Well, to be honest; it’s history. It happened, he’s dead, as far as I know I’m not related to him and none of my family fought for Germany or Nazi ideals during WW2, in fact the opposite so…..I sleep without guilt at night.

However, what fascinates me, what truly fascinates me is the outbursts we get every time someone mentions Hitler. The passion that goes into such predictable rants never ceases to amaze me for one very simple reason. Hitler is very much alive in book form as the dozens if not hundreds of books on the most written about man in history shows.

Every year new titles are released because people are fascinated by the man. They are intrigued and they are willing to pay good money on books and DVDs in order to learn about the most loved/hated man of the 20th Century.

So that over with and the standard few already furiously typing away no doubt; what of the book?  Is there anything to be learnt from yet another book on the subject? The short answer is yes.

I was a little cautious at first: Adolf Hitler in pictures. It almost sounded like history being sanitised to me; a childish version of the history of the leader of the Nazi Party. I was proved wrong, again!

From the earliest known photograph of Adolf to the very last, they are all here . What is more there are several surprises along the way. There are photographs of his First World War dog tags for instance; an astonishing ‘find’ in itself. We see pictures of Adolf Hitler in the Landsberg prison cell where he infamously wrote ‘Mein Kampf’ and even photographs of the man picnicking or immersed in a daily newspaper. Things we expect to see from ‘normal’ men but to see someone with Hitler’s reputation doing day-to-day chores or pastimes is, well, strange to say the least.

The book itself, translated by Trevor Salisbury, is in fact based on a Nazi propaganda book entitled ‘Deutschland Erwache’ or Germany Awake. It was propaganda of the purest form so much so even the Nazis never attempted to call it anything but. The original German captions are still present with their English translations underneath so it makes for clear reading and understanding.

The choice of photographs are, on the whole, from the original book but others have been inserted where appropriate to build up a clearer picture of the man, his views and his personality. Some would argue that the photographs are hand picked to represent a decent man, a man of the people or a man with high morals and beliefs. Well that is indeed the case. It is based on eighty-year-old propaganda! No photographs here of the horrors of war and nothing of the slaughter on the Eastern Front or from the death camps. This is a photo album, if you like, of a man simply going through his remarkable daily business, albeit in black and white. There are no excuses in the book, nodramatised apologies, just original photographs with a few descriptive lines of texts.

The original photographer, one Baldur von Shirach, was himself a fascinating character to say the least. He was the son-in-law of Heinrich Hoffman and a die hard Nazi to boot. The fact his mother was an American seemed to slow his promotion not one bit and he rose to the heady heights of State Secretary in 1936. He won an Iron Cross second class in 1939 and was on course for further promotion until in 1943 he spoke out publicly against Hitler’s treatment of the East European people. Clearly this was not a wise career path to take. He survived the war however, and Hitler; and stood trial at Nuremberg in 1945 where he was sentenced to twenty years imprisonment for his part in the Nazi regime. He died in 1974.

Luckily for history his photographs survived.