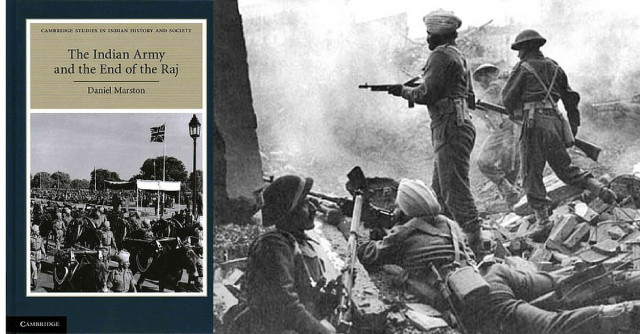 Intratheatre civil conflict, with its roots in religion, tribalism or ethnic differences, represents some of the most brutal and savage of conflicts. When initiated by political forces seeking advantage over rivals it quickly gets out of  control and reveals the most base of human behaviours. The period covered by Marston in his analysis of the Indian Army (IA), 1945-1947, represents a perfect storm of challenges for the Indian Army, there was such pressure on that force that it should have collapsed; that it didn’t is testament to the esprit-des-corps and leadership of the force. Marston’s book looks at the pressures exerted upon the IA and how it was able to continue to effectively carry out its duties despite the challenges that it faced.

Commencing with a look at the operations of the IA during the Second World War, the effects of the dramatic expansion from a few hundred thousand to over 2.5 million soldiers by war’s end,  the defeats in Burma, the enhanced professionalism of the IA in the latter years of the War, the effect of the Indian National Army and the role that the Muslim Brotherhood and National Congress had on the morale and effectiveness of the IA, Marston paints a picture of an army that was highly professional and tempered in the crucible of conflict. He also presents a comprehensive picture of the domestic environment within the Raj’s India as internal communal pressures intensified.

1946 witnessed the beginnings of the period of the trials for the IA as storm clouds gathered over the subcontinent and the Government of the Raj struggled with a British foreign policy that appeared to be at odds with itself (use of the IA for re-imposition of Colonial rule on behalf of European allies while concurrently initiating and accelerating the process of withdrawal from India). Additionally, the IA was subject to domestic pressure as it rapidly demobilized to a peacetime strength of approximately 450,000, undertook rapid Indianization as British Officers retired or were demobilized, while it maintained its role as the “Sword of the Raj” the impartial maintainer of domestic harmony in the face of a rapidly deteriorating internal security situation and dealt with an unclear future for its members as Britain, as the Indian domestic leadership’s struggled to find a way ahead.

Marston’s analysis continued into 1947, and outlines the timeline for partition and the establishment of two distinct countries was announced. The IA was further stressed by ongoing political machinations by the rival parties, ongoing Indianization, far faster than the British commanders in the Raj’s army recommended, the enhanced capability of the insurgents through the involvement of demobilized Indian soldiers in communal violence, the effective collapse of the police and the Civil Service and the short frame for dividing the army into two distinct entities. Yet, despite all of this, it continued to effectively undertake its tasks assigned by the Raj with a minimum of internal dissent. Marston’s approach of drawing upon multiple primary and secondary sources paints a very comprehensive and balanced picture for the reader that further reinforces the stunning accomplishments of the IA given its environment.

A key strength of this work is the authors in depth analysis of why the IA was able to maintain cohesion when faced with literally years of combat and a domestic situation that easily would have broken most militaries. He focuses his assessment primarily on the following areas:

Marston’s work is eminently readable and presents a very clear analysis of what strengths the Army of the Raj was able to draw upon to overcome civil and political disorder. His use of a myriad of primary sources further reinforces his thesis and position. His is not a study of the individual soldier but their reminisces and that of their peers and commanders are the basis upon which the work is built. Any Army, be it Yugoslavian, Soviet, Canadian, Iraqi or Mexican may be faced at some point with having to engage in internal stabilization operations. There are many lessons to be gleaned from the experiences of the Army of the Raj in the closing days of the British mandate. Marston’s book is an outstanding work and deserves the closest of review. 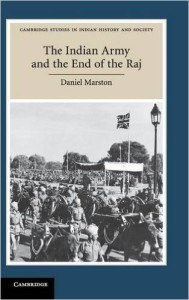 Maj Chris Buckham is an active duty officer in the RCAF. He maintains a review of his reviews at www.themilitaryreviewer.blogspot.com