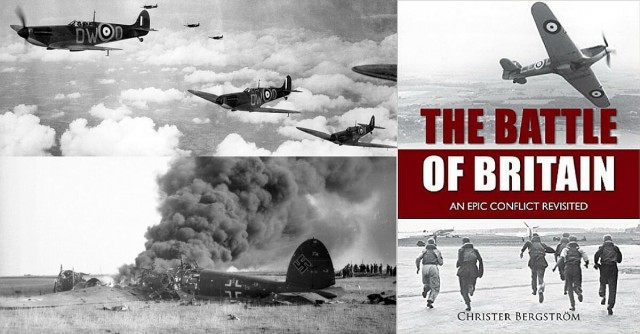 A recent book I reviewed was about the Battle of Britain and here we are again with yet another. It really is a case of ‘we shall fight them in the bookshops’ during this seventy-fifth anniversary year of the series of events that made up the epic battle. I have others to look at.

Here we have a really rather neat and considered piece of work by Christer Bergstrom, an author who has spent many years researching facts and collating conversations with some of the men who took part, including many top names.

The book takes us through the battle in some details along with a reassessment of significant features and statistics. We are treated to comparisons of the major aircraft and look at some important characters in addition to a diary of events with descriptions of major incidents from specific days.

This is a wide-ranging book looking at all aspects of the battle and brings it together in a single attractive package. The book promises rarely seen images and while there are many old favourites I noted a good number I had not seen previously. It looks good and feels substantial. Right from the off when we see Stanley Devon’s classic image of three Hurricanes converging on a Fairey Battle it is easy to presume we will be in safe hands and this seems to be the case.

There really isn’t much I can add to the Battle of Britain story. I grew up with it from a young age and pictured many of the RAF heroes of the battle as little more than gods. I loved the planes and the drama and followed it via films, war comics, Dinky toys and model kits. It was at a time when footballers were becoming a little more celebrated and the only big stars were musicians or in the movies. Our Battle of Britain heroes were not famous in the context of people who bake cakes on the telly but they were marked as heroic and that is a different kind of fame altogether. We rarely see people like it nowadays because our celebrity culture is so ingrained in ‘journeys’ and all those other dodgy descriptions for just getting on with things.

I have never met any participants from the battle but have been a semi-assiduous gatherer of books about it since I read Peter Townsend’s Duel of Eagles as a teenaged kid marooned in a village near Clonmel a million summers ago. Visits to the RAF Museum at Hendon were always a joy and any time I hear a Merlin engine I still sprint out into my back garden to see what has taken off from my local airport. Only the other day a couple of lovely Spitfires thundered over

The author of this book will probably identify with much I have said about my feelings for the battle. He retains a carefully neutral view of events and I guess this reflects the wave of respect there is for pilots on both sides nowadays. Although the battle remains the source of immense pride here in sunny Britain

our connection with it, like so much else, is fading. Facts emphasise that for all it meant to my country it was a genuinely international event with participants coming from far and wide. While I am not trying to make it sound like a sports event, it illustrates what a polyglot of nationalities the RAF was becoming as early as the summer of 1940.  Mr Bergstrom offers respect to all of them.

I like this book. It has a cool design and goes together well. The translation from the original Swedish by Donald Bryant and Louise Stromback flows along nicely.

The use of illustrations is handled with care and not a little style. It doesn’t feel like an English book and clearly it isn’t.  I guess the big question is how well it will fair in the blizzard of other B of B titles that are out there. There are three more on my ‘to do’ pile. The Battle of Britain will never go away, a fact I imagine pleases a lot of people all over the planet. Mr Bergstrom gives a good account of it and if you are looking for an image heavy one-stop history this might be all you need. 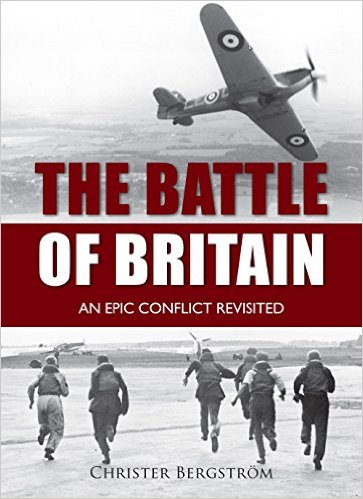