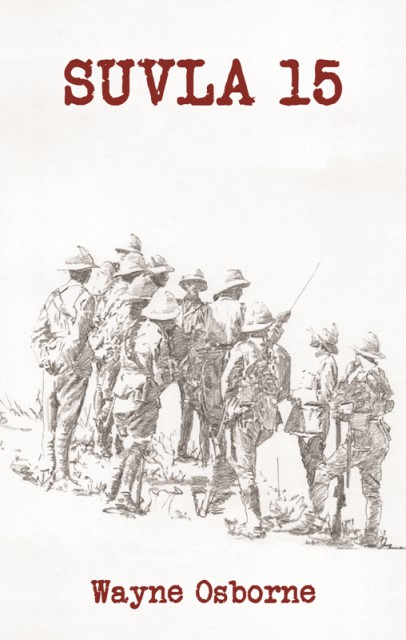 What a pleasure it is for me to see this book from our very own Wayne Osborne. It is quite appropriate that the last time I got sand between my toes was in his company on the beach at Suvla as we inspected the wreck of a Beetle landing craft. Later on we listened to one of Peter Hart’s recordings of a veteran singing a song of homeland while we stood in the sad cemetery at Hill 10.  It was the only time in a week of tragic stories that the thing really got to me and I keep the moment with me even now.

There is something about Gallipoli that sets it apart from all the other battlefields I have visited and although there are places on the Western Front I feel diminished for not having walked through for too many years, now, that week in the Dardanelles was off the scale. I can see why Wayne the historian was drawn to it for his stories, because all of us who were there as pilgrims loved the place.

Wayne’s knowledge and passion for the tragedy of Suvla is exhibited in this genuinely pleasing but nonetheless frustrating story of woeful leadership on the part of incompetent generals leading to the loss of many fine men.

Wayne concentrates on the Yeomanry cavalry who gave up their horses to fight in the scrub of Suvla as they pushed towards unassailable hills in line with a wholly deficient plan. If anyone wants to learn how not to fight a war they need only look at the performance of Ian Hamilton and Frederick Stopford at Suvla. There were others, too, who had no grasp on reality and their folly would be paid for in blood, other people’s blood. When you stand on Scimitar Hill you can feel the ghosts of the men burned to death as they lay wounded and helpless in the fiery scrub. Some men who were actually there heard the screams for the rest of their days. It may seem odd that I can describe a place with such relish in one sentence and yet recall horrors in another, but that is the essence of Gallipoli.

For the Yeomanry, ill prepared, undermanned and erratically led, the nightmare of Suvla was like the end of days. So many familiar faces and friends and too many good men from a gazetteer of a lost England came to grief for no gain whatsoever. They came from the Midlands, the west, London and the Home counties. Their officers were a mix of colonial war veterans and adventurous types doing their best in a flyblown hell.They really shouldn’t have been there at all but the Yeomany was infused with the volunteer spirit that underlined the old army the Great War was sweeping away.  Enthusiasm for the fight carried them on, but the determination of the Turks to throw the invader into the sea won through. Quite rightly, the author has never been anything other than respectful to Mehmet, the Turkish soldier, a man who endured the worst of everything to defend his homeland and won.

Dr Osborne tells a tragic story with thinly veiled sadness for the near pointless sacrifice of so many good men. His use of primary sources – diaries and first hand accounts – is a master class in how to tell a story well. Like the author this is a gently unassuming book that belies the flash of steel that runs through it. There are no frills or anything superfluous but there is an awful lot of love. Colin Smith’s charming pencil illustrations have a gentility about them that appeals. This is a wonderful book and the fact it comes from one of our own is immaterial. Quality is quality and that’s that.