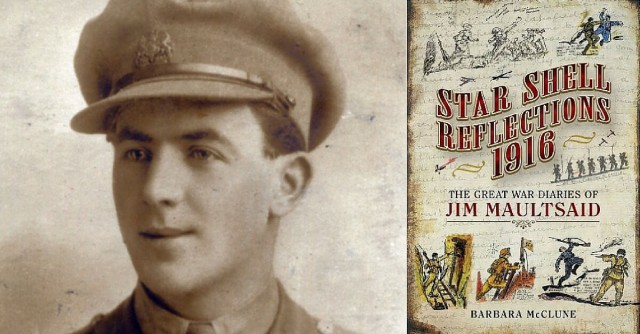 The illustrated diary of Great War soldier Jim Maultsaid of the 14th Royal Irish Rifles.  Born in the USA of Irish parents who had chosen to return to Ireland before the war began, he resolved to join up on 4 August 1914 and was soon in training.  Encouraged by his platoon officer, Lieutenant Monard, he kept and illustrated a diary from 1914 and throughout his war service which ceased with the 14th RIR when he was wounded on 1 July 1916.

Even after he had finished in hospital the Army had not done with Maultsaid, the unconscious humour in his short biography on the rear dust jacket flap is priceless: “Unfit for further active duty, he was commissioned in 1917…”  Finding himself an officer in the Labour Corps, Maultsaid continued his illustrated diary and kept it until the end of hostilities.  This book is volume one of the diary and deals with Maultsaid’s service with the 14th RIR, volume two is due to be published in the near future.

It is delightfully illustrated book, Maultsaid had a rare talent that enabled him to record events in sketches and in words. The sketches are of excellent quality and some are in colour, some were done in the moment and others were created later from sketches made at the time.

The text is divided into short sections with bold headlines that I found off putting to begin with.  However, these short paragraphs are well written and knit together to tell the story and I was soon reading it as a whole narrative. Every word has earned its place in the text and the overall effect is one of an illustrated magazine.

He and his mates went to the front in October 1915 and it is all there, the French towns, villages, civilians, bands, “vin blang…”, route marches, and for the intelligent and capable Maultsaid, promotion to full corporal.  His diary, like so many others, covers all of the salient points about a soldier’s life in the trenches and in billets but in Maultsaid’s case he could draw them as well as write about them.  Food, lice, rats, NCOs, officers and of course the shells and the Germans are all dealt with as few aspects of army life on the Western Front escaped Maultsaid’s eye.

He was promoted to sergeant and because he showed a skill with bombs he was put in command of a bombing squad.  He even met Haig himself while training with his bombing squad and put on a display of bomb throwing for the great man.  Maultsaid recorded that after the demonstration Haig enquired of the squad’s home town and when told Haig said, “From Belfast – you should all be good at this game.” Make of that what you will!

Maultsaid has been called an unofficial war artist and with some justification because he had a journalistic talent that should have been tapped into by a newspaper.  Indeed, he may have been better employed as a commissioned war artist than an officer in a labour unit, I would imagine that he did not have the right credentials or background for such a post.

This book is a valuable, visual record of Army life on the Western Front.  He created more front line sketches than a photographer could produce.  He went where the photographers of the day could not go, recording what he saw and he did it ‘on the spur of the moment’ and with a spontaneity that the war time photographers could not match, in much the same way that we use our digital phone cameras now.

It is evident in the way he says things and assumes a shared knowledge that he wrote this diary for former soldiers.  I think that Maultsaid’s comrades from the trenches were his real target audience, not us a hundred years into the future.  Nonetheless, it is good to see this illustrated diary published and among the current heavy bombardment of Great War books Barbara McClune has put together a work that stands out as something different.  A delightful (and I’ve never said that about a war book before) and very useful book to have on the shelf.  Let’s have the next volume, I’m looking forward to (literally) seeing what he made of life in a Chinese Labour Corps unit…