This is an accessible, detailed, readable and thoroughly researched book.  It is a clear analysis of the Serbs in 1914 and of their early war against the Austro-Hungarian Empire.  Eloquently written by a historian who has experience of the Balkans and a deep understanding of his subject.  The main theme of the book is that the little underdog state did well against the evil empire.  A common theme in all fairness but as Lyon rightly points out Serbia gave the Entente Powers their first victory of the war.  How much do we hear about that in the West?  Not much, until now.

Lyon says that Western historians always focus upon Austro-Hungary’s shortcomings without really analysing the Serbian response and capability.  Serbia’s importance in the war has been unsung but it tied down enemy troops that could have been deployed against the Entente Powers elsewhere and it blockaded the Danube causing no end of trouble for the Triple Alliance Powers.  Lyon says that Western historians have all too often accepted the Hapsburg attempts to exonerate themselves from the blame for the war and therefore have played down the resounding success that Serbia had in 1914 when its forces destroyed the Austro-Hungarian Fifth and Sixth Armies.  Therefore, Lyon has written an excellent book that seeks to redress the balance and place Serbia where she belongs in the line-up of victorious allied, Entente powers.

The first part of the book deals with the rise of war from the cauldron of the Balkans.  Politics, nationalist ideals and identity, intrigue and machinations, mass executions, hostage taking, transportation, refugees, atrocities and attacks upon the press that came in the early days of the war.  “A Sunday in Sarajevo” is a tremendous chapter; it is a highly detailed account of the assassination of Arch Duke Franz Ferdinand and the Duchess Sophie.  It is so detailed that the reader is almost there, on the day and at the centre of momentous and deadly events.  Serbian history says that the country did not want war and was unprepared.  Lyon tells us that Serbia in 1914 was a nation reeling from the material, financial and manpower losses of the first and second Balkan Wars.  Despite the fact that it had increased its territory in those wars it did not appear to be in any fit state to fight the Austro-Hungarian Empire.

After dealing with the political Lyon goes on to discuss the military forces that were engaged in 1914 and to compare the belligerents.  Serbian soldiers were experienced combat troops whereas the Austro-Hungarians were not.  The Austro-Hungarian army was well trained and well equipped with the latest gear, the Serbs were combat ready but with little in the way of modern equipment. Serbian mobilisation was swift, between four and six days and the Austro-Hungarians were not set up to fight Serbia, seeing Russia as a greater enemy the railways pointed in that direction.  Austro-Hungary wanted a limited war to avenge Ferdinand’s death and subdue Serbia before Russia could get involved.  They also hoped that this action would induce Bulgaria, Greece, Romania and Italy to join the Triple Alliance.  Lyon gives us a blow-by-blow account of military operations from the outbreak of the war in July through to December 1914.

The book is made up of eleven subdivided chapters and is illustrated with maps and photographs, copious end-notes, a good index and a superb bibliography.  Lyon has used numerous Serbian primary source documents to produce a compelling and engrossing book.  If you have no other books about Serbia and the Great War in 1914 on the shelf, you can do no worse than obtain this one.  It will, as the author has set out to do, redress the balance and give Serbia the place she deserves in the history of the Great War.  Excellent reading. 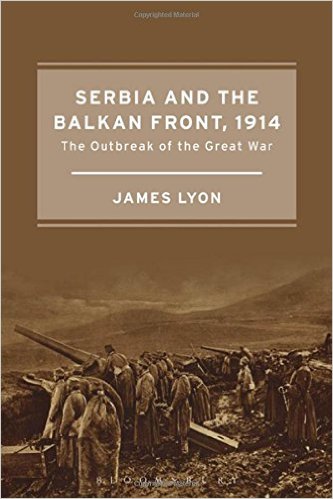