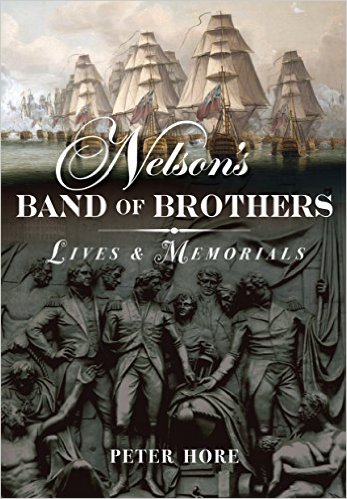 Admiral Lord Horatio Nelson possessed a genius for naval warfare and remains a towering figure of his age. His victories at the Nile, Copenhagen and Trafalgar, just part of his curriculum vitae; created the Pax Britannica allowing a century of peace and the pre-eminence of the British Empire which only withered with the exertion of defeating Kaiser Bill and then the Axis powers a generation later.  Nelson’s legacy lives in monuments and also in the many people named after him, deliberately or otherwise.

Nelson did not win his victories alone. He gathered round him a succession of often brilliant and generally sturdy lieutenants to put his bidding into action. They were the captains of his ships and he knew them as his Band of Brothers.  They have come to be seen as an elite but the truth is, as ever, more prosaic.

We don’t do a lot of 19th century history here at WHO, but this marvellous collection of pen portraits collated and edited by Peter Hore is a gift allowing us to appreciate a group of men who take their name from the prose of Shakespeare and who were war winning heroes a century or more before the soubriquet was appropriated for a modern audience by Stephen Ambrose.

This is a serious but very entertaining book with contributions from a long list of historians, some of whom are descendants of their subjects. Aside from the biographies we also see the memorials left to the men and the book concludes with a look at the Americans in Nelson’s navy and a look at the Captain-class of World War II warships honouring many of the Band of Brothers.   Mr Hore allows his contributors to be reverential and nostalgic towards some of their subjects at times, but the book does not descend into trivia. This is solid history first and foremost and being receptive to the education I have loved reading every bit of it.

Some characters are generally well known – Hardy, Collingwood and Troubridge being obvious contenders, but there is so much more and not all the men described were captains of the big first raters we recognise in HMS Victory. This is, of course, a story many of us will only have touched on thanks to the adventures of Aubrey or Hornblower, but these men were very real and are to be treasured.

Seriously, guys, I cannot recommend this book enough. It offers history, biography and a travel guide within it’s carefully measured chapters and I am so glad I asked to review it because this one definitely goes into my pre-Christmas ‘books of the year’ file.