Caraktère Presse et Éditions are based in sunny Aix-en-Provence in France. They produce a number of vibrant looking magazines filled with superb archive imagery and artwork on a range of military history subjects. Unfortunately my schoolboy French isn’t good enough to appreciate much of the text, so I am glad this colourful and dynamic book, typical of their style; is published in English.

We saw their look at German panzers towards the end of last year and this time round the publisher turns our attention to the Messerschmitt Bf 109 fighter plane. The book takes the reader through the history of design and development of the famous fighter before looking at the long sequence of production variants including a phalanx of differences in detail. The authors finish up by outlining the special versions of the aircraft and the appendices include a wealth of technical information.

Like the Mustang and Spitfire, the Bf 109 or Me 109 is an iconic aircraft of the Second World War. It is one of the immediately recognisable weapons of the Nazi arsenal and it’s reputation remains strong to this very day. It was an aircraft not without its share of problems and foibles and pilots learned to treat it with care.  But it was a proven killer by day or night and in the right hands it was practically unbeatable. Over thirty thousand examples were built but very few original aircraft survive.

As this book is dedicated to the aircraft we should expect it to look at the thing in considerable detail and readers will not be disappointed. Messrs Mermet and Ehrengardt seem to have left no rock unturned in their quest to tell the Bf 109 story and we really do get an A to Z of the plane.  The type might have been scuppered at the start because of hostility towards Willy Messerschmitt from within the German air ministry and even though his plane was superior it seemed likely that a rival Heinkel design would get the nod.  Common sense prevailed, however, and the 109 eventually gained its position on top step of the fighter design podium. Once in production it never looked back.

The 109 was the workhorse fighter of the Luftwaffe and is associated with a great number of experten who collectively scored a vast number of victories on all fronts.  All told it enjoyed a combat career lasting from the Spanish Civil War right until the dying days of the Third Reich.  Even then the story continued and even the Israelis operated Czech built Avia S-199 models while latterly Spanish Buchon HA-112 variants remained in service until the mid 1960s. A small number continue flying to this day with a fair number of movie appearances behind them.

For this book the authors concentrate on German built aircraft and each marque is outlined in detail supported by archive photography, technical diagrams and some attractive original colour artwork by Jean-Marie Gillou. The English text works very well with only the occasional minor wobble and these really do not detract from a genuinely pleasing book. Archive photography is well managed with the use of a good number of images I haven’t seen before. The artwork neither overpowers nor diminishes the seriousness of the overall package and I would suggest the publisher has got these details just about right.

The format of the book gives it the feel of an extended series of magazine articles but this suits me because I don’t think it is a book even a die-hard 109 nut will want to read from cover to cover in a single sitting.  This is another of the dip in and out books I have consistently championed on this page.

As with the earlier panzers book this one has heaps of style and it will appeal to aircraft buffs, model makers and casual readers alike. I like the feel of it and look forward to seeing more from this publisher. 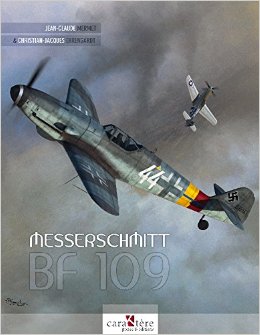