We have seen books by Michael Green here before and these two from the Images of War range are entirely up to standard.  This author’s books go the extra mile and are some of the more superior titles in this extremely varied brand.

Mr Green’s history of the M1 Abrams is a case in point. As with his previous armour related books in this series he has produced something wholly more substantial than many others in the stable.

He starts by looking at the post war development of tanks in the United States and elsewhere and we see examples of vehicles that bore an influence on the eventual design of the Abrams.  What I really like is the way the book progresses through design and development into the tank’s operational history, all presented in an easy on the eye style backed up by carefully selected images. While other books in this range might be considered a tad random on occasion, this one sticks to a tightly prepared script.

I have had the pleasure of seeing Challenger 2 and Leopard 2A6 on manoeuvres but have never seen an M1 Abrams in any situation. The tank is defined by the two wars against Saddam Hussein and although there is much more to the history it is the imagery of the Abrams in action in those wars that gives the tank something of an iconic status.  Just as philosophies change here in Europe where the future of the big gun tank has been questioned it is interesting to know what could replace the Abrams in US service. Mr Green points out that similar debate is taking place in the United States and money is another factor to remember. I get the impression these monsters will soldier on for many more years with the aid of regular upgrades and TLC.  Abrams have appeared occasionally on Salisbury Plain so I can only hope I may see one on the move one of these days.

As I said earlier, this book is more than just an excuse for tank porn. While there are some impressive photographs, all have been chosen to tell the story, not just to entertain.  Mr Green’s text describes the history and service of the Abrams in a readable and accessible style. The book is neither anoracky at one end of the scale or too generic at the other. I think I commented that one of his last books on tanks may have been out of place in the Images of War range and could have been an expanded and glossier history in it’s own right. I may have missed the point. Having a book of this quality in this range makes it affordable on one level and it adds a strong degree of credibility to the series on the other.

If you are interested in modern armour this book is a ‘must have’ for you. What it does is show how to put together an ambitious book to fit a specific format and make it all look so easy. Trust me – it isn’t as easy as it sometimes looks.

Next up is a look at the many infantry weapons in use by the armed forces of the United States during World War II.  This is another substantial book where considerable care has been taken over picture selection. The author has even resorted to using a small number of images of re-enactors to ensure the full story is presented in context. This is not only a little brave, but it really works and I am impressed. Because I have an interest in guns I was naturally drawn to a book that looks at so many.  Although the book offers the excuse to fill it with any number of images alluding to guns being cool, the author eschews this nonsense and presents the illustrations entirely in context.  There is a lot to learn here but the real draw is the images and I can’t fault any.

Just recently I reviewed Hollis Wright’s no nonsense account of his wartime service in the US Marines where he mentioned using a Reising sub-machine gun. In my ignorance I did not know this weapon at all, so I am really pleased to have the gap in my knowledge filled here by Mr Green. This illustrates the depth and quality of this book.

The coverage of the range of Browning machine guns and the BAR appear to form the spine of this book and I have to say it all works well. The author looks at a number of nominally obsolete weapons such as the Lewis gun and he dips into rare stuff like the Johnson LMG.  Springfield and Garand rifles get the attention you would expect and there is a good deal on the M1 Carbine and variants of Thompson sub-machine guns to keep us all entertained.

The book looks at everything from pistols to flame throwers and from rifles to anti-tank guns. There is an additional section at the end looking at the bigger kit rounded up in the infantry support weapon category and all in all the package offers a lot of bang for your buck.  I think you knew I might say that! This is another well-executed history from a consistently trustworthy author. I have no hesitation in pressing the ‘like’ button with this one. 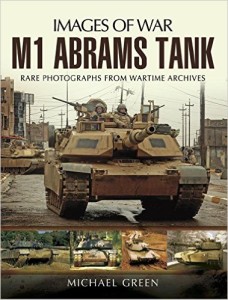 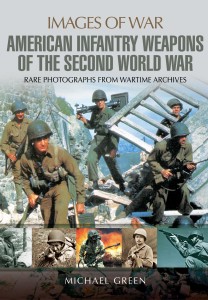