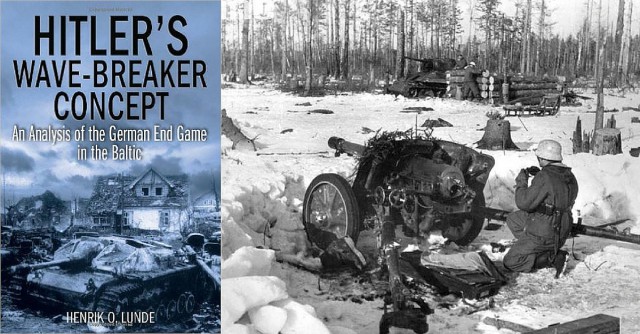 The gradual changing of the fortunes of war for the Germans, starting in late 1942, witnessed the transition from offensive to defensive operations for the Wehrmacht. As the forces allied against them grew in size and capability and the operational space diminished, the Germans were forced into ever more dynamic and reactive defensive measures, demanding decision making at the lowest possible level of command.

Fronts had opened in Italy, Normandy, throughout the East, the North and in the air and the capacity for OKW (Oberkoammndo der Wehrmacht) and OKH (Oberkommando des Heeres) to provide timely guidance and evaluation steadily diminished. This book evaluates and analyses one region, the Baltic, and how Hitlers command strategy for this vital region developed, influenced in no small part by his strategic perceptions and bias’. The author incorporates into his study, an operational analysis of the impact of Hitler’s command approach on the ability of the German Baltic forces to react to their dynamic environment.

The author maintains a three-pronged approach in his evaluation; each was critical to the results for the German Army. First he undertakes a study of Adolf Hitler the man and tactician. Specifically, he looks at Hitler’s history as a soldier, his perception of his own capabilities and his relationship with senior Nazi officials and Wehrmacht officers. HIs perceptions resulted in a flawed operational policy that squandered hundreds of thousands of his best soldiers in an effort to sustain a failing strategic policy.

Following this he evaluates the political dynamic of the Scandinavian region focussing primarily upon the two main players – Finland and Sweden- and their ongoing relationship with Germany as the war progressed. Lunde incorporates into this the economic, geopolitical and military aspects of these relationships and how they impacted Hitler’s thinking. Finally, he looks at the relationship between Hitler and his commanders and, more importantly, their ability to influence operational decision-making. It is telling the degree to which, even at the eleventh hour, they acquiesced to his flawed operational logic irrespective of their professional assessment of the situation within their regions.

Lunde’s arguments are both logical and easily followed. He has addressed a series of very complex facets of German leadership dynamics and international relations and presented them in such a way that, while the evident complexity is not lost upon the reader, it is not only comprehendible but also thought provoking.

For example, the relationship between Germany and Finland is extremely challenging and nuanced. With a battle-hardened army of over 600,000 soldiers, Finland was a key linchpin in the potential success of German force of arms in Russia but was also reliant upon German arms to ensure its safety from Russia. This inter-dependence increased as the war continued with Germany doing all it could to retain Finland as an active or at least passive ally in the conflict. The international dance between the two is fascinating to follow and expertly dissected by Lunde.

The lessons for political masters and military commanders in this book are numerous and they speak to the challenges of juggling operational and strategic balls concurrently. Lunde has written a very telling book about a region and a campaign that did not adjust to the changing strategic and operational realities on the ground. Casemate has published a high quality book and I would strongly recommend it for those interested in further appreciating the multi-faceted approach required in the interaction between international relations and military operations.

HITLER’S WAVE BREAKER CONCEPT:
An Analysis of the German End Game in the Baltic

Reviewer: Major Chris Buckham is an active duty officer in the RCAF.
He maintains a blog of his reviews at www.themilitaryreviewer.blogspot.com