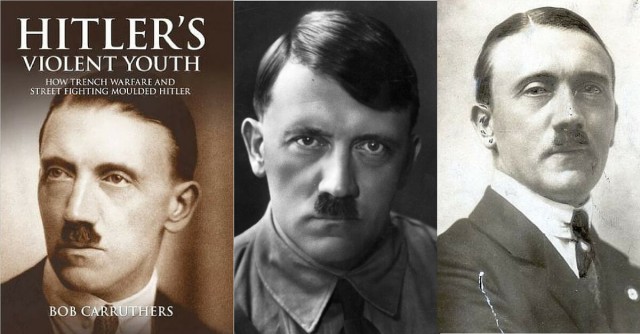 Once upon a time when the History Channel actually aired history-related programs there was a running joke in which the channel was referred to as the “Hitler Channel.” This is due to the fact that the Fuhrer took up such a large portion of the channel’s air-time. Arguably the most significant figure of the twentieth century, Adolf Hitler occupies an unparalleled place in the body of World War II scholarship. Because of the massive amount of Hitler literature, choosing a book about the megalomaniac German leader is not always an easy task. Bob Carruthers’ Hitler’s Violent Youth: How Trench Warfare and Street Fighting Moulded Hitler appealed to me because of its promise to delve into Hitler’s involvement in the First World War and partisan street-fighting during the 1920s.

Unfortunately Carruthers’ analysis is underwhelming. The first third of the book is devoted to relating information about Hitler’s family and childhood. Only in the seventh chapter—some 100 pages into the book—does the reader begin to encounter Hitler as a soldier in the Great War. This is unexpected because the book is marketed as an in-depth analysis of how Hitler was affected by the violence of World War I and 1920s street-fighting. The beginning chapters cover the usual territory found in any Hitler biography: his murky family history, his father’s name change from “Schicklgruber” to “Hitler,” and young Adolf’s disappointment at not being accepted into Vienna’s Academy of Fine Arts. The opening chapters have nothing to do with the book’s title, but are mainly the standard Hitler biography, with generous portions of Mein Kampf thrown in.

Similarly, the sections on Hitler’s involvement in World War I reads like a biography. There is little serious analysis of how World War I violence impacted Hitler psychologically. The impression Carruthers gives of Hitler during the war is of a physically unhealthy and withdrawn young man, who, through the course of the war develops into a dedicated soldier with a “keen appetite for soldiering.” Carruthers, a filmmaker from the U.K., whose Disney’s Dinosaurs: Myths and Realities won him an Emmy Award, finds no reason to doubt Hitler’s wartime record of courage on the battlefield. He cites several examples of Hitler’s valor in battle. While his analysis on Hitler’s inclination toward violence could be more robust, Carruthers nevertheless does convey some useful information. For example, he corrects the common misconception that Hitler was a corporal in World War I. In fact, Hitler achieved the rank of gefreiter, which was essentially an elevated private, but a rank that did not authorize him to give commands.

The strength of this book lies in its analysis of the role of violence within the fledgling NSDAP. Desperate for recognition, Hitler correctly calculated that violence was exactly what the party needed to make a name for itself. Carruthers traces the origin and early development of the SA, and shows how its aggressive stance won not only respect, but converts to National Socialism. Provoking violence with left-wing political parties, therefore, became a key strategy for the growth of the Nazi Party. For Hitler, “Die Saalschlacht” (The Battle of the Hall) in 1921 became almost a mythological event essential to the survival of the NSDAP. The book ends abruptly with a fairly standard telling of the Beer Hall Putsch. There is no conclusion—the narrative dealing with Hitler’s post-putsch imprisonment simply ends. It is almost awkward.

Hitler’s Violent Youth draws heavily from Mein Kampf and memoirs written by those who knew young Hitler. Sadly there are no notes or bibliography. Similarly, there is no index. There are, however, several rare photographs of Hitler with his List Regiment during World War I. Although well-written and accessible, this book falls short in its aims. Carruthers’ analysis is generally shallow. He presents nothing new, but rather rehashes the typical Hitler biography. In his introduction, Carruthers claims to fall in-line with functionalism, and this view can be seen by his pointing out how the NSDAP became increasingly anti-Semitic with the introduction of figures like Julius Streicher. In his view, Hitler evolved into a militant anti-Semite. Hitler’s Violent Youth is not without highlights, but on the whole, is disappointing. Then again, the book is historically accurate, and that is something that can’t be said about every Hitler book out there.