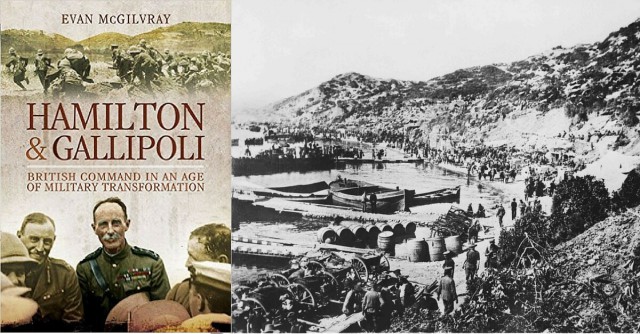 General Sir Ian Hamilton comes under the spotlight once again. It has been in vogue for many years to trash the Great War generals.  The stereotype of the aged, bumbling, and murdering ‘Blimp’ type British general officer has been a favourite of many.  Some in Britain and across the world still believe this stereotype to be true to life.  While a number of the generals at Gallipoli, Hamilton included, were old, out of their depth and (in some cases) useless, it is not a true depiction of all of the British generals in the Great War.  Sadly, Hamilton’s failure at Gallipoli fuels the general myth, even though the failure was not his alone.  Nonetheless, McGilvray’s book does not tread the old, worn path of ‘general bashing’, instead it seeks to re-examine the man’s character and give him a fair hearing.

McGilvray considers that Hamilton was a badly treated ‘patsy’ who had been deliberately set up for a fall by the British government.  There is some sense in this assertion, McGilvray demonstrates that he was a gentleman of the old officer school and does not appear to be the type of man who would make too much of a fuss, or ‘rock the boat’.  The MEF had little idea what to do, the planners and Hamilton had badly under-estimated the combat ability of the Turkish forces on the Peninsula and, crucially, the MEF was under resourced.

It is no secret that Hamilton always saw Kitchener as his military Commander in Chief rather than a senior politician and Hamilton’s relationship with Kitchener comes under scrutiny in the book.  McGilvray pulls no punches when it comes to Kitchener, he considers that the “Secretary of State for War behaved like a feudal baron.  He might also have been mad.”  I have to admit that during my research into British munitions production and the setting up of the Ministry of Munitions I came to the same conclusions.  Hamilton had to fight to get supplies and reinforcements for the MEF and even though Hamilton and Kitchener were at war, as McGilvray puts it, over said reinforcements and re-supply, Hamilton remained staunchly and strangely, loyal to his boss.  Kitchener should have carried some of the responsibility for the failure of the Gallipoli Campaign but he went to a watery grave in 1916, leaving Hamilton to shoulder the blame.

McGilvray shows that Hamilton was a complex character and to simply write him off as a complete failure is a mistake.  Hamilton was a snob and McGilvray cites as, one example of this, his mistrust of the East Lancashire troops in the 42nd Division.  Why? Because Hamilton apparently believed that a manufacturing area like East Lancashire had only a small population of gentlemen and therefore a majority of the officers in an East Lancs battalion would not be gentlemen, therefore their units could not be trusted.  I had to laugh!  Hamilton failed to handle some of the reporters who were embedded with his troops and with the Navy.  There are some who believe that the ‘gentlemen of the press’ were the authors of Hamilton’s downfall; they certainly helped to sully his name.   While McGilvray gives text space to the attacks by Ashmead Bartlett and Murdoch he also quite rightly places the blame for the man’s downfall on the establishment in London.  Personally, I agree with him that the British establishment had their knives out for him as soon as it became obvious that, without massive reinforcement, the campaign was a failure.  In fact some in the corridors of power had thought that failure was inevitable from day one. As McGilvray points out, Hamilton was not unaware of the attacks upon his name, but he always believed that in the end the truth would out, that he would be able to counteract the personal attacks and that he would be vindicated.  I believe that, once again, he underestimated his opponents.

This is a well-researched and thoughtful book that gives us a useful insight into the mind and character of the general who oversaw Allied defeat at Gallipoli. The book says that he was not the right man for the command of the MEF in 1915.  McGilvray tells us that he was a gentleman, that he did belong to the age of deference and that he was a snob.  Hamilton was a thoughtful man and he had been a good soldier in the pre-Great War British ‘police actions’ fought across the globe.  However, he was too old for his post and despite some modern ideas he was out of his depth in a citizen army fighting a modern war.  Nonetheless, he remains a fascinating character and the book has attempted to put a little shine on the general’s tarnished reputation.  At the very end of the book McGilvray concludes that “Hamilton was a good man, but never destined to be a great man.  That is his legacy – good but not great.”  There are some who will agree and those who will disagree and as with all things to do with Hamilton, this conclusion will engender argument. The debate about the generals of the Great War and the struggle for their reputations continues.  If you are interested in the Gallipoli Campaign or the debate about the Great War generals then this is a book for you.