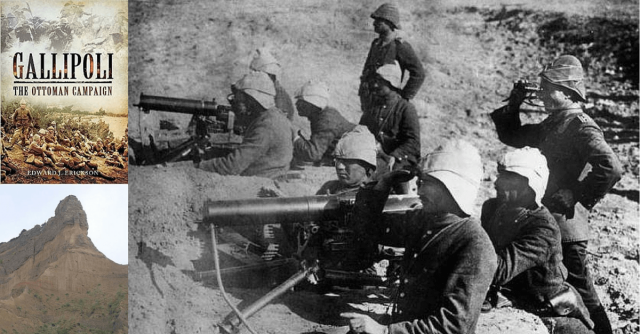 Much of history is based upon perception and not necessarily upon reality; such is the case with the military forces of the Ottoman Empire. Viewed through the lens of “the sick man of Europe”, the march of Allenby into Jerusalem and the drama and romance of Lawrence of Arabia, it is easy to overlook or forget that the Army of the Ottomans was actually quite successful against the combined militaries of France and Great Britain. The successes of the Ottomans in the First Battle of the Dardanelle Strait (1915), Gallipoli (1915), Kut (1916) and the First and Second Battles of Gaza (1916) are just as often credited to their German advisors as opposed to any integral capability. Erickson’s book, an operational review of the Gallipoli Campaign from the exclusive perspective of the Ottoman’s, does much to address this.

The author begins his narrative with a detailed analysis of the years leading up to the 1915 campaign; the experience of some of the key commanders (both in terms of training and combat), the lessons resulting from the First Balkan War (1912-1913), the upgrades to the fortifications of the Dardanelle Straits, the doctrinal adjustments made to the Ottoman Regimental system and the training regime of the Ottomans for their army. The last two are of particular note as the Ottomans changed their regimental system from a square (four battalion) to a triangle (three battalion) system. This was found to be a much more manageable and responsive construct (and one in fact that the allies ultimately adopted in 1918). Additionally, the author discusses the fact that the Ottomans mobilized their forces in July, 1914 (a full three months before commencing hostilities) and this, given that they were not actively engaged in a land campaign until Gallipoli, provided them almost an entire year of work-up training for their forces.

Erickson’s analysis of the battle itself is insightful and detailed. Drawing upon primary source material from the Turkish archives, he is able to trace the actions and decision making of the Turkish commanders and the actual role that the German advisors (such as Limanvon Sanders) played. It is interesting to note that over the course of the campaign, there were series of individuals relieved of command by the Turkish General Staff including German officers. The reader comes away from this analysis with an appreciation of the complexity of the operational and tactical actions of the Ottoman forces. Advances to contact, transfers of authority, reliefs in place both night and day, combined support operations, multiple operational reorganizations of forces, a detailed reporting system, proactive command and decision making and dynamic leadership by the officer corps all speak to a modern and competent military structure and hierarchy.

Erickson provides numerous maps that are of benefit to the reader in following the actions of the Turkish forces as the campaign unfolded; unfortunately, they are original maps from the Turkish archives and, as such, are very difficult to read and follow. Additionally, I would have enjoyed seeing more photographs of some of the key players in the Ottoman hierarchy such as BrigadierEsat Pasha and Enver Pasha. The bibliography is very extensive citing a series of memoires, primary (mainly from the Turkish military) and secondary sources that collectively provide the reader a plethora of options for further reading. The same may be said for the appendices citing command billets, ammo usage and orders of battle.

The author’s writing style is extremely engaging and easily maintains the reader’s interest. This is an operational study of this campaign and as such, does not contain many ‘personal experiences’ with some notable exceptions such as the valour of Corporal Seyit during the Battle of the Dardanelle Straits; this, however, is clearly identified by the author at the outset. This book would be an excellent addition to any library and serves as an outstanding counterpoint to the copious works on Gallipoli that speak only from the perspective of the Entente. 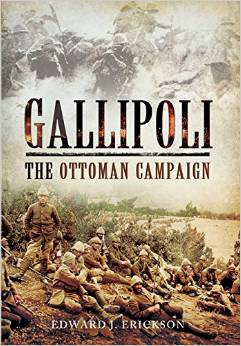 Maj Chris Buckham is a Logistics Officer in the RCAF. He maintains a blog of his reviews at www.themilitaryreviewer.blogspot.com