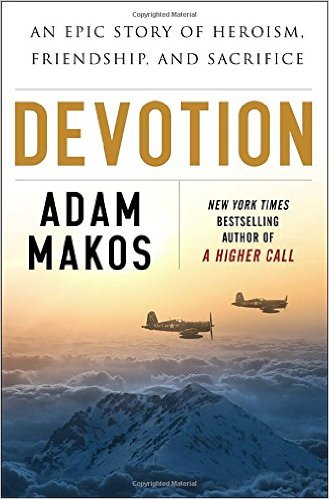 This latest book by Adam Makos has all the ingredients of a Christmas period chart topper. His track record is pretty solid to say the least and the hard work and professionalism that goes in is there for all to see.  This time round the author takes to events during the Korean War and the careful way he selected his tale coupled with some very neat backstory elements and meticulous sub-plotting is first class. Before I even get into the guts of the thing I can see potential for one of those stirring TV mini-series we get on the HomeFlixAzon channels these days.  The book has all the ingredients to engage a US telly audience and it would always go down well pretty much everywhere else. Watch this space.

The principle characters are to be admired, if not venerated. The circumstance of Jesse Brown’s career in naval aviation is remarkable in itself and it is not difficult to see why his legacy is so important even now. A white Englishman like me can only attempt to empathise with his experience of life as a second-class citizen even after he became a commissioned officer in the United States Navy. Nuff said. Tom Hudner is just too cool to be true but he is very real. Like a lot of bona fide heroes he comes across as an immensely straight up and humble man, almost embarrassed at his own excellence. This seems common in our war heroes regardless of the circumstances and nationalities.

A supporting cast of aviators and the sprinkling of marines included in the story are all good value for money and, as said, they provide the depth to the backstory that help make Devotion televisual or cinematic gold.  It even has a star turn from Elizabeth Taylor and who can complain about that?

At this point I have to talk about another book and that is the wonderful From the Imjin to the Hook I reviewed back at the start of the year.  I love both these books but the differences between them are stark. First off, Mr Makos is a professional whereas Jim Jacobs was writing a memoir. But, for me the major difference is in the chasm I often see between modern American and British history writing. For the benefit of a tuned in American audience there are elements to do with country and patriotism and the spirit of the Republic itself you just don’t get in British books. Yes, we do patriotism and the flags stuff and other things besides but it is just different. I find these comparisons interesting and offer no judgement. But does it still work this far away from the author’s base in Denver? It does.

Regardless of your postcode this story about a group of remarkable men is a genuinely rewarding read. The author knows how to paint a picture and his route to the critical mass of the story deftly handled. You will like the people and the imagery while the story of the Korean War is not one to treat lightly. Mr Makos understands how to use the war against the elements to mirror what men were doing to each other to build an almost 3D conflict for the reader. He is a very clever bloke.

On a stern reviewer’s note, I really liked the extensive use of archive photography and quotes from personal letters. The photo on the flight deck of the USS Leyte at the end is a classic. It all adds to the finished product. I made a point of doing no upfront research. I didn’t look Jesse Brown up on Wikiwotsit.  I wanted to read it to act as bookend to the memoir by Jim Jacobs. If you read them both you will recognise exactly the same Korean War with all it’s unforgiving elements; including a massed and uncompromising enemy to be feared.  Mr Makos and Jim Jacobs find different approaches to reach a similar conclusion. It’s all in the rendition and as with all good history telling the thing to do is smile and shout vive la difference!  If you are as passionate about your history as Mr Makos you will celebrate both styles. I certainly do.

Books about the Korean War are very important. They help dilute the impression of it being the forgotten conflict it largely is. Just a few years after the greatest and most destructive war in history, the belligerents were at it again, by fair means or foul. It was a different world to the one we know now when enemies were generally more obvious and espionage and skulduggery aside the way of warfare was much more conventional, comfortably familiar.

Even now we can look on North Korea with its huge parades and be-medalled generals wearing impossible hats and be a little smug. We hear stories of the disloyal being thrown to savage dogs and it would be so easy to settle on ridicule comparing the current leader with Monty Burns releasing the hounds or other one dimensional buffoonery.  The paranoia of the North is as dangerous as ever. Make no mistake. Jim Jacobs and Adam Makos recognise the sacrifices for Korean liberty made by ordinary people who travelled a long way to do what they did. One man’s police action is another man’s Armageddon. How our governments sold the war to the voting public are just details and we know where the devil resides, don’t we?

Ultimately this is not just a story about Korea or loyalty, it has a lot to say about America, too. I make a point of never intruding on domestic stuff.  Nonetheless, I found the story telling to be balanced and not a little inspiring.  Mr Makos is passionate about history and his own devotion is splattered across his book like a Jackson Pollock.

I was at the National Memorial Arboretum just recently paying my respects at the magnificent modern take on Stonehenge that is the memorial to Britain’s armed forces dead since 1945. The section for 1950-53 is lengthy. One day I hope to see the striking memorial for the Korean War in Washington DC.  Smaller memorials are found in books like this from Adam Makos. Of course his book is much more than a war story. But the heart of it is the bottom line thing about ‘greater love’ – for friend or country is not the issue.  In the end it comes down to intent. I suppose we all have different conceptions of true honour but for me there are bucket loads in this superior book and I hope it does well. It is a very American story and they will never go out of fashion.