Many years ago my ex-wife’s family tried their best to get her father to write his life story down but he refused. He was a solidly upright devout man, true to God and the standards he kept all his life. Memoirs were for others. He had served through World War II in the Merchant Navy and seen a few things to put it mildly. After that he was a policeman in London and yes, he saw a few things. But it stayed with him. Every now and again he would chuck in a colourful story over dinner and I sometimes wonder if the more sad ones were a test. But he died and took it all with him and now there are just memories of anecdotes and adventures of a good man who lived a full life.

I had him in mind while reading this wonderful book by Mr Hollis A Wright, Sr.

He has taken the time to recall his service in the United States Marine Corps during World War II and his account is full of genuine pride and not a little sentiment for what might well have been the biggest adventure in a long life. Forgive me, Mr Wright, I always assume experiencing a world war is a massive thing to have done but sometimes we  forget that a life of love; work and raising a family are of equal significance. These things are an adventure in their own way, too.

Mr Wright takes us from his enlistment and training at Parris Island and Camp Lejeune all the way to Okinawa and home again. He fills his book with episodes from his life from being a young impressionable Boot to his experience of combat and the miscellany of life in The Corps. This is a no nonsense account of what I suppose must be a typical marine of his day. He doesn’t waste time building in depth pictures of people he knew and I would imagine he keeps those to himself. I can’t blame him for that. Mr Wright is telling us about his war in his own way. Some of it has to remain personal and he chooses to keep it that way. So this is why I have my father-in-law in mind; there is a similarity here that is striking to me.

Mr Wright does not sell us short, though. He packs in the detail in a quite remarkable way and his ability to recall those crazy years in a clear style is impressive to say the least. It’s as if he knew he had to take it all in because it would only happen once. This, too, makes sense to me.

Anyone with half a brain knows that the US Marines were not an easy option for a young lad and the arduous side of life in The Corps is painted for us with clarity and not a little nonchalance. Mr Wright often remembers the smallest details and I picture him occasionally laughing to himself while he was writing this book when he recalled the things and people he chose not to share. ‘What happens on tour stays on tour’ is an appropriate maxim. I was pleased to see mentions of that fine old ship HMS King George V among all the US and Japanese vessels he names. It’s a minor point but it illustrates the attention to detail from first to last.

Mr Wright knows his book is not great literature. He is not a professional author by any means. But this book is important because it is so fresh and very real. I salute anyone who has the balls to go down the self-publishing route to tell their story and although they can be hit and miss all these accounts have a value. Every now and again one comes along that genuinely stands out and this is one of them. If you are a student of the commitment and sacrifice of  Americans,  from the Greatest Generation,  then you have to read this book. You will not find many like it. Outstanding. 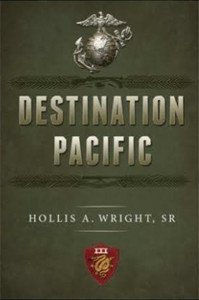