I might not be the ideal person to review this novel. I don’t like a lot of military fiction; in fact I don’t like much fiction at all. I am more at home with facts and knowledge and this comes from having an obsession to make up for the education I didn’t get as a lad. No sob stories here; I hated school and just didn’t try very hard. Like a lot of my peers I left at sixteen and went to work. My education started from that point onward. We live and learn. I have read a good deal of fiction taking me from Hobbits to the suave enemy of Spectre via the thirty-nine steps and the glory of Kurt Steiner and I’ve even managed some of the deeper stuff – but it isn’t for me. I use fiction to take breaks from solid history to reboot my brain from time to time and this seems like a good moment to take a look at this brave book from Steven B Howery.

The author is a veteran of recent wars and knows a thing or two about soldiering. An earlier novel benefited from his experiences and although I haven’t read it I am making the assumption he identified with the trusty maxim ‘write what you know’ to get him along. This time he steps outside his comfort zone to delve in to a dramatic period of military history with a saga set when British soldiers and engineers were developing the first tanks to be used in combat.

Now I couldn’t write a book like this and have respect for anyone sticking their heads above the parapet. Mr Howery is game and he picks the ball up and runs with it showing great confidence. The British Army of the Great War is not alien to us but it is from another time and place and using it as a device for fiction has its pitfalls. The author recognises the slippery slope of being an American writing a British story. Forgive the pun but it can be a minefield and while I am convinced it would be complete bollocks to suggest an American shouldn’t even try, the reverse must surely also be true. The fact is the English we use today is somewhat removed from the vernacular in currency during the Great War and it as foreign to many a modern British person as anyone raised elsewhere.  My point is the author recognises his audience have to be able to read his book, so he finds a delicate balance between the two worlds. This is not easy and I reckon he has made a really good go of it.

As it happens I was at a talk about the introduction of tanks given by a very entertaining retired lieutenant colonel of the Royal Tank Regiment only this week.  The legend of Hugh Elles and his men on their journey through mud and blood to the green fields beyond is a remarkable story in it’s own right. Like the author, I have had the pleasure of sitting in a Mark IV tank and I am sure like me he thought of those men of 1916 to 1918 and said something like “Good luck with that!” (or words to that effect!) They were amazing men who achieved great things and their pioneering spirit and sacrifice will quite rightly be commemorated in this, the one-hundredth year since tanks first went into combat at Flers during the Battle of Somme.

Never mind all that, what about this book? Mr Howery tells a story of a fairly standard anti-hero, first as a green infantry soldier wounded during the horror of the Battle of Loos in 1915 and from then on as a pioneering officer of armoured warfare. There are twists and turns and a love interest and I suppose we can say the book has all the essential ingredients.  The author throws in a number of real people from HM King George V to characters such as the singular JFC Fuller. This, too, requires bravery and it all seems to pass pretty well. I am worried I might sound a bit too like a Peter Cooke and Dudley Moore comedy sketch when I say I like the ending.

The author has done a good deal of research and his plot bounces along very nicely. The characters are developed with enthusiasm and aside from the inevitable twitches I have for odd lapses of language and detail I am content to say this would make a diverting holiday read whether you are doing it at Camber Sands or Waikiki.

Mr Howery has not converted me to military fiction but there are plenty of people who eat this stuff up and I found this an easy read for my commute into London. Like my daily journeys, the book rushes by and I was soon back in the real world.  I hope the author continues to plug away at this sort of thing. He knows how to build characters and plot and while he hasn’t ignored a few clichés, I do have to ask whether this matters at all. My feeling is it doesn’t. 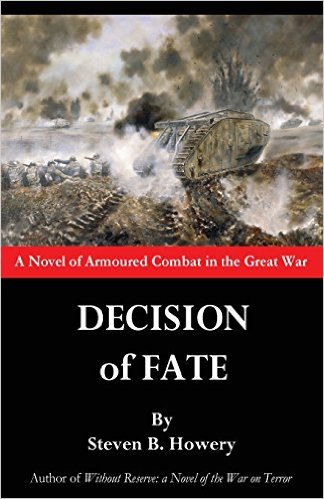