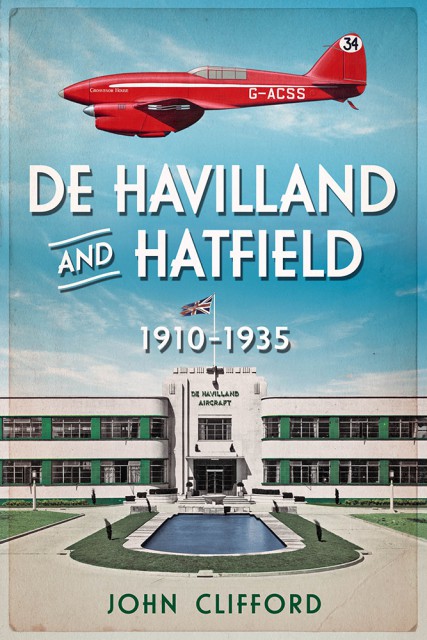 I only visited the De Havilland site once and that was long after it had been consumed into the dying monster that spawned into British Aerospace after a host of other nationalised aero industry names had withered and died.  It was a summer’s day and the projected highlight was the chance to see the newly restored DH88 Comet racer Grosvenor House put on a display. In due course that most beautiful of old birds got into the air and did its thing before suffering an unfortunate ground loop as it touched down. Up until then, she had only been an un-built Airfix kit to me and would be several more years before she was back in the air again.

It was hot and I was wearing new shoes of some sort that rubbed and my feet were sore. My girlfriend was bored (default setting) and so we sought out a bit of shade in a hanger where a number of BAe146 airliners were being finished off. A brass band was playing and it was all a little surreal. That, folks; is the sum of my memory of that curious day at Hatfield. The photos I took were average at best, although the black and whites from the hanger are quite interesting as 1986, I think it was; recedes into history. It was the year my nephew was born and he now lives and works in Shanghai. Time flies.

The hardy perennial fans of Saving Private Ryan, a film our founder Jack strongly believes was the catalyst for so much – including WHO; will know the old gem was filmed on the site at Hatfield long after the last aeroplane had been built and gone. I like the film, but would much rather they were still building aeroplanes there. In many respects De Havilland is a totem of a lost Britain and although I can’t get mired in that whirlpool of thought, it is fair to say that the loss of so much manufacturing excellence only for it to be replaced by armies of call centre agents and baristas is not real progress.

This lovely book by John Clifford will let you into the world of De Havilland and it’s connection with the old town of Hatfield. It does a lot more than that because we see all the strands of how the great name of De Havilland came to be and it’s links with a great deal more of British aviation history.  The book isn’t an anorak’s progress because it is more interested in the people who made it than the aeroplanes – not that they are ignored. Although it feels like a local history book in both look and prose, there is a lot going on here to take the book out of Hertfordshire and I found this to be a pleasant surprise.

‘rock family trees’  for one of the music papers and there is an element of that to this book. At the time I worked for the Melody Maker I was really crazy about classic aviation and it was so cool working for a publisher who also produced Aeroplane Monthly magazine where I could read the stories of John Stroud and Alex Henshaw. They both feature regularly here. As I said, all the strands come together.

To be honest with you, there is a lot more civil than military aviation history in this book, but I am guessing a volume progressing beyond 1935 will have a change of emphasis. I sincerely hope we get one from the author because this book just oozes nostalgia and there is a lot of detail betraying an immense amount of research. The exceptional array of archive photography adds to the quality of the package. Right from the off we see gems, including a lovely portrait of Geoffrey De Havilland by EO Hoppé, the one time mentor of a Heinrich Hoffmann, the personal photographer of the man who sent his Luftwaffe to flatten the very office the picture was taken in. There is also a photo credited to The Times I need to investigate further when I am at my day job. I do love these connections.

This is one of those quiet books that might have slipped under our radar. Fortunately we are able to alert you to it. Take note.