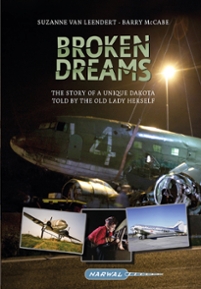 Our friends at Narwal are known for their unique style and spirit which I have told you before is quite infectious. This latest book from their stable continues the methodology using a difficult to execute device to tell the story and happily the authors manage it with aplomb.

This is the story of a Douglas DC-3 built in Oklahoma City that entered into USAAF service in 1945, too late to take part in any significant events from the European war, but went on to have a sterling career with the French Air Force and Air France before being passed down through a succession of smaller operators.

The aircraft operated in Europe and Africa right up until the end of 1970s but in 1981 it was severely damaged during a storm and ended up mounted on a pole at the Victory Memorial Museum in Belgium where it was painted to represent a D-Day aircraft complete with invasion stripes and a fictitious serial number. The DC-3 stayed at the museum until 2002 when it was being transported by road when it was badly damaged in an accident. After a number of other adventures the remains of the aircraft were dismantled and at this point our Dakota Hunter friend Hans Wiesman enters the story.  I hope you are all reading his blogs on WHO!

This fiercely individualistic book is a great deal of fun and a very nice read. The photographs are up to the high standards we expect from Narwal and the look of it is very appealing.  While I enjoyed it immensely I would seriously suggest it is perfect for youngsters with a strong interest in aviation. This book makes learning fun and if this was a specific intention of the authors she they have been very clever. Whatever the motivation is a simple piece of very good storytelling.

Ok, Broken Dreams is a book about a plane, right? Yes and no. The book is really a story about people. We meet the ladies who built DC-3s and the people who flew them during the classic post war era. A good number of people directly involved with the aircraft throughout its life appear and the result is a very rewarding and tangible piece of history. It is unusual, but that is the point and I have to say it charmed me from first to last.

I really like this book and I am especially pleased the Narwal chaps managed to sneak in a photo of a Renault 4 van.  In addition the book offers a different perspective of the work of our friend Hans Wiesman and that is pretty cool.  Suzanne van Leendert is a documentary maker and her film of the book is also available.  Double prizes!