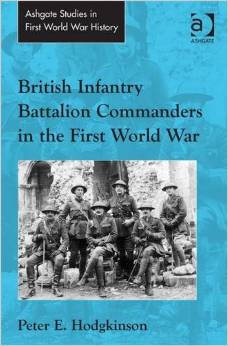 I have to start by admitting that I know Peter Hodgkinson and the series editor John Bourne.  Interest declared; on with the review!  Peter’s book is an informative, academic, PhD research project into British infantry battalion commanders in the Great War.  The book charts, in depth and in detail, the evolution and development of the battalion commander and the battalion command system in the British Army during the Great War.  Written originally as a PhD, the book’s footnotes, bibliography and index are excellent and comprehensive.

At the outbreak of the Great War battalion commanders in the British Army were from privileged, wealthy or military and professional backgrounds and were all of a certain age.  Dealing with the notion of the caricature of the ‘old duffer’,Peter examines the statistical chances of officers attaining battalion commander rank and sketches out the experience of army officers in the Empire’s small wars before the outbreak of the Great War.  The stereotype of ‘dugout’ CO, which has become entrenched in mythology, had some basis in fact but it was a situation that was almost unavoidable and recognised at the time. The war experience of battalion commanders in 1914, either in post or recalled to the Colours, was not of major, continental warfare.  Peter demonstrates that this was an issue that had been identified by the government and military as far back as 1900.  However, not all of the battalion commanders in post in 1914 were ‘duds’, far from it.  A number of them in 1914 were destined for brigade and divisional command later in the war, replacing men who were, for one reason or another, no longer fit for higher command.

In the book,that spans the war in eight chapters, Peter uses a number of individuals to illustrate his research points.  While regular soldiers retained command of regular battalions, civilian soldiers rose through the ranks to command ‘Service’ battalions.  For example, among others, he cites the remarkable careers of George Henry Gater and Edgar Mobbs, both civilian volunteers who, being natural soldiers and administrators (the latter skill is crucial I think), rose to battalion commander rank.  I found it very interesting that Peter has discovered that Territorial Force officers were practically discriminated against even towards the end of the war.  I had thought that talented officers from the TF were treated very much the same as talented civilian soldiers by 1918 and were employed in the same logical fashion.  As an aside I find this intriguing and worthy of some more research, proving that the PhD is serving its purpose to stimulate further work.

What the book says is that the battalion command structure and talent of officers was improved as the war went on.  The lessons of the ‘steep learning curve’ of the new type of war were implemented by the British Army and inevitably the command systems also improved.  As the war progressed men, trained in platoon and company command in trench warfare, rose to command battalions taking their experience, expertise and knowledge with them.  The pool of talented officers had of course increased with the arrival of civilians in the ranks of the army.  Peter’s research demonstrates that a number of these men were attaining battalion command by the last two years of the war and were doing a good job of work.

It is interesting to see that regular soldier Major-General Pilcher, former CO of the 17th (Northern) Division, gets a mention.  He ‘got the push’ during the early days of the 1916 Somme Campaign largely because he was out of his depth as a divisional commander in a modern war situation.  I know a bit about that division and Pilcher; he is an interesting case in point. Pilcher (known variously as ‘the Sardine’ and ‘Von Pilch’) was appointed as a divisional commander by the War Office in January 1915.  He was then replaced in 1916 by a man who had been a battalion commander in 1914 and who had subsequently seen action as a brigadier, Philip R. Robertson.

This is certainly a book for those who are interested in the evolution of military systems, processes and the British Army’s ‘learning curve’ in the Great War.  Well written in an accessible style I recommend it as a good and fascinating read but I have to warn you that the hardback and Ebook are not cheap to buy! Be that as it may, Peter’s work fills a gap in the on-going research into the Great War and is well worth reading.  I wish him and his book all the very best.