The WHO Towers in-tray is bulging with some stunning looking photo archive books and I am pleased to introduce this one to you. Zenith Press seem to have taken the genre by the scruff of the neck and it is you, the reader, who benefits.

These books are predominantly about American subjects but good histories need no borders. This is an outstanding book.

We get a truly wonderful photographic essay of the Fifteenth Air Force supported by a very readable text. The author is no stranger to the Fifteenth and although I haven’t seen his previous work, I can see this one expands on his earlier book. He takes us through a series of events picking out people and actions to offer a narrative of war experiences. There isn’t much of a preamble and the author, Kevin A Mahoney, gets straight down to business. He tells his stories well, but the stars are the photographs and it will surprise many people to see so many standard images – recognisable classics – of the bomber war here.

The Fifteenth Air Force fought its war in southern Europe, reaching out across enemy and occupied territories to places the bombers from England could not easily reach. Although there is no question the Fifteenth are something of a bridesmaid in the history of the bombing offensive, do not be fooled. This was no sideshow. It is a well-known fact that the troops fighting in Italy were given a lot less credibility than their brothers who landed in France. The D-Day Dodgers tag has become something of a badge of honour to the men who fought the Germans in Churchill’s Soft underbelly of Europe. When you look at the events covered here it is crystal clear why the air war fought in the skies over Italy and her near neighbours was anything but soft. Over the course of fifteen chapters (clever stuff!) Mahoney gives us a real insight into the achievements of the Fifteenth – and there are many.

The book shows the vulnerability of the B-24 Liberator and we see many in peril, catching fire with ease or breaking up. I have to admit this was an aspect of the aircraft I did not know about and it gives the men who flew the things even more kudos in my view.  Images of Liberators fill many pages in this book, but all the other classics are included. However, the real story is about people not machines and Mr Mahoney introduces us to some remarkable individuals.

The photography is outstanding and there is an awful lot to look at and admire in a weighty, large format package. This is an old-fashioned coffee table book if ever there was one and I am always happy to see publishers showing a bit of ambition by producing books on this scale. In actual fact, the history deserves it. The package reminds me of days past in the newspaper business when we still had film cameras and darkrooms. Many picture editors would order photographs to be printed on larger paper – pick your own size: A3, 20”x16” or sometimes bigger, to impress the editor. They thought big and so does the designers of this book. The page artists at Zenith Press continue to build on their impressive track record by allowing the images to speak for themselves. There are few frills but a bucket load of style. This book is as cool as it looks.

I’m really not sure I can say anything else. I get a bit verbose at times and there will always be other books that make me ramble on. Not this one.  If you are interested in the bomber war or the campaigns in southern Europe then this is a must have book for you. Perhaps you are keen to learn about lesser-known exploits of America’s Greatest Generation. If so, you have come to the right place.

Mr Mahoney’s book ticks all the boxes.  Recommending it to you is a no brainer. 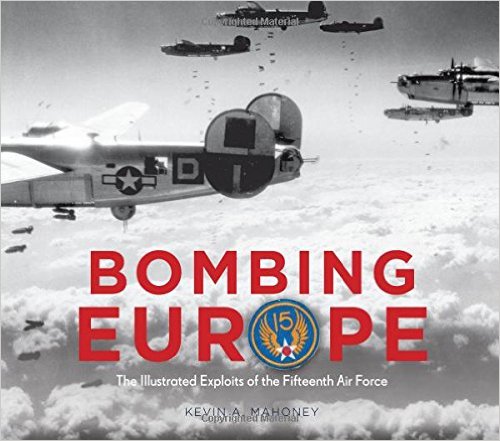