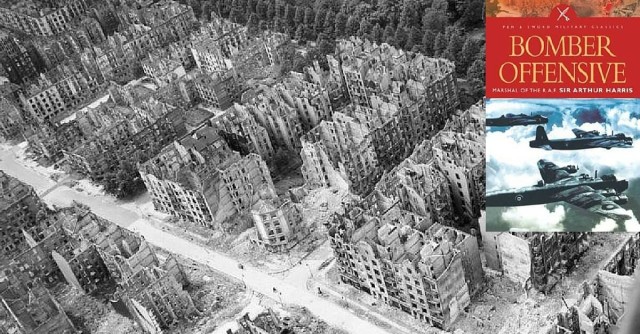 Bomber Offensive: Marshal of the RAF Sir Arthur Harris is the memoir of Sir Arthur Harris, who served as Air Officer Commanding-in-Chief of RAF Bomber Command from 22 February 1942 to the war’s end in 1945. It is a personal account of his life and career that offers an insight into the formative years of the RAF but lacks – as one would expect from its notoriously obstinate and self-assured author – a balanced discussion of Bomber Command.

The book begins with Harris and his wife visiting friends in Norfolk, just before the outbreak of war. He describes hearing Prime Minister Chamberlain’s ‘uninspired’ and ‘uninspiring’ declaration of war on 3 September 1939, adding that it was ‘about as stirring as a schoolmaster confirming the fact that mumps had broken out in his prep school.’ Harris’s harsh criticism reflects how deeply unpopular Chamberlain’s appeasement had become.

The Harris of 1939 then predicts that the war would last five years, correctly believing that Britain’s ‘full effort’ was required to stop the ‘Boche’ and ‘considerably more’ to defeat them. He had even less confidence in the French, claiming that they had neither the resources nor the heart to fight. This is quite true, France fell in in six weeks, but one suspects that Harris enjoyed the British penchant for Francophobia. Indeed, a variety of nationalities feel what Max Hastings described as Harris’s ‘dry, cutting and vulgar wit’ during the memoir’s 288 pages.

After all of this informed pessimism, Harris concluded that ‘air bombardment’ was the ‘only one possible way’ of defeating the Boche, predicting that it was going to be a ‘straight fight between our own and the enemy’s production of heavy bombers.’ Hindsight, they say, is 20/20. Harris clearly benefitted from this whilst penning Bomber Offensive, but he admits that he foresaw neither the entrance of the United States nor the Soviet Union . These were crucial oversights, because the Russians would be far greater deciders of the war than Bomber Command. However, the Soviets did owe some of their success to the RAF and USAAF, whose operations over the Reich drained German resources on the Eastern Front.

After ‘drifting’ into the RAF, Harris’s unshakeable belief in aerial warfare and contempt for the Royal Army took shape during his service in the brutal Waziristan area of the then Indian-Afghanistan border. It was here that he experienced first hand just how woefully inadequate Britain’s air force could be – ‘We lacked everything in the way of necessary accommodation and spares and materials for keeping our aircraft serviceable.’ General Billy Mitchell ruffled the US Navy’s feathers when his bombing trials in July 1921 demonstrated the power of aerial warfare.

Bomber Offensive‘s insight into the RAF’s formative years in the Indian sub-continent exposes an animosity between the services that’s very similar:
‘…the General made some unpleasant and entirely uncalled for remarks to the effect that airmen could never do anything unless they were coddled to the point of living in the lap of luxury.’

Above this petty class-fuelled bickering is Harris’s main point of contention – the army’s lack of innovation. Harris jokes that the army’s unofficial motto was ‘be orthodox or perish’, explaining that ‘being orthodox appeared to mean holding on to every tenet of warfare that had turned out to be a busted flush between 1914 and 1918 and ignoring all subsequent technical development.’

Harris vividly recalls his experience of the Blitz years later. Whilst standing beside Charles Portal on the roof of the Air Ministry, Harris remarked that ‘they were sowing the wind’, suggesting that the Boche would soon reap the whirlwind. It was during this scene of destruction that Harris felt ‘vengeful’ for the first and only time. It wouldn’t be unreasonable to suspect that Harris felt vengeful many more times than this, especially during the bombing of Hamburg and Dresden.

Perhaps it was vengeance that caused Harris to forget or ignore that much of the dense working class population of Hamburg he was targeting had been no friend of the Nazis – the northern port city constituted one of the strongest Communist electorates in the country.

Harris details the destruction Hamburg faced and that it terrified the Minister of Armaments Albert Speer. Harris is fond of referencing Speer throughout the book, but he was rather selective with his references; he doesn’t mention that after his initial terror, Speer would later remark: ‘The total damage suffered by the armament programme as a result of air attack during the year 1943 was not considerable.’

Harris reminds the reader that bombing German cities was immensely dangerous. He is deeply emphatic of the bravery and sacrifice of the men under his command: ‘There are no words with which I can do justice to the aircrew. Such devotion must never be forgotten.’ Harris was doubly earnest in his praise of Bomber Command because they had received only a ‘Defence’ medal, rather than a unique Bomber Command campaign medal, which he had asked for at the war’s end.

At the time of writing in 1947, Harris stated that this snub was the ‘subject of much bitter comment’. It was so bitter, in fact, that Harris had refused a placatory peerage offer from Prime Minister Attlee in 1946. This reflected that even in the immediate post-war period, Bomber Harris’s reputation was already controversial. Harris would later accept a Baronetcy from Churchill in 1953.

Naturally, Bomber Offensive does not offer an entirely balanced account of the Allied air campaign because its author was far too integral to the subject matter to be impartial. It remains, however, a valuable primary source on aerial warfare, as it details the RAF’s formative years and provides much insight into the charismatic figure at the centre of perhaps the most controversial campaign of the Allies’ ‘good war’.