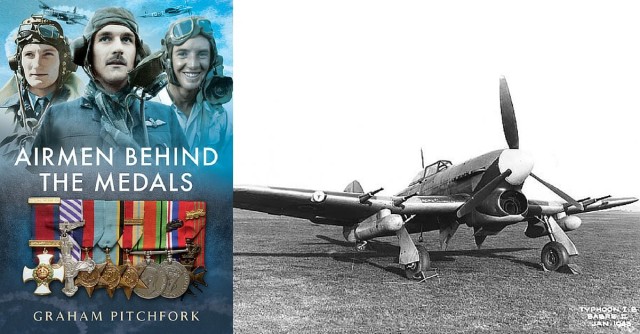 Graham Pitchfork is a prolific author and happens to be a retired air force officer of vast experience and he brings all this to the books he writes. His no-nonsense writing style is very appealing and you can rest assured that attention to detail and empathy with his chosen subject matter is all there. This latest book is a series of pen portraits of airmen who were awarded medals for their gallantry in a range of circumstances during the Second World War.

The author starts out by doffing his cap to the late Chaz Bowyer, a writer who produced a huge range of books thirty years or more ago and whose influence on authors and enthusiasts for aviation history is as strong as ever. This book is very much like some of Mr Bowyer’s work and fits well with the books by him I remember buying through an aviation book club long before the wonders of the age of the Internet. I still have most of them and would never let them go.

Pen portraits work well on two levels inasmuch as they can provide just about enough about a person to do the job and they can also act as an entry into a subject that takes the reader further. I see a number of books about military personalities and it is sometimes the case that a full biography loses something in the way the story is almost diluted by fitting in elements that are nice but not necessarily essential. So, I am strongly in favour of books like this one. They are episodic and you can go back to them, but they are valuable additions to the libraries of those of us interested in whatever field happens to be on offer.

Mr Pitchfork introduces us to twenty-one airmen who are all pretty special and he does a good thing by not confining himself to aircrew or a particular strand of the conflict. He brings to light people of various ranks and roles including a doctor and an RAF Regiment NCO and treats them all with equality and respect.
We get the usual mix of pilots and aircrew doing immensely brave things but we also see people who just got on with it over periods of time and who showed consistent valour and fortitude. These are people to admire.

There is a useful chapter on the medals available to airmen and although the author avoids the Victoria Cross (a good thing in my opinion) we are introduced to some very brave individuals who deserved the recognition they received. Some should probably have earned a bit more.

The photographs include images of the men recorded here along with a series of colour shots showing their medal bars. I don’t collect medals and would never start but seeing them all like this is very impressive and not a little stirring. Medals are nice, but the people matter more and Mr Pitchfork has done a really good job here. This isn’t an exciting book with overblown tabloid newspaper style writing, it is solid history well told. I never have any difficulty recommending books like this. They tick all the boxes and keep something of the people they feature alive and I really like that aspect. 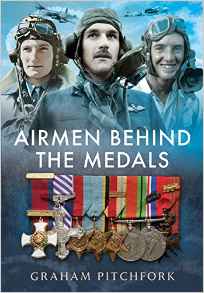