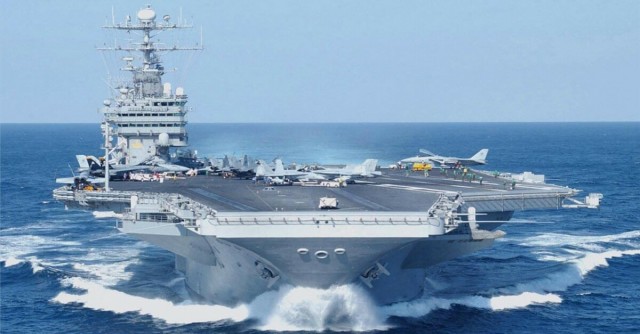 The nice people at Zenith Press in the United States have been mailing me books via UPS for a while now and I always manage to miss the delivery guy and have to pick them up from an office not far from my house. There have been a number of new titles in recent weeks and the chaps at the office are getting used to me rushing in before they close for the evening.

A case in point is this wonderful book from Michael E Haskew, a pleasingly and balanced history of the aircraft carrier that looks at all the types, past and present. Mr Haskew seems really at home with his subject and while I liked his history of tanks we looked at a while ago, he seems on much firmer ground here. A nautical analogy might have worked better, but you get the picture.

The book takes us from early experiments with landing aircraft on stationary ships, a feat first achieved by the US Navy, right up to the leviathans in use today. Suffice to say it is the US that dominates this book, but the author also gives plenty of space to the British and Japanese. These three nations have a defining place in the history of aircraft carrier operations but Mr Haskew takes time to look at others including the ill-fated Graf Zeppelin built for Hitler’s navy and which never spent a day in service. Post war French carriers are not ignored and my son James smiled when he saw the Charles de Gaulle pictured at Toulon because we saw her there some years ago along with the sad old Clemenceau. Riddled with asbestos, she was waiting to be scrapped and eventually found her way to England, of all places, where specialised recyclers did the job.

The major breakthrough in pioneering naval aviation was achieved by the Royal Navy with a landing on a moving ship made by the unfortunate Edward Dunning. He was drowned repeating the manoeuvre just days later. The Royal Navy built the world’s first aircraft carriers and I am pleased to see the giant HMS Queen Elizabeth given some prominence. Britain’s new carriers have been controversial for a bucket load of reasons and doubts about their future persists. The first ship is due to be commissioned in 2017 and will be ready for active duty three years later. A second ship, HMS Prince of Wales, is under construction.

A book like this cannot ignore the great carrier battles of World War II and rest assured it doesn’t. The author has clearly bought in to this era and I am with him one hundred per cent. He shows how the aggression, ambition and technical skill of the Japanese could only be met with equal innovation and perseverance allied with overwhelming force. Only one nation was able to achieve this. The primacy of the United States Navy has been beyond question ever since and it is a status never likely to be challenged.

Much to my regret I have never seen one the Nimitz class carriers but hopefully I will remedy this one fine day. In fact the only US carrier I have seen is the USS Intrepid museum ship in New York City. What a treat that was! Of recent British carriers, I saw the dear old HMS Eagle being stripped of useful stores at Portsmouth after she had been decommissioned way back in the 1970s and I got some nice pix of HMS Ark Royal during a visit to London thirty years ago. She has long since been turned into razor blades. Her sister ship HMS Illustrious paid a final visit to the capital last year and I was unable to see her. It is a disappointment that stays with me.

I’ve previously sung the praises of Zenith’s use of archive and modern photography in their books and this one truly lives up to the high standards of the innovative art department at this publisher. I have other books from them to tell you about. Believe me, they are superb. These books don’t just look great, they read well and whoever buys them is assured of value for money. I suppose the word I am looking for, here, is lavish. I do like a coffee table book that has substance as well as good looks and I am pleased to say the books I have seen from this growing range of titles have all been on the button.

Mr Haskew’s history is relaxed and easy to follow. He seems to have nailed this kind of book and I hope any future titles written by him can match the quality on view here. This book has the effect of making me want to know more about aircraft carriers. I think naval books have something about them different to other aspects of military history. It really is the case that the great Battle Fleet of the Jutland era Royal Navy has given way to the modern carrier fleet of the United States. This book as a photographic history is irresistible. Give in to it. 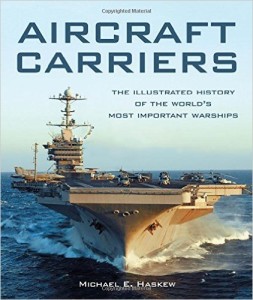