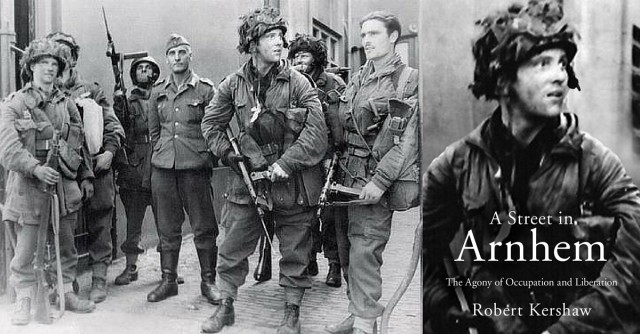 Like a lot of people my exposure to the epic of Arnhem began with Cornelius Ryan in 1974 and I still have my original copy of a much treasured book. There have been others, of course, and while I haven’t been obsessive I have worked my way through a good number and the vast majority remain on my bookshelves. There is something about Arnhem and all of Market-Garden that is so beguiling. My most satisfying moments photographing living history displays have been representations of aspects of the operation. I suppose I have an affinity to it.

If you do start with A Bridge Too Far you will appreciate that however superb Cornelius Ryan’s book was, his style of writing was an effective mask of just how visceral the fighting became in the confines of the city and its environs.  You may have read books by Charles Whiting and some recent histories or even the factional account of the shadowy Zeno. The treatments by Polish veterans make for good reading. In this book by Robert Kershaw, historiography has come on leaps and bounds and the truly horrific nature of the combat is plain to see. I was probably just more naïve as a teenaged reader, but all those conceptions are long since lost and any residual notions are fully exorcised by Mr Kershaw. His telling of the story is as enthralling as it tragic.

His device is to describe events of the war effecting one street. We start with the German occupation of the Netherlands and how an affluent leafy suburb faired under the jackboot.  But the guts of the thing is Market-Garden and the vast majority of the drama takes place over that awful week in September 1944 when the inhabitants met with triumph and disaster as it crashed down on the Utrechtseweg. The book ends with the ground assault of April 1945 and there is room for memories of the classic Theirs is the Glory.

The detail of the false hope of the British assault and then the gradual misery of its utter defeat is told with some style and I found the complexity of the story very easy to follow. Despite being a former Para, the author shows an admirable restraint and his account is evenly balanced. I found the German elements fascinating and the stories of Dutch civilians to be quite heart breaking. Having been on the pivotal crossroads in Oosterbeek and walked along to the Hartenstein I have a basic feel for the geography. For this I have to thank my friend and colleague Joris Nieuwint, who lives and breathes the battlefield.

Operation Market-Garden, “ninety per-cent successful” or otherwise left the occupied Netherlands in the hands of masters who were vengeful at worst and indifferent at best to the suffering of a populace left to starve. This is the true tragedy of Monty’s failure.  There are so many ‘if only’ moments about the venture. The most prescient being if only it hadn’t happened.  Victories may win wars, but defeats make them much sweeter.

It would be easy to pigeonhole Ian Allan as a publisher who only deal in trains, planes and automobiles; but this book shows there is so much more to them. This is a really super book and if it impacts on you as it did me, then we will all have come out of it with a much deeper sense of what the nightmare of Arnhem was really like.  I cannot recommend this book highly enough.