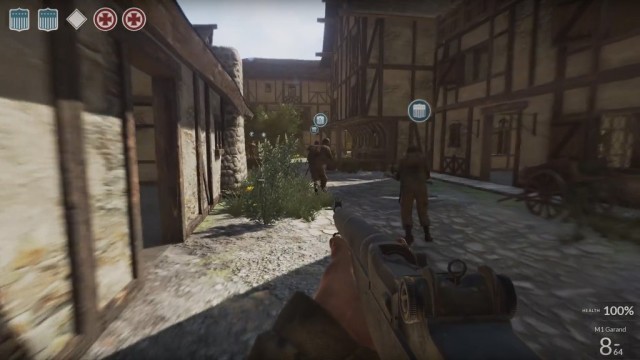 Days of War is an online multiplayer shooter releasing this summer that aims to revive the style of classic WW2 shooters from the 2000-2010 era using Epic Games’ Unreal Engine 4.

In Days of War, bullets are what matter, not kill-streaks, not wall jumps, and certainly not drone strikes ordered from iPads.

Here is a preliminary render of the Sten Mark II.

Days of War is built for one reason only: the developers want to play Days of War. We can’t wait to get this game out there so we can start playing with you.

Competition above all else. The only way to gain an advantage over your opponent is a more accurate shot, or a better strategic position. Sharp corners, fast movement and powerful weapons: Days of War is about cold steel and hot lead. You and your rifle, no more, no less.

Immersive gameplay and environments. Physically based rendering from UE4 means hardware is the only limit to the realism we can achieve. Motion captured animations add a subtlety that you can’t always see, but you can always feel. Every weapon has been handcrafted to ensure you feel like you are back in WW2

Gameplay variety. Whether it’s the tight alleys of a French city or an exposed expanse of Belgian forest, different maps require different strategies, skills, and weapons. Game mode variations include domination, capture the flag, search and destroy, and deathmatch

Class-based combat. Each man has his role and each team has six classes: Rifleman, Assault, Support, Machine Gunner, Sniper and Rocket. Each brings a strength and weakness to the battlefield so compliment your teammates wisely

Deep support for modding and player content. Custom map creation, editable rulesets and dedicated server hosting tools. Tune Days of War to be the game you and your clanmates want it to be.

Back this game on Kickstarter!

Back this game on Kickstarter!