Divers from the Army conducted a unique and poignant internment when they lowered an urn containing the ashes of Lauren Bruner into the wreck of the USS Arizona.

The took place on the 78th Anniversary of the attack on Pearl Harbour.  Mr. Bruner died aged 98 on the 10th of September 2019.

Lauren Bruner, who served on the USS Arizona, escaped being burned in the attack on the 7th of December 1941 by clambering along a rope suspended 70 feet above the harbor.

The thing that made this internment unique was that the divers, from the 7th Engineer Division, wore vintage World War II diving kit.

The dry suit and lead boots weigh in at around 200 pounds, and the Mark 5 diving helmet added considerably to the weight the divers had to manage before getting into the water.

This cumbersome kit is the same gear that was worn by hundreds of men as they conducted the salvage and recovery of bodies in the aftermath of the attack on Pearl Harbour. 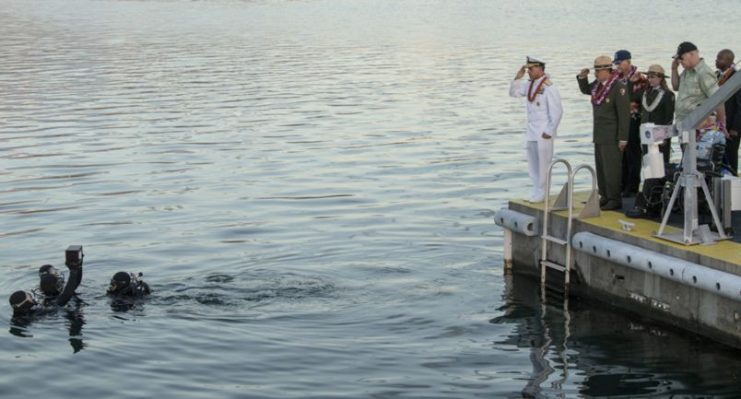 he easily recognizable copper helmet from the Mark 5 is perhaps the best-known component of the kit.

Four of the helmets in the military inventory were sent from Virginia so they could be tested and approved for use. Only two of the helmets were deemed safe for use.

Wearing all this kit, the two divers carefully made their way across the deck of the sunken USS Arizona until they reached gun turret number 4.

They then descended 22 feet into the turret until they could place the urn into a position where it would sink into the deepest part of the ship, where Lauren Bruner would once again join his old shipmates.

Only three of the crew members of the USS Arizona are still living. Still, as all have indicated that they would prefer to be buried with their families, it is unlikely that anyone else will ever be laid to rest similarly to Lauren Bruner.

This will probably be the last time, ashes are interred on this famous wreck, so there was added incentive to make it a unique and memorable occasion.

The honor of actually receiving the urn and placing it on the wreck was given to Spc. Julio Melendez, who is attached to the Army dive detachment that is based at Hickam Field.

The 21-year-old was left speechless when he was told that he had been selected to undertake the task of conveying the urn down to the wreck.

He said it was a kind of surreal moment thinking about the history that was being made as well as remembering Lauren Bruner and his service to his country.

The ceremony, held at sunset, was attended by more than 200 people, Lauren Bruner’s brother, 95-year-old Chet Danforth assisted by caretakers, handed the urn containing the ashes.

They handed the urn to a group of divers representing the Park Service, Army, and Navy who were in the water just off to the side of the memorial.

Then Melendez, accompanied by another Army diver, also wearing Mark 5 kit and one in modern, commercial gear, descended to the wreck.

They made their way over the deck until they came to the gaping hole that was once filled with number 4-gun-turret.

Taking the urn firmly in his hands, he carefully stepped over the lip, making sure not to snag his umbilical airline.

He followed a guide rope that shows the way to a 6-foot crack in the steel, 22 feet below the level of the deck. This is the place that is used for the internment of the urns.

The urn is carefully placed in the crack behind an I-beam, where it will fall into the depths of the ship.

Melendez was honored to have been chosen for this dive, though he said that the kit was bulky and pretty uncomfortable.

Another Article From Us: ‘Masters of the Air’ from Hanks & Spielberg Set in Norfolk Finally Happening

He also remarked that it was incredible to think that it was used until around 40 years ago.