The 17th June 1940 saw one of the most horrific events of World War II and the single worst maritime disaster in British history.

This was the date on which, the RMS Lancastria was sunk off the French port of Nantes, with an unknown loss of life. Estimates of the loss range between 3,000 and 5,800 fatalities.

The British Government has requisitioned the RMS Lancastria to assist with evacuation of troops from the European mainland.

On the 16th June, she anchored at the Loire River’s mouth about 5 miles south-west of St. Nazaire, in the company of around 30 other merchant vessels of every size and shape.

Early on the morning of the 17th June 1940 three Royal Navy Reserve officers came aboard and asked her captain, Rudolph Sharp, how many people the Lancastria would be able to uplift. The captain said that he would be able to take 3,000 at a pinch.

There is no reliable count of how many people were crammed onto the liner. Captain Sharp estimated he had loaded 5,500 people, but his officers put the count at nearer 7,200.

Around lunchtime, on the 17th, there was an air raid. Another liner, the SS Oronsay, was damaged, so Captain Sharp was advised to depart. There were no Royal Navy vessels available to protect her against submarine attack, so Captain Sharp decided to wait until the Oronsay could leave, along with the Royal Navy escort.

Late in the afternoon, the Germans launched another air raid. The RMS Lancastria was hit by three or four bombs dropped from a Junkers JU 88 bomber; 15 to 20 minutes later, she lay a the bottom of the sea.

Many lifeboats could not be launched as they had been damaged, and there were only 2,500 life jackets on board. 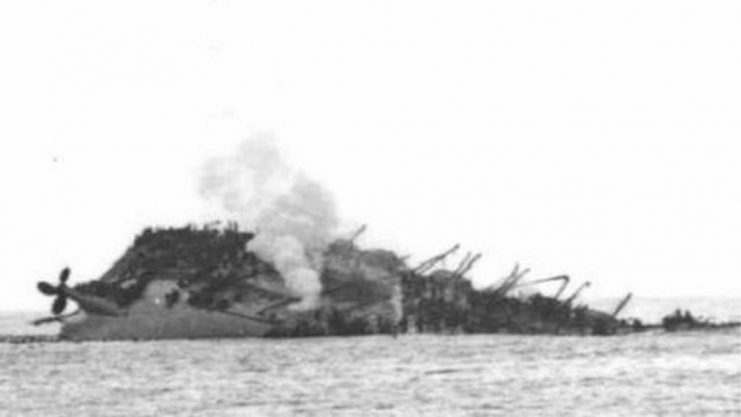 Many men jumped into the sea wearing life jackets and broke their necks when they hit the water, others were killed as they hit the hull of the ship. Many others died from hypothermia, inhaling fuel oil on the surface or drowning.

The speed at which the vessel sank meant that there was little time for other ships to react. Many other survivors were machine-gunned in the water by the German planes.

At the end of the day, some 2,477 survivors were picked up from the sea.

The people living in the area, found bodies washed up on the beaches for weeks after the disaster. A resident of Ile de Noirmoutier, Michel Adrien, who was six at the time, remembers the bodies spilling out from the sea, some still warm.

To this day, Adrien, aged 86, has no idea how many people perished, and it is unlikely that he ever will.

Winston Churchill issued a D-Notice on the day of the sinking of the RMS Lancastria. This shrouded details of the disaster in secrecy as Churchill wanted to cover up the grisly details of the loss of life from an already severely demoralized British public.

The D-Notice blacked-out details of the incident for 100 years, so it will not be released before 2040. The details that are known about the event have all come from witness statements.

A senior lecturer in British politics at the Sorbonne Nouvelle University in Paris, Thibaud Harrois, said that the German advances in 1940 “caught almost everyone by surprise” and led to the Battle of Dunkirk.

It is famously known that the battle ended with the enormous undertaking of evacuating the British troops from French soil. At the same time, many soldiers fought a fierce rear-guard.

Harrois went on to say that when history looks at the retreat in 1940, the evacuation of Dunkirk is the undertaking that most remember.

Officials at the time chose to ignore the Lancastria disaster, as it was deemed a ‘failed’ evacuation, and it was almost overshadowed by the news of the French surrender to the Germans.

Official notice of this disaster may not be forthcoming, but the descendants of those who died still honor the victims today and you can find some interesting history here www.lancastria.org.uk

This year the ceremony was considerably toned down due to the coronavirus pandemic. It was only attended by 10 people.