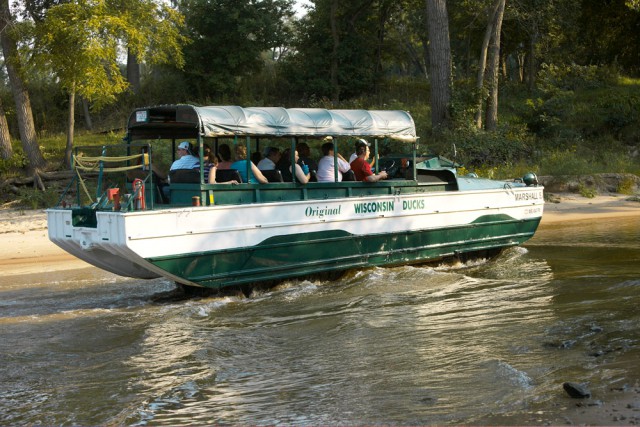 World War Two DUKWs or Ducks are still being used in the US state of Wisconsin to ferry tourists across the Wisconsin River.

The boats are known as ‘ducks’ since they are able to be driven on land as well as float in the water. They have been used for the past 70 years to carry visitors and tourists to Wisconsin up and down and across the river.

During World War Two, the ducks were used to carry soldiers through water and on into land. They were mostly used during coastal invasions when the Allies were attacking German-held territory.

More than 2000 of the ducks were used during the D-Day landings at Normandy to deliver thousands of troops in the surprise attack on German-occupied France.

It was two years after they were used in Europe that the ducks were sent back to the US. A war veteran, Bob Unger, thought that the ducks might be useful for other purposes and purchased the ducks which had been out up for public sale by the US military, The Journal Times reports.

Over a few years Bob was able to purchase around 40 ducks, but over the years has continued to gather them and now there are 90 servicing the Wisconsin River. Bob says that while most have come from the US, he has also purchased some of them from Italy from where he believes they might have been used in the attack on Sicily.

A company has been set up called the Original Wisconsin Ducks to manage and maintain the now huge fleet. The land and sea vehicles are able to travel up to around 50 mph on land and around 7 mph in the water.  They have a manual gear box and two clutches, so are not the easiest of vehicles to drive. Drivers need specific training which can take more than a month.

Sometimes the ducks are called back into official public service when the towns of Wisconsin have been devastated by flooding. They have also been used to commemorate their role in World War Two, with over 600 of their original drivers invited to visit the fleet of ducks for an anniversary memorial.