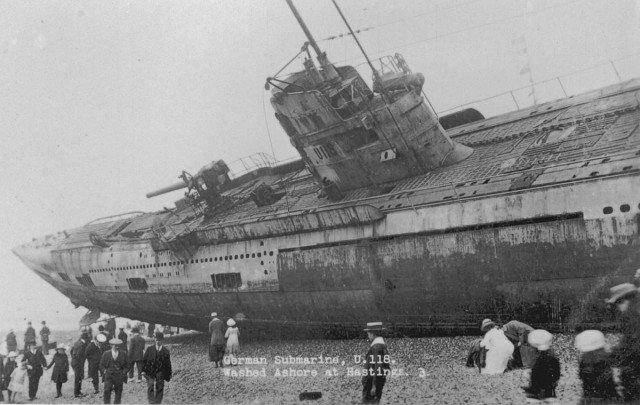 On April 16, 1919, the residents at Queens Hotel, a beach-front hotel in Hastings, on the Sussex coast in England, awoke to the most amazing sight.  No longer was there just a pebble beach and the waves rolling in, but also a most original beach ornament – a German U-Boat.

There firmly aground on the pebbles was the German U-boat SM U-118.  The Imperial German Navy was served by 329 U-boats during WW I and this one, commanded by Herbert Strohwasser, undertook only one patrol, sinking two ships before she was surrendered on February 23, 1919, as part of the general surrender of the Imperial Navy at the end of the war.  She had been constructed in the Vulcan Boatyards and was launched on January 23, 1918.

She displaced 1,164 tons when on the surface and 1,512 tons when submerged.  She measured 267 feet long and was 24.3 feet at her beam.  She carried two diesel motors which produced 1,200 hp on the surface, and underwater she was powered by two electric motors, together producing 600 hp.

At the end of the war, she was designated to be transferred to France to be cut up for scrap and was being towed through the English Channel towards Scapa Flow when she was caught in a storm, and the towing hawser snapped.  At 12:45 am, wind and waves deposited U-118 onto the beach in front of the Queens Hotel, bringing the war closer than any of the inhabitants would have liked. 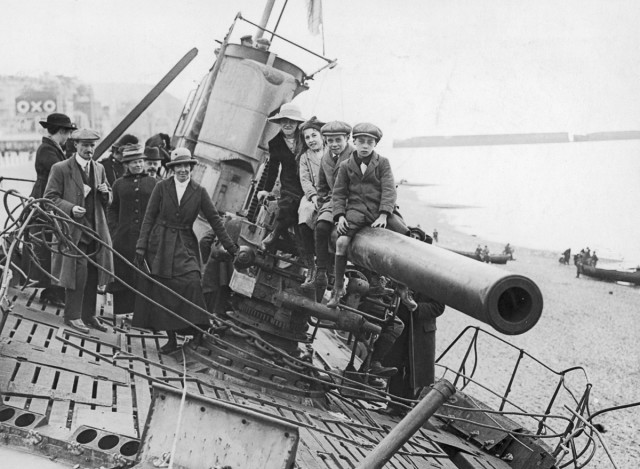 Once the inhabitants of this historic little town got over their shock, the U-boat became an instant tourist attraction, bringing in thousands of people from all over the country.  The Navy tried to refloat the submarine using three tractors, but this was not successful.

Then a French destroyer attempted to break it up by shelling it.  This was quickly stopped due the proximity of the hotel and other buildings in the town – perhaps the residents of Hastings thought the Normans intended to invade once more! 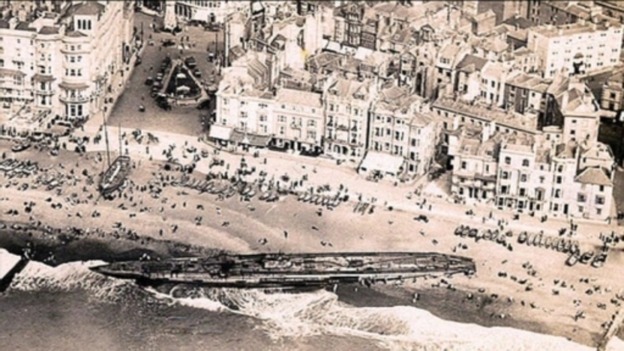 Not allowing a money-making opportunity to pass by, the town clerk started to charge a small fee for people to walk on the deck.  This money went towards the Mayor’s Fund, to be used later in the year to welcome home the troops.

Two enterprising members of the Coast Guard charged to take people inside the sub, but when the guardsmen fell ill this practice was stopped – they eventually died from inhaling poisonous chlorine gas that was being emitted by the batteries. 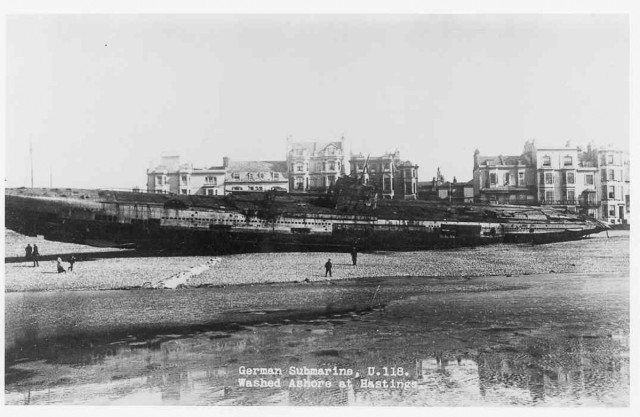 Soon the residents became fed up, as children took great delight in throwing pebbles at the hull – being practically empty, it made the most satisfying clanging sound.  They pressured the authorities to remove the hulk, and it was slowly cut up and removed piece by piece, with many a piece finding its way into local homes as souvenirs.

The ship’s gun was donated to the town and mounted, but it was eventually covered with shingle by wave action. When it reappeared in 1921, it was scrapped despite calls for it to be mounted as a permanent reminder of this momentous event. 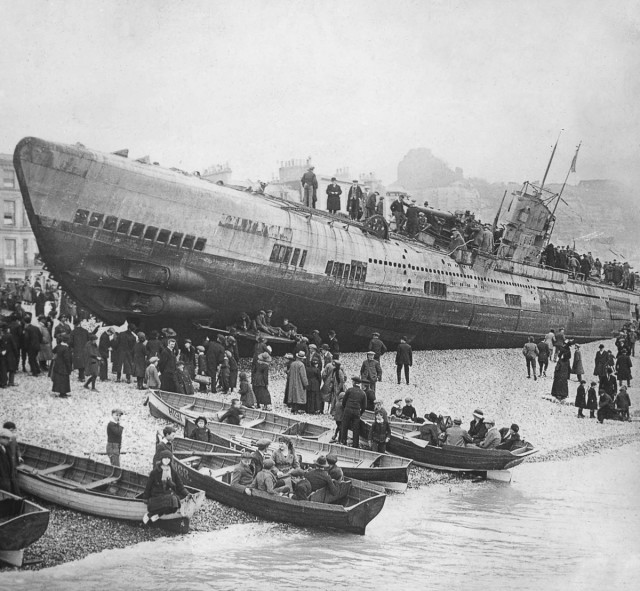 This purpose-built killing machine took part in trying to block English trade routes during WW I.  The Royal Navy was superior in size and capability, and could operate globally, which was not the case with the German navy.

So the U-boats fulfilled a pivotal role in preventing supplies, both food, and munitions, from reaching English shores.  The U-boats sank some 5,000 ships and killed a similar number of men during the First World War.

During the campaign, 217 U-Boats were lost to various causes, ending up on the bottom of the sea or, in this case, on the beach.