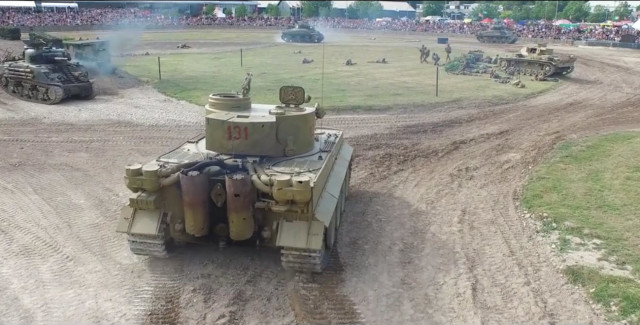 There is one thing you can count on during the Tank Museum’s annual Tank Fast, Tiger 131 will make it’s appearance. It will be showcased by itself and do a few laps around the track and it also features in the epic battle that ends tankfest each year.

Last year a drone was flown during the Battle Finale and it gives us a never before seen view of the the Tiger tank and the action. These guys know how to fly and how to turn the footage into a compelling story!

This year, Tankfest at The Tank Museum will be in the weekend of the 25th and 26th of June and this year the battle is all about the Tiger tank as the theme will be a famous battle in North Africa .

Tiger 131 stars in this recreation of a Second World War battle set in Tunisia in 1943, loosely based on the events that saw its capture.

Lead image is a still from the idp-film.com YouTube video.