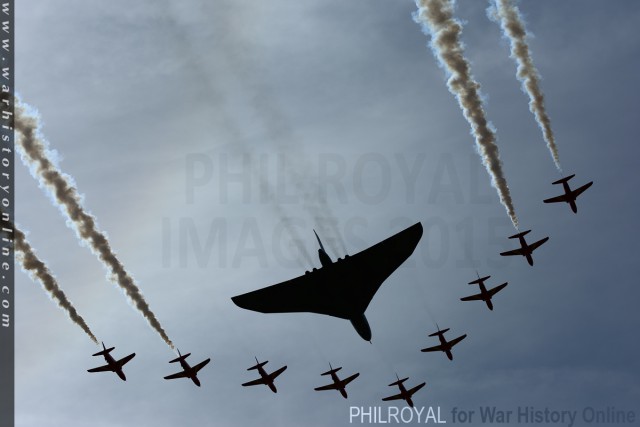 The nuclear warplane Vulcan was spotted by thousands on its farewell flight as it flew low over Northumberland, North Yorskhire, Tyneaide and several other counties in early October.

Martin Withers, a pilot with the most hours flying the 55 year old Vulcan, described the combat plane as a “force for peace”. According to Withers, “Its original function was to keep the peace and not really to drop bombs.”

During the Falklands War, Withers led an attack on the Stanley Airfields that became famous because it necessitated an exhausting 8,000 mile return trip. For this he was awarded the Distinguished Flying Cross. He also led another Vulcan attack against Port Stanley Airport when it was seized by the Argentinian Military.

Withers maintains that the aircraft was a force for peace despite the fact that the aircraft was initially built to carry nuclear weapons from Britain to the Soviet Union during the Cold War. “This is the whole thing about the nuclear deterrent, which I strongly believe in,” Withers explained, “It’s not there really to drop bombs, it was about developing something that is capable of doing it to make sure nobody does attack you.”

But the service life of the plane is now coming to a close; it was grounded on October 22 and will now serve as a “living museum”. But the retirement of the XH558 Vulcan has inspired a surprising amount of emotion, even from people who are not particularly aero-enthusiasts, the Chronicle Live reports.

The plane will now retire to its home at the Robin Hood Airport in Doncaster, where the public will have the opportunity to see it and appreciate its history with their own eyes, according to Richard Clarke, a trustee of the “Vulcan To The Sky Trust”.

“We want to let people have the ability to come and see the aircraft and get up close and personal to her – under the wings – and see what a fantastic engineering achievement she is and what a beautiful aircraft she is at first hand. We want her to remain a living aircraft.”