In 1944, Carpenter was promoted and assigned to combat duty with the 1st Bombardment Division in France. When he arrived, he was assigned to fly artillery support and surveillance missions with a Piper Cub light aircraft – an L-4H.

This assignment was supporting part of General George S. Patton’s U.S. Third Army. The Piper L-4H had a combined weight capacity of approximately 232 pounds, including cargo and passenger.

Of note, it should also be mentioned that there was no radio aboard. 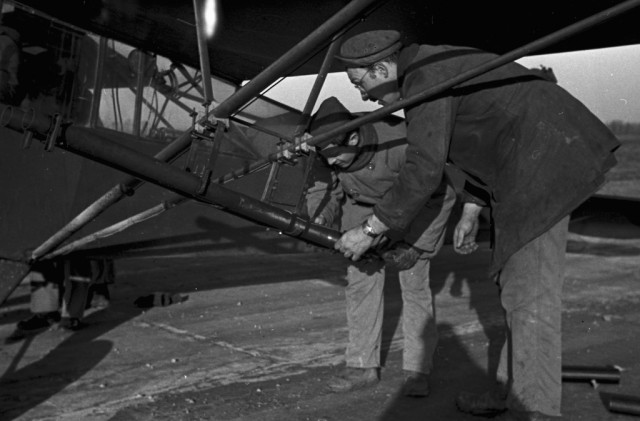 By the time of the Allied siege of Lorient and the encirclement of German forces around that city, Carpenter had become annoyed at not being able to attack Nazi forces during the occasions when Allied artillery was out of reach or assault aircraft were occupied in other combat missions.

Carpenter had noticed that other pilots had installed bazookas as armament on their planes as anti-tank fire. So with approval from Command Headquarters, Carpenter first attached two bazookas to the wings of his plane, which he called Rosie the Rocketer.

After some testing, Carpenter added two more rocket launchers, then later, two more for a total of six bazookas.

Carpenter’s bazookas each fired a single rocket-propelled anti-tank grenade with a battery ignited toggle switch operated by the pilot. The bazooka’s warhead could pierce approximately three inches (76 mm) of armor on impact when fired at a 30° flight angle, even though the rocket was highly ineffectual against the front armor of the German Tiger tanks.

Now with his aircraft armed, Carpenter began attacking German armored forces. With any firm hit against the thinner armor protecting the top of the tank, Carpenter found that even against the heavy tanks such as the Tiger I, using the bazookas as airborne weapons were quite effective at immobilizing the Nazi tank targets.

Most of Major Carpenter missions were flown alone because any additional weight had a negative impact on the plane’s maneuverability and speed.

When on the attack, Carpenter’s usual routine was to find his target while he was in the air, then corkscrew down before rapidly diving at the enemy tank or other target and releasing his bazooka grenades.

It wasn’t essential the enemy target be destroyed; as long as a tank was stopped from advancing any further. Within a short time, Carpenter was credited with immobilizing four Nazi tanks, two of which were Tiger 1 tanks, and knocking out a German armored car. Carpenter quickly became known as known as “The Mad Major” or “Bazooka Charlie” by his comrades in his unit.

His Carpenter’s heroic acts were soon recognized by several media accounts, including the Associated Press, the New York Sun, the Stars and Stripes, Liberty Magazine, and Popular Science. 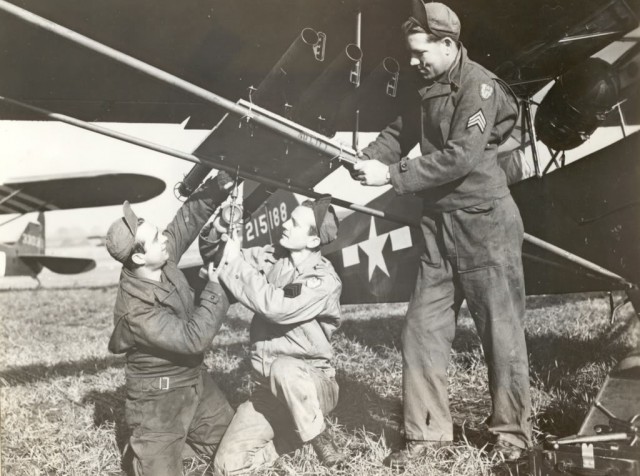 Major Carpenter was the private pilot for General John S. Wood, the commanding officer of the 4th Armored Division, in addition to flying his other surveillance and attack missions.

His duties as a personal pilot, allowed Carpenter to avoid most artillery observation missions. This was very fortunate for him because it allowed him the time to bestow his own private war on the Nazi armored corps.

Carpenter was also involved in some ground warfare. On one occasion, Carpenter was inspecting some prospective landing fields in a jeep near Avranches, when German infantrymen attacked his location. Jumping atop a Sherman tank, Carpenter started firing a .50-caliber machine gun, while shouting for the other troops to attack the Nazis.

Directed by the machine gun fire and the tank guns from the US Sherman tank, the Americans forced the Germans to retreat. Eventually, Carpenter’s Sherman came upon some Allied forces and accidentally shot at a Sherman bulldozer tank, blowing off the blade.

Carpenter was placed under arrest for the friendly fire incident and threatened with death by a firing squad until his commanding officer, General Wood, came to his support.

He was told he would be court-martialed for his actions. Suddenly, this decision was overturned by General Patton himself. Patton not only stopped the trial proceedings but awarded the major the Silver Star for bravery!

Patton said, that Carpenter was the type of American fighter he wanted in his army! 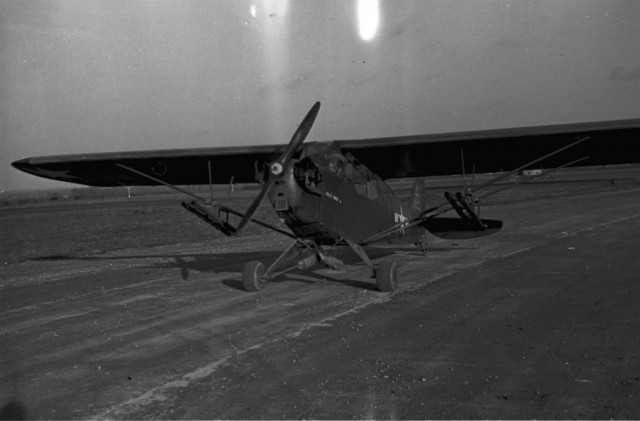 Initially, during Carpenter’s missions, he faced very little return ground fire. The Nazis were hesitant to fire on the light aircraft because they didn’t want to reveal their position, as doing so would draw fire from the Allied artillery or, worse, bring in the Allied fighter/bomber support.

However, as Carpenter’s bazooka attacks became more frequent and damaging, the Nazi return ground fire increased. Even the German infantry troops would fire at Carpenter with rifles and pistols trying to down “The Mad Major”.

On one occasion, Carpenter told a reporter from the Stars and Stripes that the enemy troops must have gotten the word to fire whatever they have at light aircraft with bazookas mounted on them.

Now, every time I’m on a mission they shoot whenever they see me. They never used to bother with me. The bazookas must be making them mad.

September 20, 1944, during the Battle of Arracourt near Nancy, France, was one of Carpenter’s longest missions. It began when the Nazi armored division forces launched a sudden tank attack pinning down several 4th Armored Division support units.

Major Carpenter boarded his armed L-4 and soared into the sky, but he couldn’t see the ground below because of heavy fog. He was beginning to worry; he couldn’t locate the enemy.

Around noon, the fog began to clear, and Carpenter spotted a company of Nazi Panther tanks and armored cars pressing forward to Arracourt. 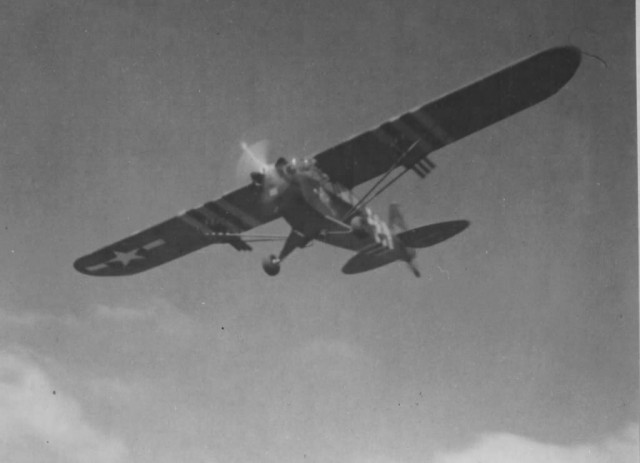 Diving through a barrage of German infantry fire during a continual sequence of assaults against the Nazi formation, Carpenter emptied all of his bazooka tubes. Carpenter returned to reload and flew two more missions that afternoon.

During this long mission, he fired at least sixteen bazooka rockets at the oncoming enemy. “Bazooka Charlie” was given credit for immobilizing two Panther tanks and several armored vehicles, while killing or wounding a dozen or more enemy troops.

The remainder of the German tank formation had to retreat because of Carpenter’s unnerving assaults to the enemy. These heroic attacks enabled a pinned down 4th Armored Division support crew, who had witnessed what Major Carpenter did that day, to escape capture and possibly death.

By the end of the war, Major Carpenter had destroyed several German armored cars and immobilized at least 14 Nazi tanks (he would be credited officially with two Tiger I tanks completely destroyed from a total six tanks destroyed) and had also participated in several ground combat actions.

Carpenter gained another nickname – because he never got as much as a scratch from enemy fire, he was also called, “The Lucky Major.”