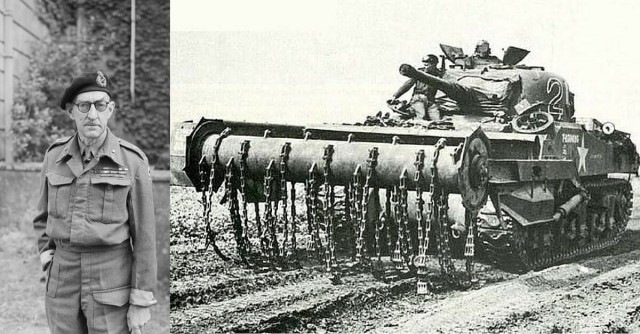 Chances are you’ve never heard of Percy Cleghorn Stanley Hobart, even though he just might be one of the most influential individuals in WW2.

Percy Hobart, who went by the nick-name “Hobo”, was a WW1 veteran and a graduate of the Royal Military Academy of England. In his early career he became fascinated with the developing subject of armored warfare and this led him down a path to become the Brigadier of Britain’s first armored brigade.

This experience quickly turned Hobart into a fervent advocate for the use of tanks on the battlefield. He began to campaign for funding and for recognition of the important role tanks would inevitably play in future military campaigns.

However, his progressive plans for armored warfare stepped on the toes of too many military officials who didn’t have the foresight to see beyond traditional Calvary warfare, and he made some powerful enemies.

Despite the disapproval of his higher military command, Hobart created a mobile armored division of the British military, which was located in Egypt and famously became known as the “Desert Rats”.

Despite his accomplishments, and with WW2 lurking just around the corner, Percy’s enemies saw their chance to get rid of him once and for all and he was ordered into retirement.

At the last moment someone came to Hobart’s defense – none other than Winston Churchill himself, who in a letter addressed to the war office stated: “We are now at war fighting for our lives, and we cannot afford to confine Army appointments to officers who have excited no hostile comments in their career.”

With Winston Churchill’s seal of approval stamped firmly on his head, Hobart was promoted to commander of the 79th (Experimental) Armoured Division of Royal Engineers. Now he was really in his element, tasked with developing new applications of armored warfare. Hobart let his creative genius run wild, cooking up all sorts of Frankenstein-ish hybrids to be used on the battlefield.

First came the “Armoured Flail Tank”, which had a web of rotating chains which worked in such a way that the tank could be driven into landscapes littered with buried grenades and clear a path for other units to proceed safely.

Hobart became known as the “Wizard Extraordinaire” and all his innovations became known as “Hobart’s Funnies”. He created tanks that could drive across rivers and link together to form a bridge. He attached cutters onto other tanks that could destroy entire areas of barbed wire and steel barriers. And Hobart created the blueprint of a design called the “Rhinoceros”, a tank with massive teeth that could smash apart huge swathes of hedge rows, The Spectrum reports.

We are quick to heap praise upon famous leaders like Churchill, Roosevelt, and Eisenhower for the WW2 victory of the Allies, but what we have to remember is that it was people like Percy Hobart, the unsung heroes working constantly and quietly behind the scenes, who really tipped the scales in the favor of the allies and won the war.