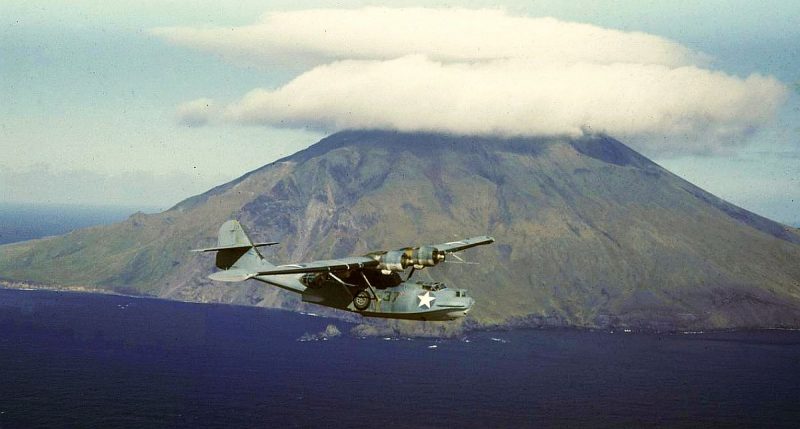 Right after the successful Japanese raid on Pearl Harbor/ Hawaii on Dec 7, 1941, many American citizens must have panicked over the next aggressive move from the Empire of the Sun. There were allegations that they soon would steam up with a huge fleet to invade California. That scenario seemed unrealistic as the surprise factor that worked wonder in Hawaii could hardly be repeated with twice that distance over open ocean. A more realistic option for the Japanese Military, eventually planning an attack on US territory, loomed in the North of the Pacific. There was that necklace like string of 69 islets that ran from the Northern Asian side of the vast ocean (nearing the Siberian island of Kamchatka) all the way East to the Southern Alaska peninsula or “panhandle”. The seaways around this island chain were patrolled by PBY-5A Catalinas, the C-47’s and a small fleet of ships, not really sufficient for covering the huge distances. 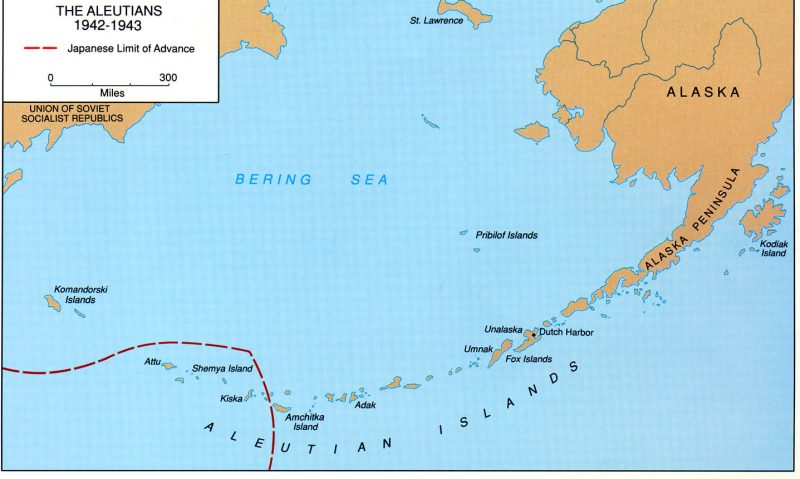 Map of the Aleutian Island chain with the tiny islands Attu and Kiska that were occupied US territory from June 1942 until summer 1943.

A forgotten war was fought there to liberate Attu.mericans quickly realized that this island chain could incorporate a very serious threat. Alaska was since years considered as the last remote frontier for which no enemy would ever have any interest to invade. Consequently, there were hardly any coastal defense works, infrastructure or telecommunications networks that could make a coordinated stand against a Japanese invasion fleet/ army , that would come in from the East with an island hopping domino strategy and superior armed forces. Worse, Alaska was since years the dumping ground for vintage army equipment, with arms, even helmets and fortifications that were left overs from WWI. Under manned, under defensed, with no existing supply lines to the sea harbors, the menace was bitterly felt by the end of 1941. 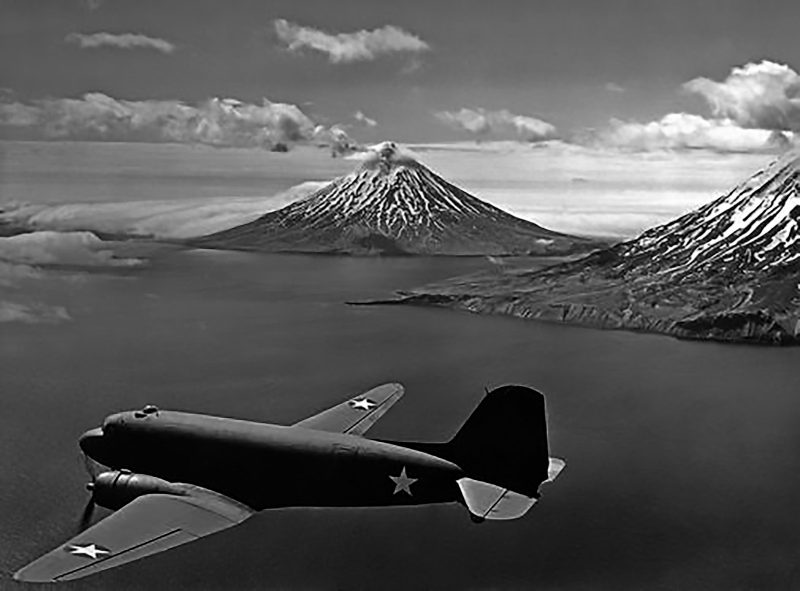 Magnificent photo of a C-47 overflying the barren inhospitable Aleutian Islands. No trees, 250 days per year snow, rain and fog en only 8 sunny days on average, welcome to Paradise.

The panic that followed brought some excellent ideas of how to defend the remote American soil, more than a thousand miles away from Seattle . One particular idea was brought to reality and you can still enjoy the fruits of that endeavor until today. It is the Alaska Highway nr 1, or in Military nomenclature the Alcan Highway or Alaska-Canada Highway. Here follows a miraculous story of how the North was won by road, not only by the settlers but in particular by the seven regiments of the US Army Corps of Engineers. That corps worked out a plan for the construction of a Highway that would run from Dawson Creek (British Columbia) all the way up North via Whitehorse (Yukon) to Delta Junction, less than 100 miles South of Fairbanks in central Alaska.

Total length of that immense project through an impenetrable wilderness of Pine forests, swamps and mud lakes was 2237 km, nearly 1400 miles. and was intended to bring Army supplies to Alaska at a rate of a 1000 tons per day with 1400 trucks of (on average) 1o tons each. What should have been transported with ease by shipping lines had to be done now with trucks over a huge distance with no road existing yet. The shipping harbors and boats available could hardly be defended against Japanese naval attacks, as most of the US Pacific Fleet was wiped out in the Hawaii Attack, or badly needed elsewhere in the ensuing sea war. 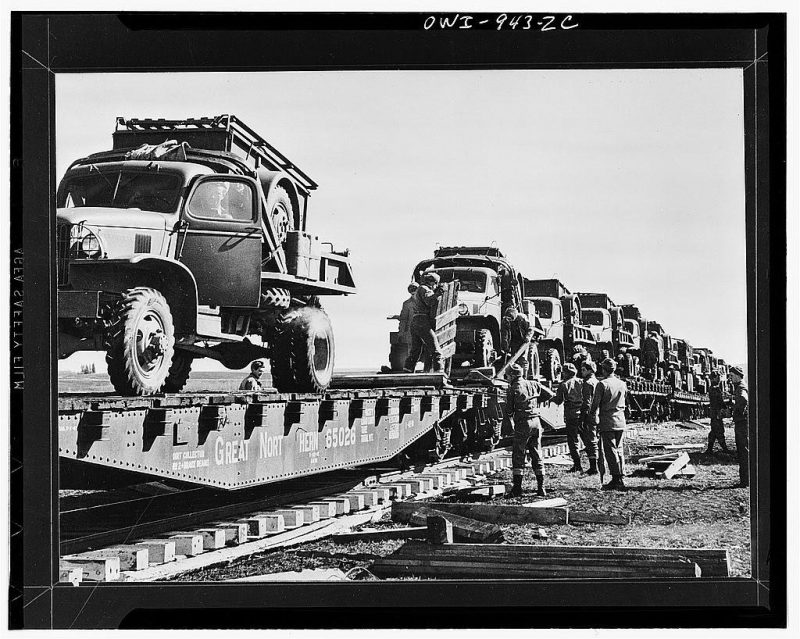 With the start of the construction of 1400 miles of road, to be finished in 8 months, a logistics nightmare had to be solved with thousands of trucks to be delivered by railroad.

In such nasty conditions, one of the greatest Army Corps of Engineers construction projects started on 9 March 1942, only 3 months after the attack on Pearl Harbor. With 10.000 soldiers and thousands of trucks, bulldozers, graders, steamrollers, cranes and shovels, they started the job in early springtime on 3 different locations, Whitehorse, Dawson Creek and Delta Junction

One of the early monster trucks , ordered by the US Army, for solving a major challenge of a constructing the Alaska Highway over impenetrable terrain, only accessible in summer time.

This immense effort was the only viable answer, while a few months earlier one could hardly have believed that the Japanese would ever make such audacious plan of an overseas attack on what was considered one of the mightiest Naval Forces in the World. But their success on Pearl Harbor may have worked as a drug, giving them a feeling of invincibility. Amazingly, as they must have realized that their raid, although successful, had only destroyed the Pacific US Battle ships as the USS Arizona. By miracle, the ships that really would matter and play a crucial role in the imminent sea battles had all escaped the carnage in Hawaii. Naval warfare was about to enter into the next level, in which “Reach to Strike” was no longer determined by the shooting range of Big Battleship cannons, but by the aircraft carriers that extended their deadly strike power to 500 km and more by launching at open sea torpedo and bomb carrying aircraft. 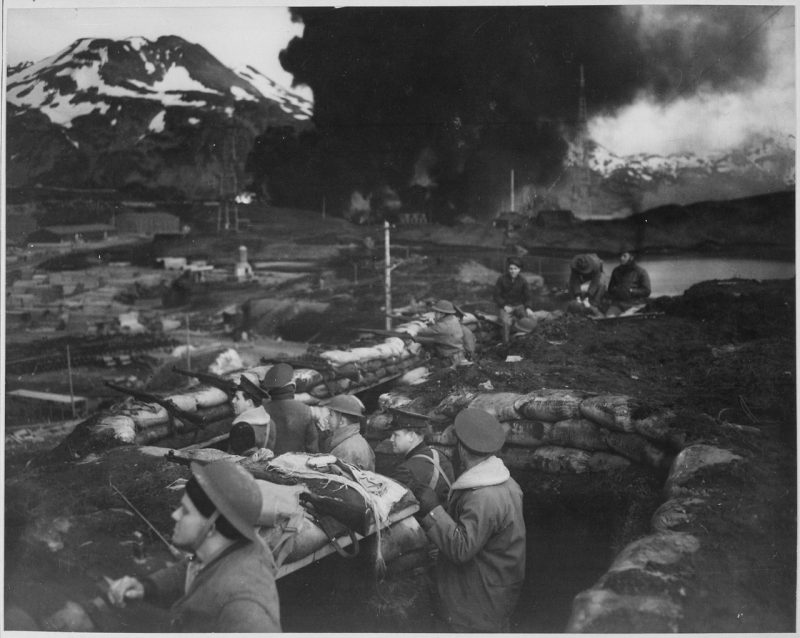 The 3/4 June 1942 raid on Dutch Harbor in view with burning port facilites in the backdrop. Note the guns, vintage helmets of WWI origin and open trenches that had to stop strafing Zeros.

Only 3 months after the road works had started, the worst scenario of Doom for Alaska seemed to become a reality. Early June, 1942, 7 months after Pearl Harbor, a Japanese invasion fleet occupied the undefended islands Attu and Kiska in the far western side of the Aleutian chain. This US territory, at only 1750 miles from Tokyo, was taken by surprise and all natives and a US weather station crew were taken prisoner. Before that, on June 3 1942, a fleet of two light Japanese aircraft carriers intruded much deeper to the East into US controlled sea and air space. They launched (at a distance of only 180 miles away) 34 aircraft that raided Dutch Harbor, on the Southernmost end of the Alaskan “panhandle”. That raid would take a brutal 2 days and made some 100 victims in town, plus moderate damage on the oil supply tanks, military barracks and port facilities. It soon turned out that this was a diversion attack, to cover up the Japanese invasion of the Midway Islands. After 2 days , the Japanese strike force that had attacked Alaska broke up and sailed back to Japan, as they got the bad news about the outcome of the Battle of Midway. In that battle, the Imperial Navy lost 4 of its big Aircraft Carriers, all of them veterans of the Pearl Harbor Attack. This loss could never be recouped again, it is considered as the American revenge for the infamy of Dec 7, 1941 and a pivotal point of the Pacific War. 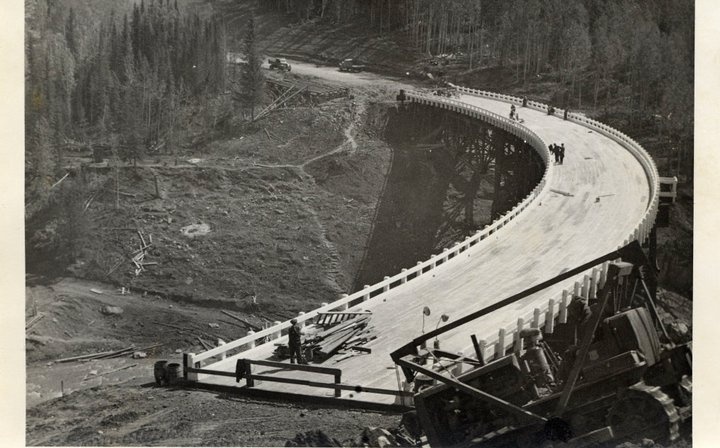 The Alaska Highway under construction , summer 1942, with a majestic curved wooden bridge.

Meanwhile, the works on the Alaska Highway carried on during the summer of 1942, until 25 October of that year, as the road was finished in its first primitive stage with basic bridges, gravel and sand. By 1943, the road works were continued for another summer to improve the accessibility of the road, also in wintertime as snow needed to be cleared.

The situation on the Pacific Naval War front turned soon into a disaster for the Imperial Japanese Fleet. That fact rendered any other plans for an invasion of Alaska totally unrealistic, as all hands were needed on deck in the South Pacific ( Solomon Islands, Guadalcanal, Aug 1942), to defend the flanks of the Japanese Emporium at its greatest extend. That development slowly started to dawn and would influence the efforts made on that what was 6 months earlier seen as the one and only “Road to safeguard Alaska”. The initial goal of 1000 tons of cargo to be transported per day did never materialize, in fact the road turned itself redundant as the war effort struggled on, pushing the Japanese Forces further back from Alaska. 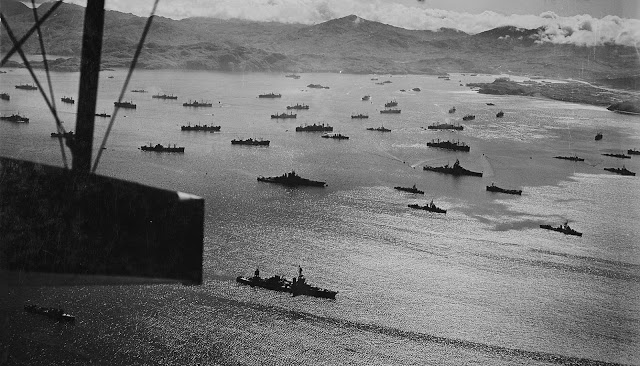 The US Navy in the Bay of Attu. It would take way more time and victims before the island was re conquered. A forgotten war from where no Japanese soldier would ever return home. 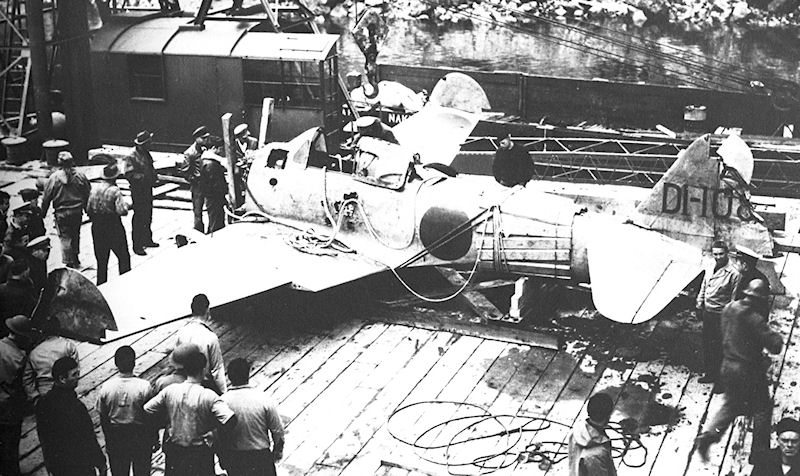 During the attack on Dutch Harbor, a Japanese Zero fighter made an emergency landing. The pilot got killed , leaving the aircraft almost intact for full examination and flight evaluation.

At the end of the Pacific War, the balance was made up. Alaska had come under attack, but it was a small scale raid executed by 2 light aircraft carriers and some 40 aircraft all together. Most likely designed primarily as a diversion raid for the Midway operations and testing the defense works, it may never have been a real target for the Japanese Army to occupy Anchorage or large parts of that vast and barren land. But that was all not known in Dec. 1941 and the decision to build that Alaska Highway of 1400 miles up north to Fairbanks was more than justified. The Army Corps of Engineers made here one of the great American road building projects in merely 8 months.

And today? I rode a greater part of that iconic Alaska Highway nr.1 on my trip to Whitehorse ( YT) and on to Tok and Fairbanks , AK. It was a magic ride, as I describe in my book The Dakota Hunter. I visited Alaska and the Yukon some years ago to go find the crashed C-47 in the Ruby Mountains, Yukon, near Haines Junction. The Kluane National Park, Haines Harbor and the surrounding lakes and mountains are of a scenic quality as rarely encountered. I have seen roads, mountains and lakes in my life, believe me, from Maui’s Hana Highway to the mysterious Macchu Picchu road in Peru, from the Cape Shore roads in SA to the Glacier Mountains in Montana, but this Alaska Highway and its environment are of a class on its own. 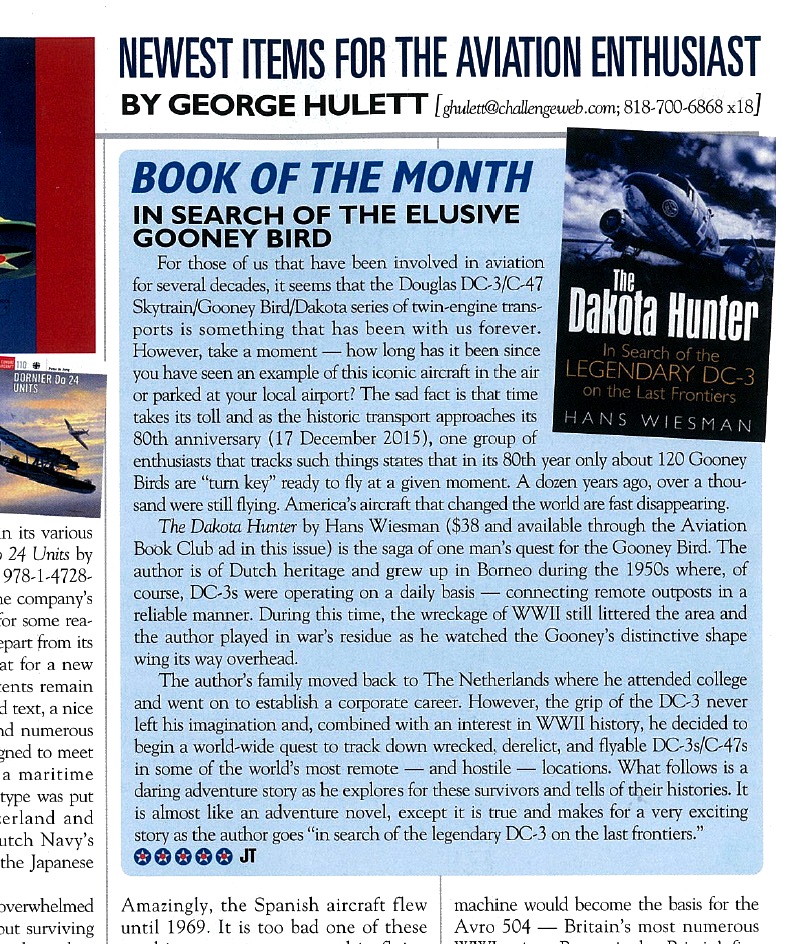 You should read my book The Dakota Hunter (320 pages, 250 photos) for all details that I describe in my search for the lost Douglas C-47/ Dakota on the last frontiers, it will amaze you! For a sneak preview, come to my website www.dc3dakotahunter.com and find out why this book has been selected by the leading US vintage Aviation AIR CLASSICS Magazine as their “Book of the Month”( Aug 2015). Read here below the AC review:”… What follows is a daring adventure story as he explores for the DC-3/ C-47 survivors and tells of their histories. It is almost like an adventure novel, except it is true and makes for a very exciting story…. ” Click on the button “Order the book” right on top and you can order the book right away at Amazon, Barnes & Noble, Bol.com etc.