The war in the Pacific was, for the first time, a war of Aircraft Carriers. They took over the leading role from the battleships which had been the queens of the sea for the previous centuries. For the first time, battles at sea were fought between fleets that were hundreds of miles from each other.

We have selected 22 images of the American side of the carrier war for you to enjoy, but also to show the sacrifice of those onboard the ships and planes that fought against the Japanese empire. 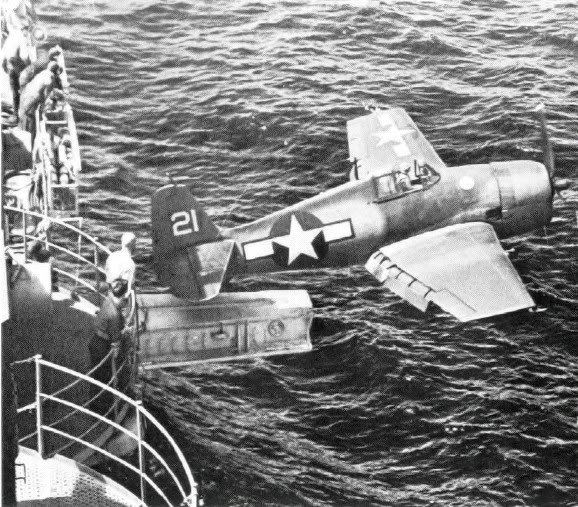 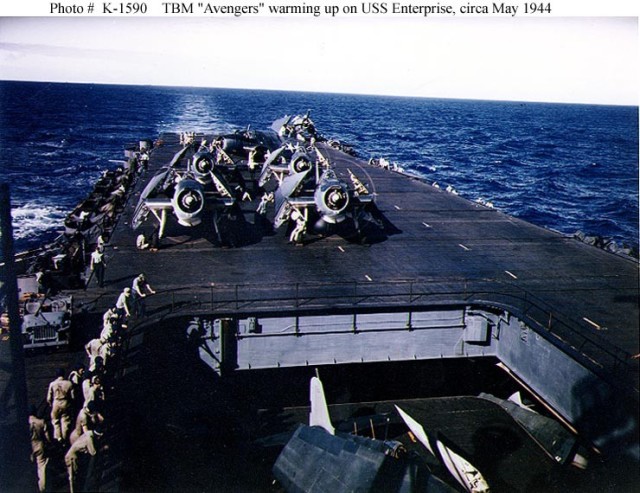 USS Enterprise (CV-6) TBM Avenger torpedo bombers warming up on the after flight deck during operations in the Pacific, circa May 1944. An F6F Hellcat fighter is on the midships elevator, in the foreground. The original Kodachrome color transparency was received by the Naval Photographic Science Laboratory on 29 May 1944. Official U.S. Navy Photograph, now in the collections of the National Archives. 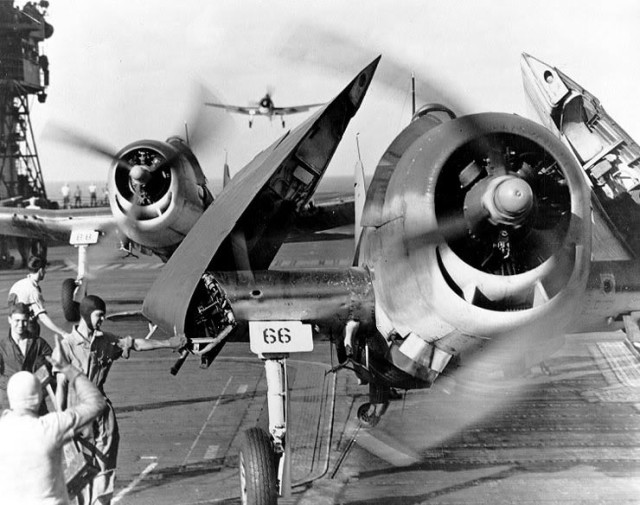 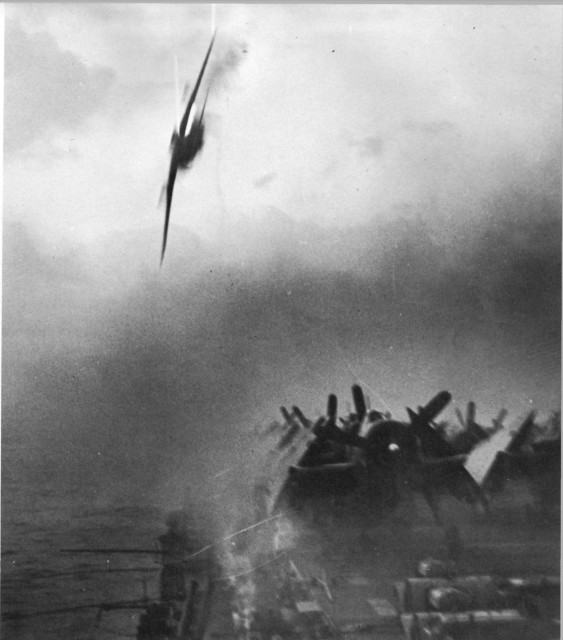 Japanese Kamikaze plunge that missed and crashed alongside the USS Sangamon (U. S. Navy Photo) 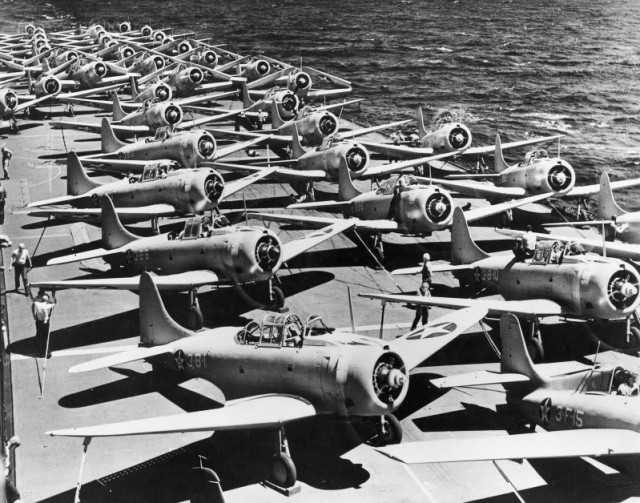 View of the commencement of a launch of the Saratoga Air Group on board the U.S. Navy aircraft carrier USS Saratoga (CV-3), 1941. The plane nearest to the camera is a Grumman F4F-3 Wildcat of fighting squadron VF-3 (3-F-15), followed by Douglas SBD-3 Dauntless of bombing squadron VB-3. Douglas TBD-1 Devastators are spotted on the aft part of the flight deck (wings folded), followed by SBD-3s, probably of scouting squadron VS-6. Note the overall light gray paint schemes with white lettering and numbering that was carried aboard naval aircraft for a short time during 1941. 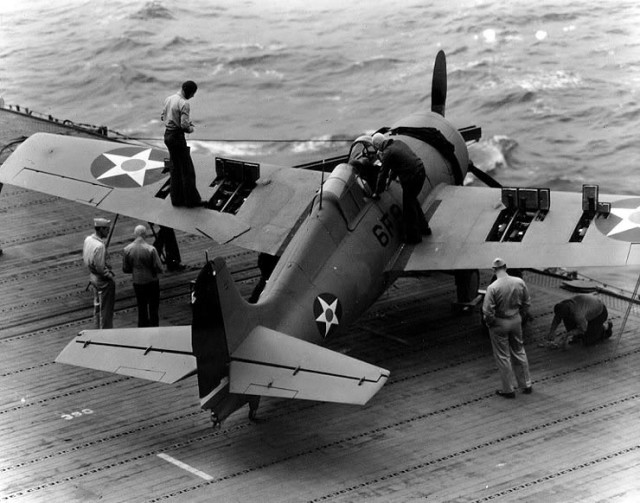 Grumman F4F-4 “Wildcat” fighter, of Fighting Squadron Six (VF-6) has its six .50 caliber machine guns tested on the flight deck of USS Enterprise (CV-6), 10 April 1942. Note open gun bays in the plane’s wings and markings below the cockpit (“6F9” with no dashes between letters and numerals) 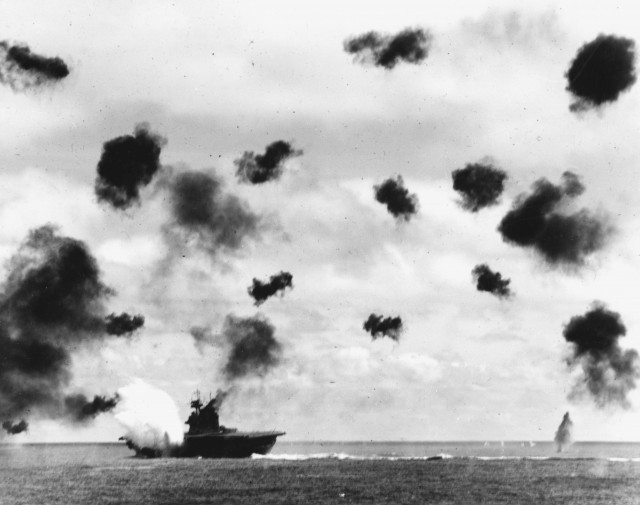 Yorktown at the moment of impact of a torpedo from a Nakajima B5N of Lieutenant Hashimoto’s 2nd chūtai. 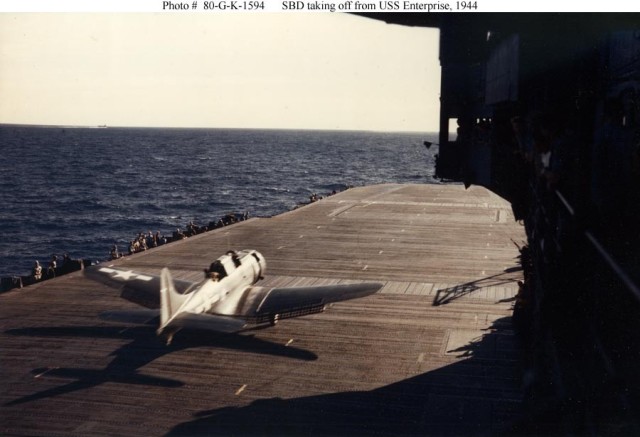 Douglas SBD Dauntless scout bomber Takes off from USS Enterprise (CV-6) during operations in the Pacific Ocean, circa early 1944. The original Kodachrome color transparency was received by the Naval Photographic Science Laboratory on 29 May 1944. Official U.S. Navy Photograph, now in the collections of the National Archives. 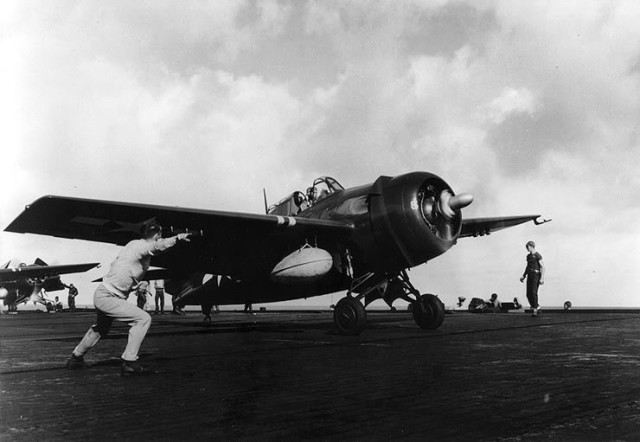 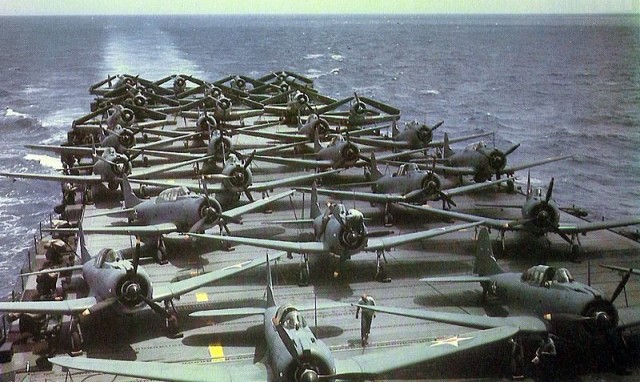 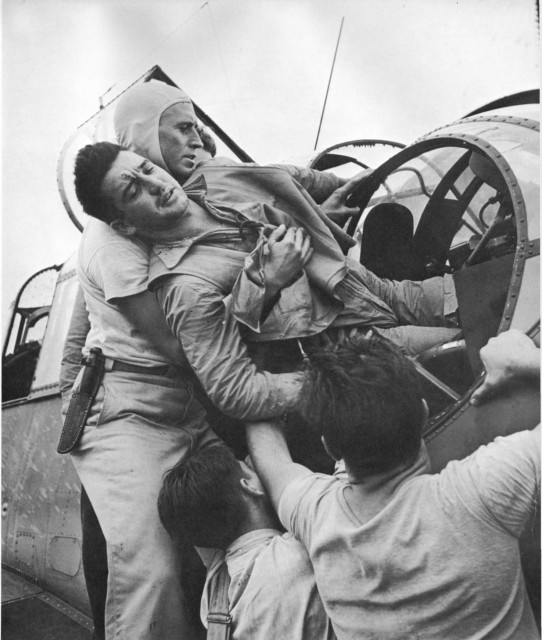 Aircrewman wounded in strike on Rabaul, on the Aircraft Carrier USS Saratoga, November 5 1943. 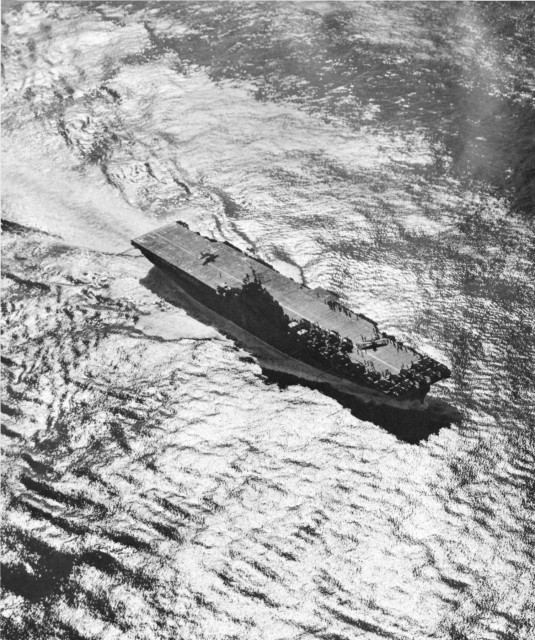 An aerial view shows the USS Yorktown landing her planes. Most of the footage for the motion picture The Fighting Lady was shot on the USS Yorktown. Photographed by Lt. Comdr. Charles Kerlee, USNR. U. S. Navy Photo 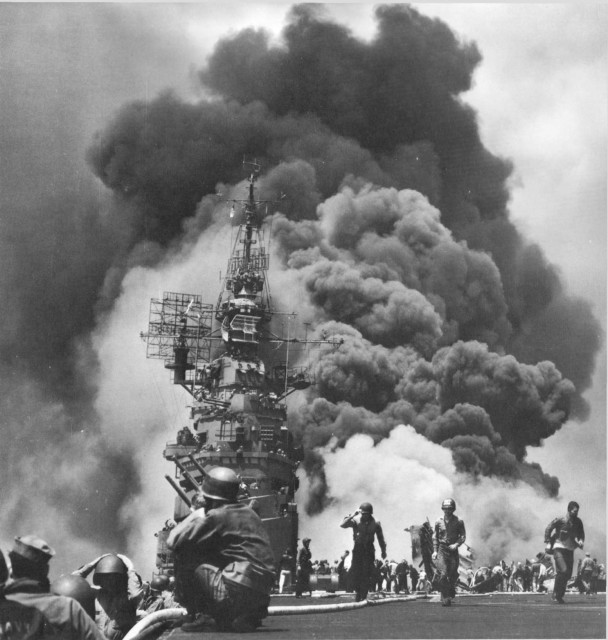 While operating with a fast carrier task force in the “slot” between Okinawa and Kyushu, these two suicide hits, acting as fuses to the gasoline-filled and bomb-laden planes, set the stage for one of the most heroic battles of the Pacific. Fighting suffocating flame and exploding rockets and bombs, the gallant crew, her heroes unnumbered, sacrificed 392 dead or missing and 264 wounded to save their ship. Photographed by a USS Bunker Hill photographer. U.S. Navy Photo 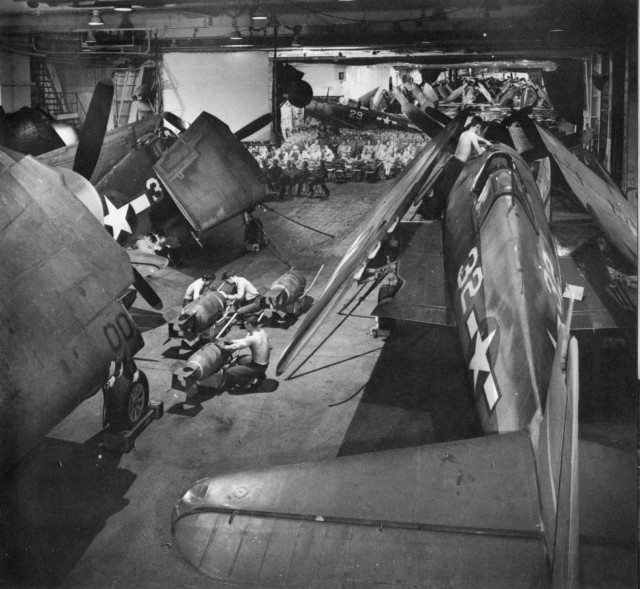 Ordnance men arming planes on the hangar deck of the USS Yorktown, while in the background men off duty are watching a movie. Photographed by Lt. Comdr. Charles Kerlee, USNR. U. S. Navy Photo 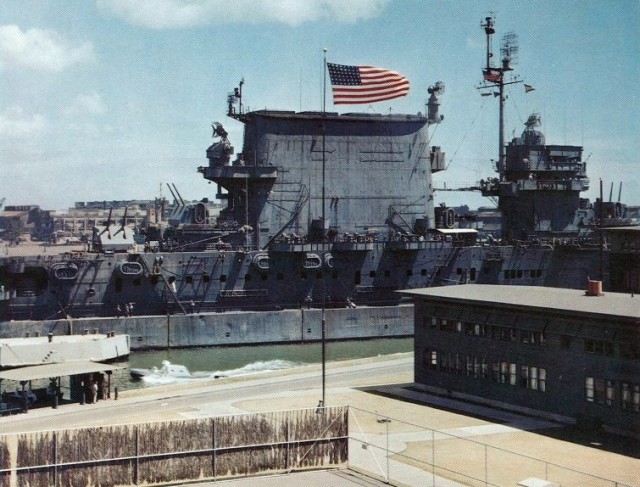 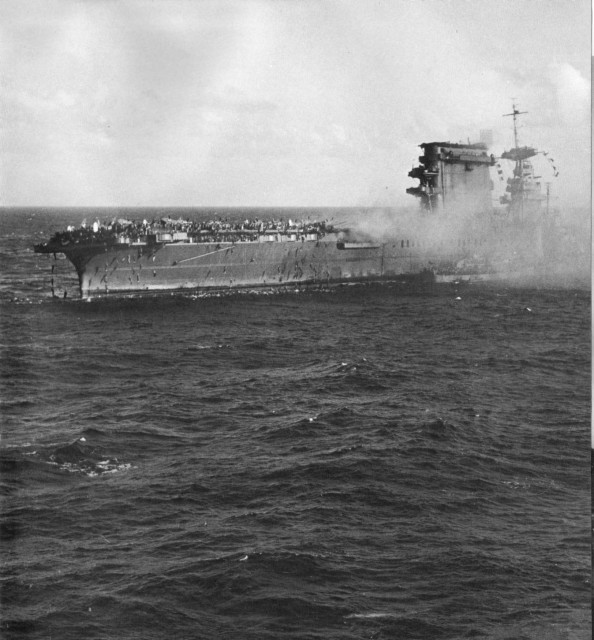 The old USS Lexington orders “abandon ship” – Coral Sea, May 1942. The destroyer alongside is taking off the sick and wounded while the able-bodied are sliding down ropes and being picked up by small boats. Not a man was lost in abandoning the ship. U. S. Navy Photo 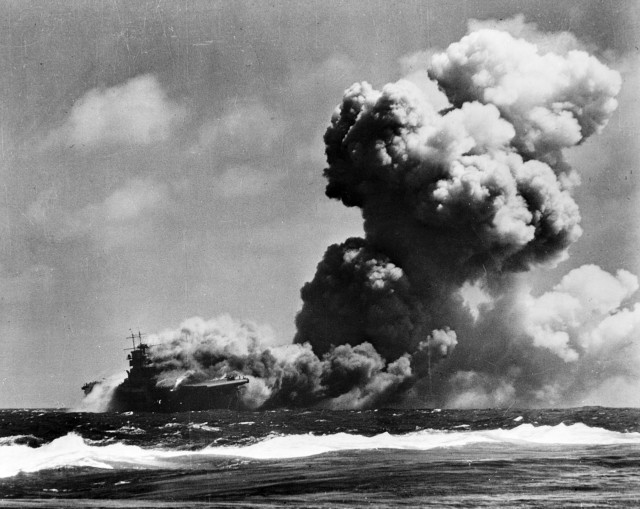 The U.S. aircraft carrier USS Wasp (CV-7) burning after receiving three torpedo hits from the Japanese submarine I-19 east of the Solomons, 15 September 1942. 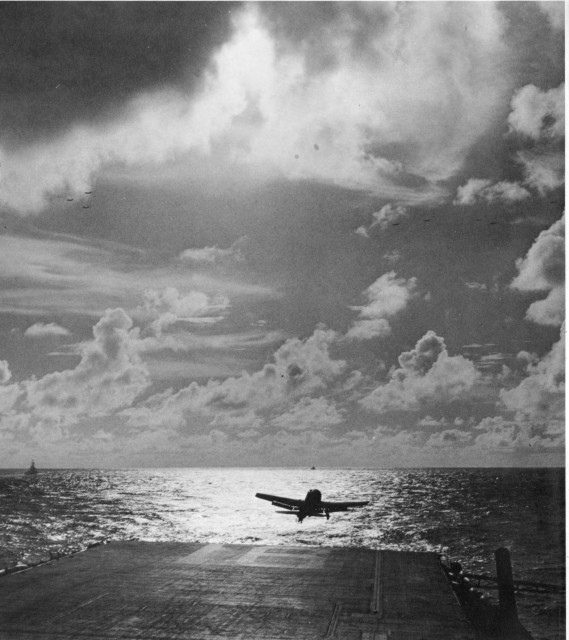 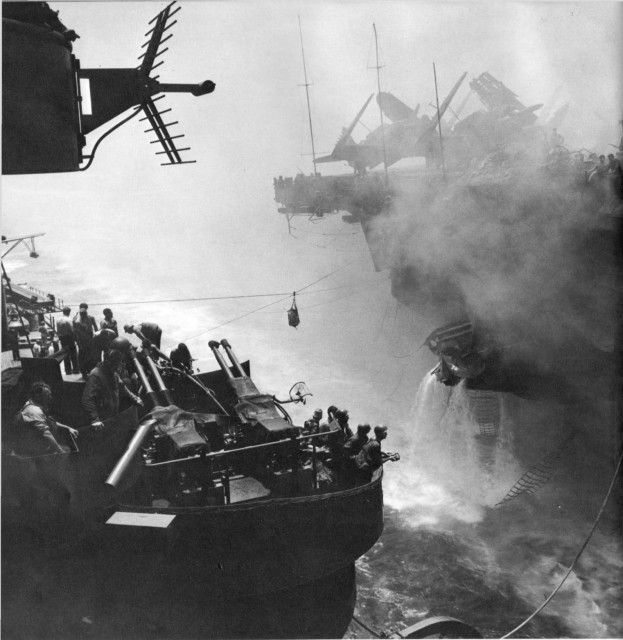 Transfer of wounded from the USS Bunker Hill to the USS Wilkes Barre, sick bays aboard carriers and battleships were actually medium-sized hospitals. U. S. Navy Photo 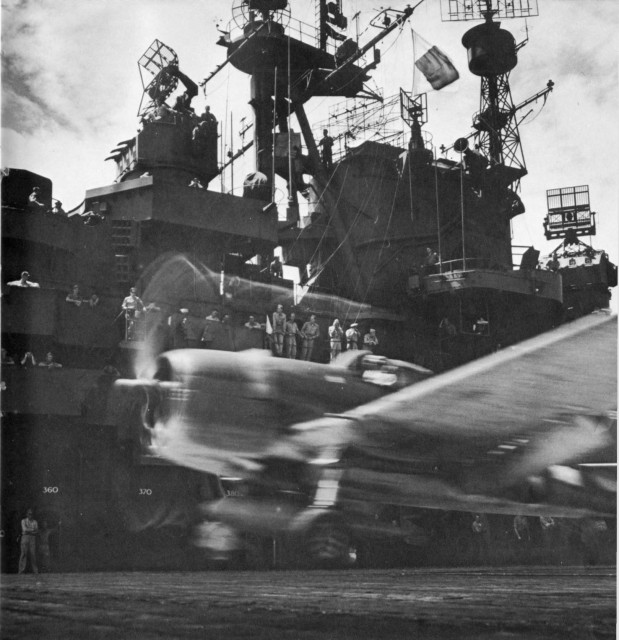 This photo taken aboard the USS Lexington was one of Capt. Steichen’s own. He had a special feeling for takeoff shots, contrasting action with a still background. Photographed by Capt. Edward Steichen. U. S. Navy Photo 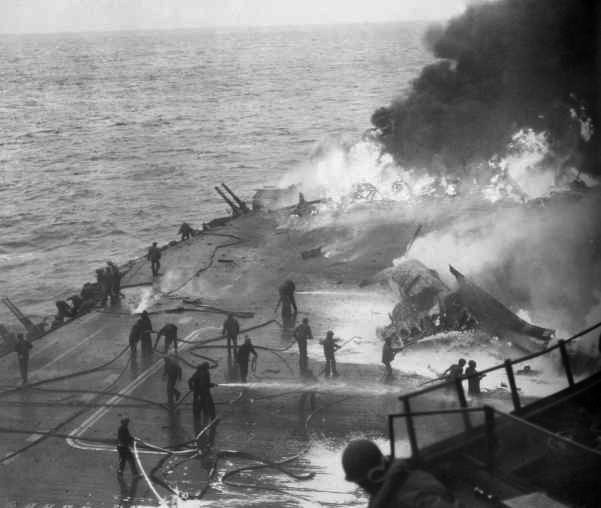 The U.S. Navy aircraft carrier USS Saratoga (CV-3) burning after five “Kamikaze” suicide planes hit the forward flight deck off Chi-chi Jima, shortly after 17:00h, 21 February 1945. Another attack at 19:00h scored an additional bomb hit. 123 of her crew were dead or missing as a result of the attacks. By 20:15h, the fires were under control, and the carrier was able to recover aircraft, but she was ordered to Eniwetok and then to the U.S. West Coast for repairs, arriving at the Puget Sound Naval Shipyard, Bremerton, Washington (USA), on 16 March. On 22 May,Saratoga departed Puget Sound fully repaired, and she resumed training pilots at Pearl Harbor on 3 June. 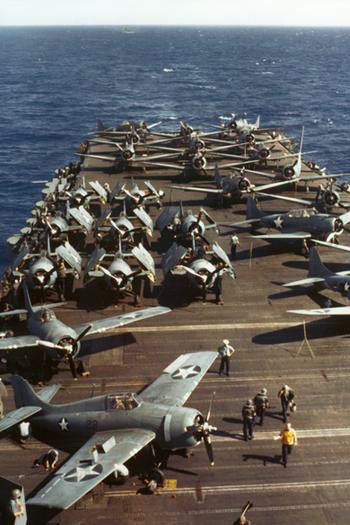