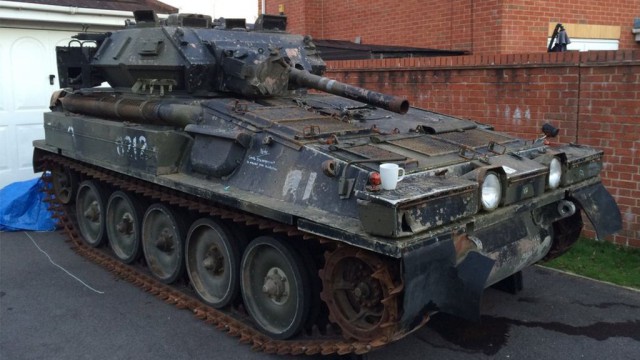 It wasn’t rent-seeking landlords or noisy neighbours that drove Jeff Woolmer out of his two-bedroom flat near Bristol. Mr. Woolmer had to move out because he found out that he had bought a seven-tonne tank!

He soon realised that “tank parking [was] a bit of a problem” at his flat and that he would have to move to a larger house in the outskirts of the city in search of a good parking spot.

Jeff Woolmer had bid on the ex-army tank on a specialist online auction site; then he had promptly put it out of his mind. Mr. Woolmer told the BBC, “I’d forgotten all about it and then at work I had a call saying ‘Hello sir you’ve just bought a tank’.”

That is how Mr. Woolmer, a stress engineer, ended up with a £9,000 tank and no place to put it. “I had a bid on one and then I had a phone call at work and of course everyone in the office was laughing at me,” he recalls.

Having moved into the new house, Mr. Woolmer has proudly displayed his tank on his driveway in Bradley Stoke. Amused neighbours have taken to calling him Tank Man!

When in operation, the CVRT Scorpion light tank can run at the speed of 50 miles, per hour. It also has a 50 millimetre cannon, but Mr. Woolmer assures that all the guns have been disarmed, the BBC News reports.

However, Mr. Woolmer does have a plan to make the tank operational again. “Once the batteries are charged we’ll see if the electrics come to life and then try and start it up,” he says.

Despite its large size, Mr. Woolmer believes that at seven tonnes, this military machine is just a “little baby tank” and that it “looks at home” on his new driveway.