Reminiscing about the first experiences with The Tank museum

I recall my very first visit to The Tank Museum in Bovington way back in 1982. I had just started basic training at the Junior Leaders Regiment Royal Armoured Corps, which at the time, for want of a better description, was somewhat akin to a military boarding school with the purpose of training the Non-Commissioned Tank Officers of the future.

Here as well as honing basic military skills, the emphasis was on learning to be a “Tankie”. It has now long since closed as part of the rationalisation of the British Army’s training bases. But I recall my two years there before becoming a “man” solider (aged 18) with a mix of fondness and absolute dread, in particular of the horrific Guardsman who spent his life screaming at us on the drill square and jailing us on a regular basis for having insufficiently shiny boots or looking at him in a “funny way”. 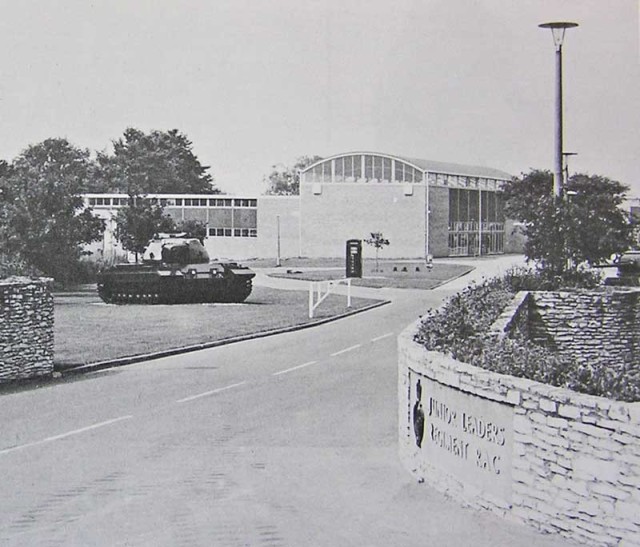 But anyway back to the museum. Opposite this marvellous training establishment was Bovington Tank Museum, which way back then consisted of a hangar and a rather nice lady who served a great cup of tea. We visited regularly to learn about these monsters of war that were to become the centre of our universe and at the time, unbeknown to us, we would one day go to war in.

A Very Brief History of Bovington

There had been a military training area at Bovington from the Boer war, when the equivalent of today’s British Territorial Army would come for training camps. At the beginning of WW1 the camp was used as an infantry recruit and training depot housing up to 12,000 men. After initial trialling and training of the “Tank” at Elveden in Suffolk in October 1916, Bovington was appointed as the new ‘home’ of the Heavy Branch Machine Gun Corps, the title of the first unit to use tanks.

After WW1, large numbers of British tanks were brought to Bovington to be broken up and sold on for scrap. Few believed there would be any further need for these oddities of war; it was after all, the “war to end all wars”. Twenty-six specimens, examples of each mark of current or experimental vehicle, were collected and moved into a small fenced compound. This was the beginning of the museum as we know today.

Space in this article prevents a more detailed look at the museum’s history (another time I hope) because it’s a fascinating story and includes a visit by Rudyard Kipling and the travesty when many irreplaceable relics, among them Mother, the experimental electric-driven tank, General Martel’s own home made tank, the Medium ‘C’ and many other unique machines, were melted down.

From then to now, the museum has undergone numerous transformations, grown and prospered. Today, it is home to in excess of over 300 exhibits and referred to as “The largest collection of armoured vehicles in the world”. The museum constantly changes, improves and in doing so brings a wealth of new historical education to all ages.

The Entrance to the Museum

On 26th March, the Museum opened yet another new exhibition which I was lucky enough to be invited to, entitled the “Tank Factory”. This time, the emphasis was not so much on the vehicles but telling the story from 1916 to the present day about the men and women who built these ground-breaking machines of war and how the demands of factory life affected the workforce and society in general. 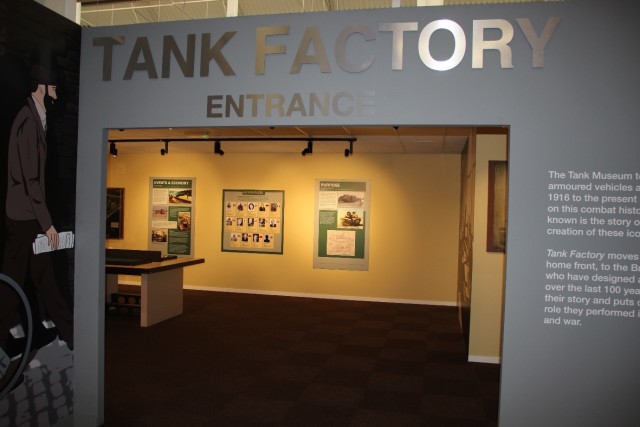 The centrepiece of the exhibition is a production line of Centurion tanks, a tank widely known as one of the most successful British Tanks ever made.

The first Centurion known as the A41 was led by the design team known as the Department of Tank Design. Their brief was, first and foremost, to design a vehicle that was reliable with “maximum efficiency under all conditions of terrain, temperature and sustained action”. Although the Centurion had numerous modifications throughout its life the basic design remained, making it the most long-lived Tank in British Service history.

HRH, the Duke of Kent, is a patron of the museum. He, with the help of Mavis Jones (who was a factory worker during the Second World War), officially opened the exhibition. Mavis was inspiring and her story is featured in the exhibition. Mavis joined Newton Chambers in Sheffield, a tank factory, at the age of 16 as a tracer in the drawing office. She met her husband, Lieutenant Eddie Jones while he was training nearby for D-Day and they were engaged within three weeks. 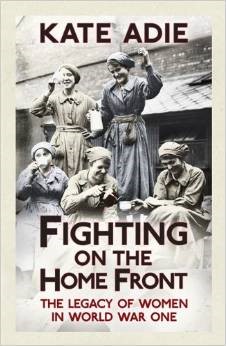 Katie Adie – The former chief news correspondent for BBC news and author was also present, she said “They were ordinary people involved and it has to be said that, at least in the First World War, most of the population were in some way involved in the war effort. It’s important to remember that everybody did their bit.” “One of the things that struck me when I was writing a book was the not very well known story about the women who built tanks, especially up at the first factory in the major production area of Lincoln. Women were pretty well the dominant workforce in the factory and people don’t associate women with making tanks.”

David Willey, curator of the Tank Museum, said: “We hope this exhibition brings a new story and perspective into the museum displays. It shows how such amazing machines are designed and made, and of course tells the story of the people who put them together, often with great pride and satisfaction in their work.”

The exhibition also showcases what the museum describes as an‘impressive’ line-up of vehicles and will cover a wide range of topics including materials, armour, weapons and testing”

The “Tank Factory” also covers issues such as who builds tanks, why they look the way they do and what makes a tank good or bad. Visitors will also be able to design their own armoured vehicle through the use of an interactive touchscreen.

This latest exhibition is just another example of why this museum remains at the top of its game. The museum’s appeal to all ages is clear, it’s never stagnant, it’s interactive, and most of all, it’s educational. From my first visit all those years ago to now working closely with the museum in many areas, I have the upmost respect and admiration for the Director and staff here.

It must be said however, that I do feel really old now, as pointed out to me recently there are now in the region of six vehicles in the museum display that I have actually served on!