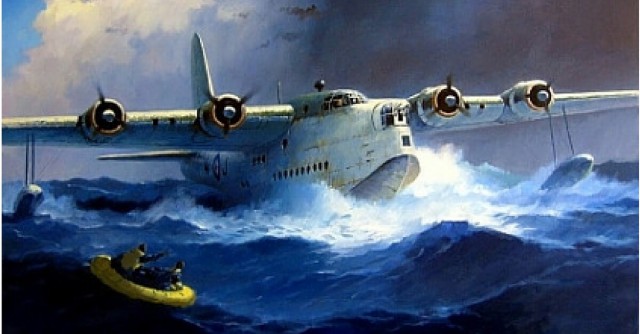 Dramatic picture of an open sea rescue of a downed air crew by a RAF Short Sunderland in high swell conditions (courtesy hdwpics.com). After the war, the type was converted to a passenger transport as the Sandringham and flew for Quantas,  Ansett and Antilles Air Boats for many more years, but with the arrival of the Jet and Turbo-prop aircraft, the appearance of the large Flying Boat was to become a rare sight in the 1960’s. 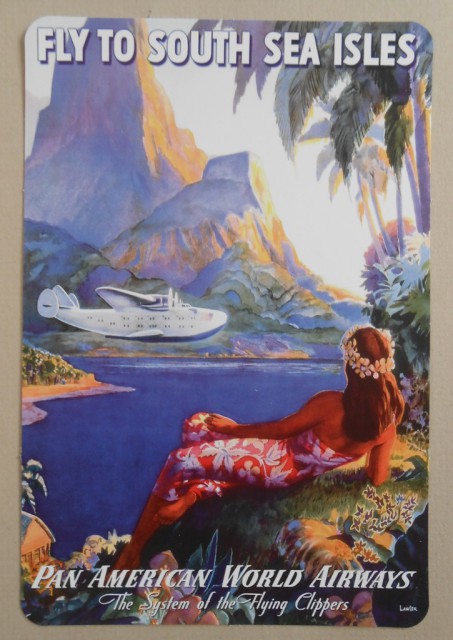 The most romantic of all Airline posters of the past, this one hangs on my wall.  It is the near melancholic atmosphere of a blue lagoon in the Pacific, dominated by a huge rock formation in the backdrop and an “Aloha” girl in the front. The pastel colors of flowers, sea, shore and palm trees create a dream away world  that you can enter only so directly with a Flying Boat ( Boeing B-314 depicted). What a relief without all the hassles of an international airport with thousands of tourists trying to do the same as what you try to do, relax in a quiet, serene environment as this one. The obvious small scale operation of a single flying boat lacking the mega infrastructure of International Airports is what drove me to organize a Catalina Odyssey World Tour in the mid 1990’s . For more information about that tour, see the last photo of this post and my book “The Dakota Hunter”.

The Golden Age of the Trans Continental Seaplanes had a small slot in history, it existed only during a limited time span of roughly 20 year between the  mid 1930’s and the mid  1950’s.  I was the fortunate son of a Dutch oil explorer, who went for Shell to the Indonesian island of Borneo in the early 1950’s. The oil company owned a couple of PBY-5A Catalina’s that flew my dad and his family deep into the Borneo Jungle, where we landed on the river Mahakam near Samarinda for a stay of some years in a remote oil-drilling settlement. The adventures of my most exciting kid years are described in my book  “The Dakota Hunter”, published by Casemate USA/ UK  in May 2015. Those were the final years of the “Belle Epoque” in which Flying Boats and Amphibians could survive, due to their ability to land on seas or rivers near islands and remote lakes and bays where airfields with asphalted runways were non existing. But the war had brought all over the globe new airfields for accommodating the huge long distance bombers as the Boeing Superfortress B-29. The days of the Flying Boats were numbered after WW II  and even for the Amphibian there was no bright future, considering the inherent higher risks of a water landing that always required more pilot skills, particularly  in high swell and choppy waters, when there was no option to divert in case of adverse weather.

The romance of the Seaplane flight has remained a very strong sentimental souvenir for me, as it is for so many others who have traveled or worked with those aircraft. Below you will find a collection of fine posters of that Golden Age of the Flying Boats.  You will notice the unmistakably romantic pitch of the posters depicted, they were made to seduce the first intercontinental tourists to become airline passengers and  step away from the Cruiser steamboats travels  that until the mid 1930’s were the  only means of transport to get from USA to Hawaii and beyond. Enjoy the posters and photos. 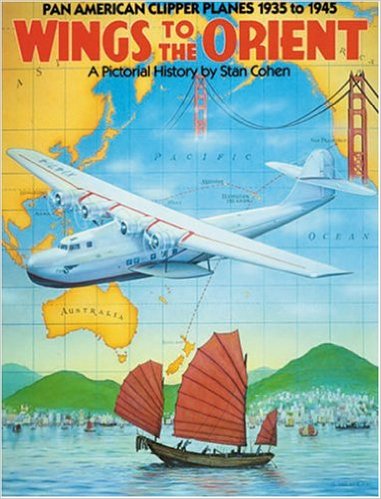 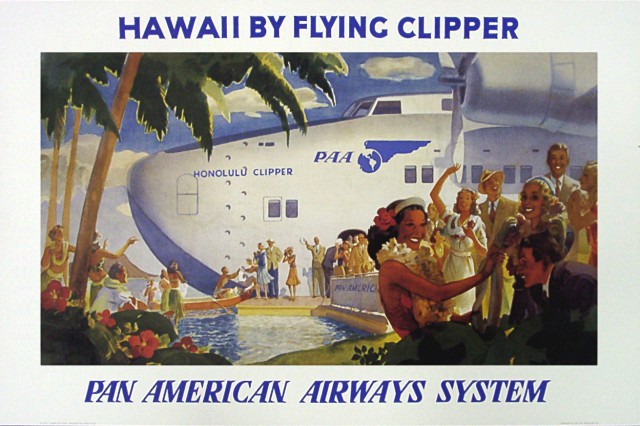 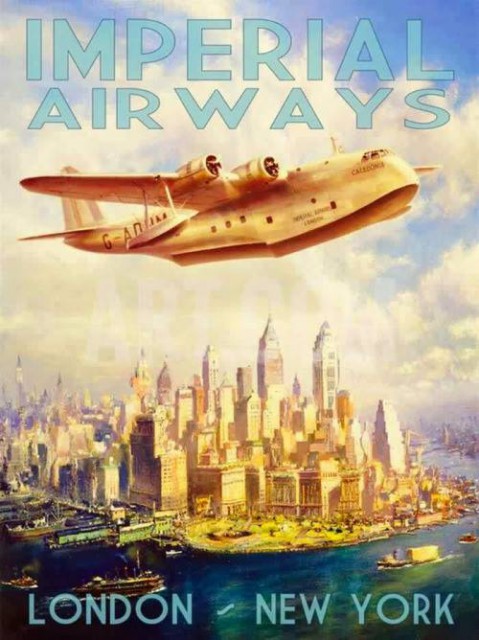 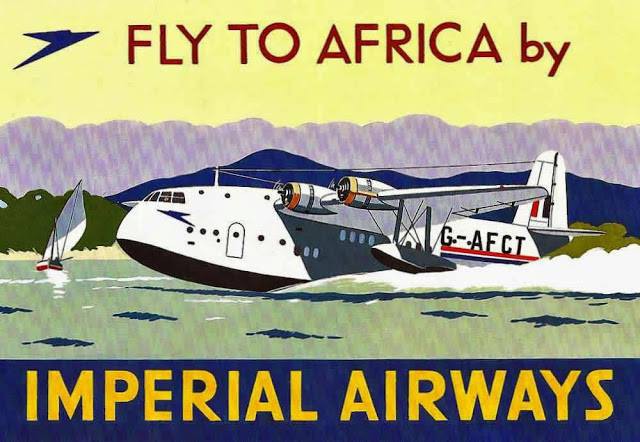 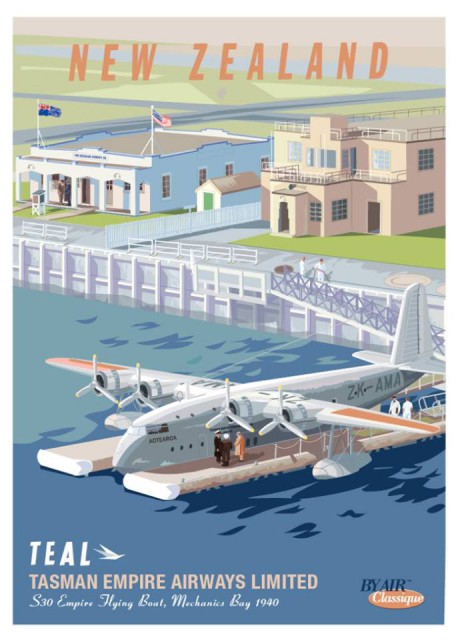 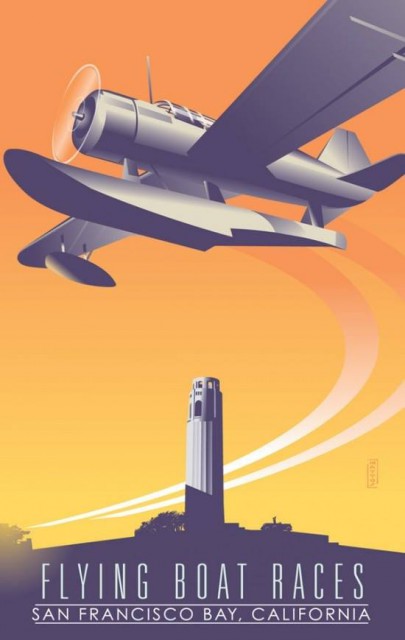 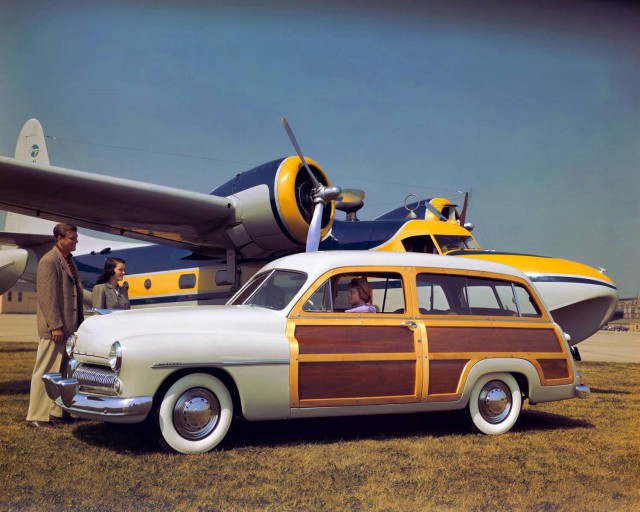 Photo above shows an immaculate Mercury Woody Wagon 1951 with Grumman G-73 Mallard in the backdrop with radial engines.  What a wonderful combo is this! I never rode the car, but flew the Mallard many times in the 1990’s with Chalk’s Ocean Airways from Miami Cruise Port to the idyllic island of Bimini, where we landed in the lagoon. The Mallard taxied in the crystal clear water, brought its landing gear down and pulled up the ramp at the end of Main street ( aka Queens Highway) in Alicetown.

We took a drink (or two) at the “End of the World” Bar in town and stayed for a couple of days to do spearfishing and wreck diving, The flight was one of the world’s  last existing scheduled passenger air transports with a water take-off & landing. This marvelous and affordable experience came to a sudden end as a Turbine G-73 T Mallard ( built 1947) of Flight 101 crashed just after the take off from the Cruise Port on December 19, 2005.

The tragic accident took the lives of all 20 passengers on board, attributed to metal fatigue and poor repairs/ maintenance of the starboard wing, which folded during the climb out just off Miami beach. It was the abrupt and sad end of one of the World’s last seaplane airlines. 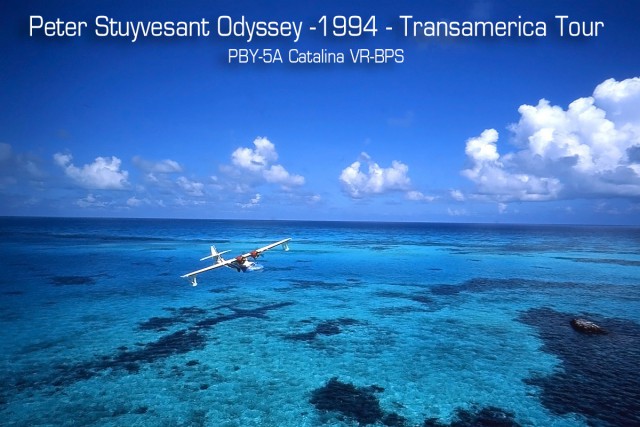 The photo above was taken during my second Catalina Odyssey World Tour, organised in summer 1994. The tour was covered by 3 TV Channels from Holland, Belgium and France. We flew with the Plane Sailing Catalina VR-BPS with stronger engines ( R-2600’s).  Captain Paul Warren Wilson was our captain during the 6 weeks American tour with a double transatlantic crossing. There are a lot more photos and links in the complete blog, that you can read on my website. See Blog Seaplane Posters & Photos by The Dakota hunter

Please visit www.dc3dakotahunter.com for all that extra information and how to order my book.