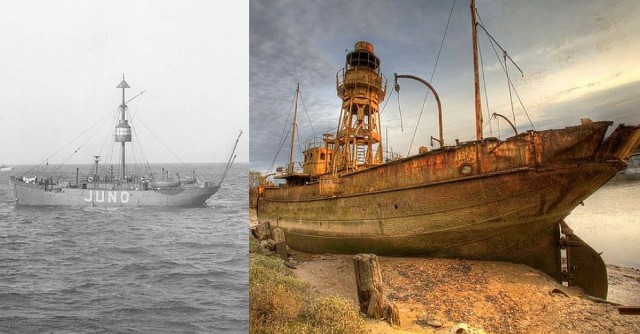 During 2015 we saw the world remember the events of seventy years earlier and the end of World War 2, each passing day we lose more of the brave few that fought for freedom during that time, we remember all those who laid down their life and made the greatest sacrifice, and as a country we all hold In high esteem all of those surviving veterans who served.

There is one grand old lady who now at 112 years old, never really received the recognition she earned and is almost forgotten, after already spending her working life as a beacon of light to all of those around her, at the age of 41 she answered the call to serve her country when in June 1944 along with her small band of sisters they set sail and crossed the treacherous waters to France, where they were stationed of the coast of Normandy.

Her task was to guide the countless troops, equipment and supplies through the watery minefields and onto the beaches on their way into occupied Europe. For months she weathered all that the English Chanel could throw at her. I’m sure many of those that saw her gave her a nod and a wave as she showed them the way.
A little battered and bruised she finally returned home to Blighty, like many others who had survived active service during the war she went back to her old job, again she worked hard, with a few little hiccups during her career she finally retired at the age of 69, though not quite ready to join the scrap heap she tried new ventures, finally she settled down at her new home with a river view.

As world swept past and changed around her the years went by, she has lost count of the ebb and flow of each tide, time hasn’t been kind to her and with each passing day she just manages to keep her head above water albeit she now has a bit of a soggy bottom, but she dreams to shine brightly once more, before the ravages of time can take its final toll.

You may ask who is this lady, well she is LV72, her name during World War 2 was JUNO, she was a Light Vessel of Trinity House, along with her crew they bravely went to War, however now rusting away she lays on a mud bank on the River Neath in South Wales, after saving so many lives, she desperately now needs help from the Nation she proudly once served for 69 years