You might think that you know about all the unique military weapons that have been made to date, but human beings have a penchant for devising ever newer ways to kill and destroy. Here, we will take a look at 7 weapons that will literally blow your mind away and will make you question why they were made in the first place. Let’s have a look:

During the early times, it seemed that helicopters would just remain an idea, or a doodle on the paper. History is witness to the fact that there have been people like Leonardo Da Vinci who had a very clear idea about how the helicopter would look. Everything was on paper, but there was one issue and that was how you would control the whole thing. During the very first attempts, one of the problems that was faced was that helicopter would only spin along the blades.

The Germans were finally successful in making a helicopter that actually flew from one point to the other with the help of propellers. For some reason, Adolf Hitler thought that the whole structure was not advanced enough and decided to spruce up helicopters by adding ramjet engines to them. The basic idea was not to overcome steering issues, but it was thought that the whole thing would look better if there were fire breathing engines attached to the wings. The Focke-Wulf Triebfluegel used to fire off the ramjet engines that were located at the end of the rotor blades and off he went. The main issue was that the rockets attached to the blades were not easy to control and the jetcopter’s design was such that the pilot had to land while facing the sky because they couldn’t see the ground behind them due to the flaming metal.

The second thing on this list is the Russian Tsar Tank that looked one of those cycles that that were used in circuses in the 1800s. The only difference being that the tanks here actually had armor and guns. The tsar tank was as dangerous as it seemed but the issue was that the length of the lead pipe was proving to be fatal for the people.

This is one of the primary reasons why the design did not get a heads up after the testing stage. The design paid attention to the wheels but did not pay heed to the things to whatever was going on at the back. It was seen that whenever the vehicle moved over mud, the wheels sank and were very hard to pull out. 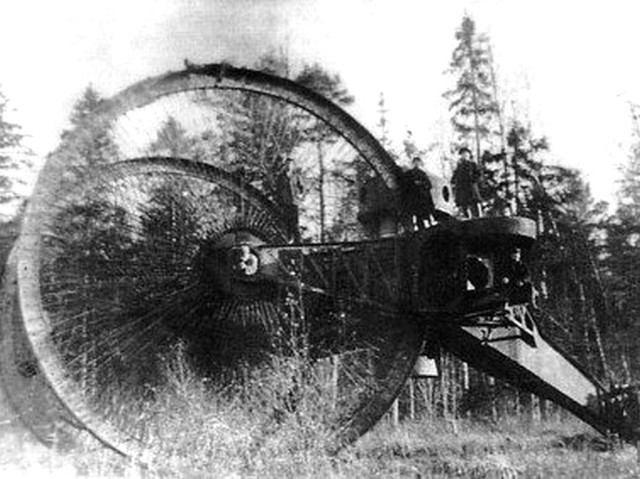 The corkscrew tank looked straight out of a horror movie. The vehicle travelled sideways and trotted upon different types of terrain. One strange issue was that the vehicle did not work well on smooth terrains, which means that it was of no use to the army.

Another problem was that the tank was extremely slow and steering was not easy because the screws could not move from side to side and there were no suspensions whatsoever.

The GE quadruped, or the walking truck, was another vehicle that was unique in its own right, driven with the operator’s own limbs. The vehicle never went pass the designing stage because it was costly to take the plan forward and it wasn’t even easy to operate the GE Quadruped.

Another issue was that that the quadruped was extremely noisy and could be heard from a distance, which is the sort of heads up that you don’t want to give your enemies when you are at war. Sure technology would have made things better, but the question remains that how would you use the GE quadruped.

The one wheel tank was a huge tank that was initially designed to destruct everything around it. It had to be operated by three people who had to be placed inside the ball. The main issue with this was that the guys inside had no idea where the ball tank was going. The idea was the one wheel tank was finally laid to rest after the German built only the prototype.

It seems like the aircraft was a popular choice when it came to experimentation. The flying aircraft carrier was oddly shaped to begin with because well, it had little planes hanging to it like trinkets on a piece of jewelry. The issue with the design was unearthed when the pilot Ed Schoch first took it for a test drive. He reported that that the trapeze hooks of the plane collided with the canopy and knocked him unconscious, while damaging his helmet.

Schoch was lucky enough to regain consciousness before the plane hit the ground and landed the aircraft on its skids. The shocking part was reserved for the end and that is the flying aircraft carrier was made without a landing gear. What are safety precautions?

Six test flights were done out of which four had a crash landing in a desert, which really didn’t appeal to the pilots and the entire responsibility of doing the test drives were left with Ed Schoch, which meant that he was trying to get himself killed.

The cannon shooter basically combined a scooter with a cannon (hence the name). The main idea behind the whole concept was to fire as you go. Imagine a scooter with a gun or simply have a look at the provided picture. It’s hard to steer with a person in the back, imagine how hard it must have been to move with an artillery canon that you are actually sitting on top of.

In conclusion, these are the top weapons or vehicles that were created, which I am sure must have made you say wow!