Amazing fact: the World’s dominant Military Air Power has 5 aircraft types that served over 50 years and still have a number of them operational. The huge imaginary hand that protects America by ruling the skies has only come to this supremacy by the fact that the US deals with the most advanced leading edge aviation and weapons technology of this world . But in the support role , the Air Force operations are still partly depending on outdated but reliable technology put in air frames that were built half a century ago or even longer. See which types have started their tour of duty over 5 decades ago, while a number of them still have a long career to go, despite their age.

The Boeing B-52 Stratofortress.

The picture was taken on 5 Aug 1954 during the maiden flight of the B-52A. Production stopped in 1962 with 744 of them built. Of the last version, the B-52 H there are 92 left with 80 operational. No longer with a nuclear tasks, the Boeing flies as a Launch Platform for Cruise missiles and drones. 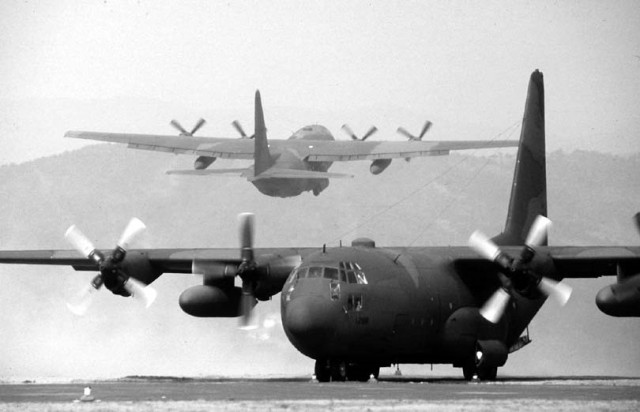 With the prototype flying in 1954, first C-130 was delivered to the USAF in Dec. 1956 . The type had the longest production run of any Military aircraft. In total 2300 of all variants were built and until today, and the Cargo transport is still in production. With a payload of 20 tons, the aircraft has been exported all over the world. 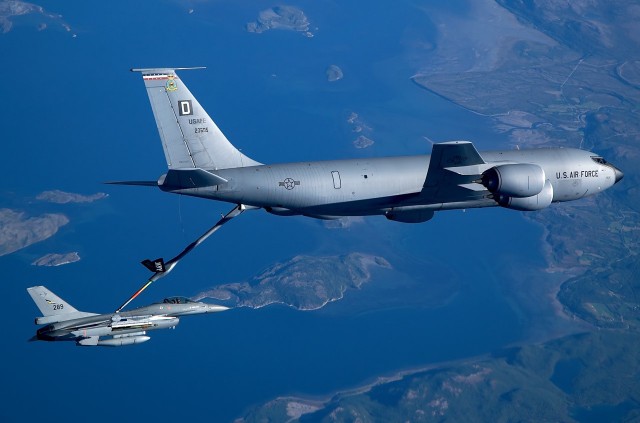 Sibling of the famed B-707, Boeing’s first intercontinental Passenger Jet. Of the airborne Tankers some 820 were built in all variants. Production started in Aug 1956 and went on until 1965. Those still flying are all upgraded with the modern bulky Bypass Jet engines and avionics.

The Lockheed U-2 Dragon Lady 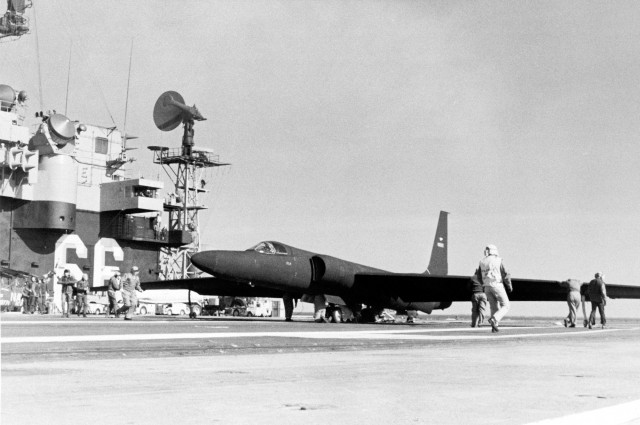 A left front view of a U-2 reconnaissance aircraft parked on the flight deck of the aircraft carrier USS AMERICA (CV 66).

This was a jet powered glider designed by the legendary Clarence “Kelly” Johnson, the Lord of Lockheed’s Skunk works. He also signed for the F-104 Starfighter and the SR-71 . The U-2 flew its first time operational in April 1956 as an odd single Jet engine Spy Plane. With a ceiling of 70.000 feet and 1700 miles of flight range it was the perfect Intelligence gathering platform, first for CIA and later for USAF who ordered 31 of them. The downing of Pilot Gary Powers by a Russian missile while on a secret U-2 flight over the USSR, brought the aircraft’s existence to the World in May 1960 and was the end of its status as the Jet that could fly beyond the reach of Russian AA weapons. 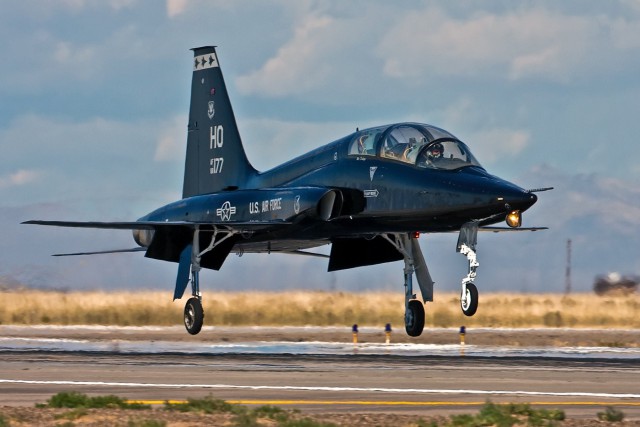 This sleek Jet went operational in March 1961 and was built until 1972. In total 1200 of them of which some 500 are still active and are planned for training duties until 2020. Over 60.000 pilots from a variety of Air Forces have earned their wings on this Jet, a timeless beauty .
But apart from that category that still flies with the USAF until today, there is another aircraft that is the absolute winner in longevity of operations with the US Military Services: The Douglas C-47 Skytrain and all its later variants (as the C-53 Skytrooper) , that served in the USAF from 1940 until 2008. In a time span of 68 years of reliable services, the C-47 flew in WWII, The Korean War and the Vietnam conflict until 1974. But with that , the role of this venerable veteran was not yet over. Enter the 6th Special Operations Squadron (6 SOS) which is part of the 1st Special Operations in Florida, a combat aviation advisory unit. Allegedly, they flew the type in a rather stealthy role until that final year 2008. 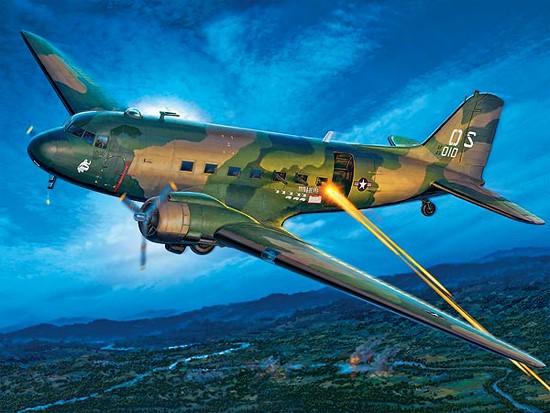 The photo above depicts the AC-47 Gunship variant, as was used in the Vietnam Conflict. In my book you can read about the sad end of those Spooky Warriors as they were sunk in Phuket, 2008. But also about the more modern version of this Gunship, the AC-47 T Fantasma, that flies in Colombia against the FARC rebels with Infrared Camera, carrying a machine gun and a rapid fire cannon in the fuselage. The 70 year old C-47 has in this version a truly lethal firepower that can engage the enemy for hours, while circling around their camp.

Where this blog ends starts my new book “The Dakota Hunter, in search of the legendary DC-3 on the last frontiers”. Recently, a number of very positive reviews have been published about that book, including one in the leading US vintage Aviation Magazine AIR CLASSICS ( with 5-Stars selected as Book of the Month, Aug. 2015), but also in WAR HISTORY ONLINE Magazine and now , just arrived, this review from Ms. Eileen Owsiani from New Hampshire, USA. She manages a Facebook group “Fans of the C-47 Skytrain”.

Please read this:
“Friends, I just finished reading Hans Wiesman’s, The Dakota Hunter and was so impressed I wrote a review. I know many of you are interested in aviation so I thought I would share it here since most of you are not members of my FB C-47 Skytrain Group.

When it comes to fulfilling your own dreams, you simply have to do the job yourself because no one else can ever feel as intensely as you do about those dreams.” –Hans Wiesman, The Dakota HunterThe Dakota Hunter: In Search of the Legendary DC-3 on the Last Frontiers by Hans Wiesman is an amazing retelling of one man’s quest to pursue his dreams and passions. A must read for anyone interested in aviation, travel, history, and of course the DC-3 aka Dakota. From the very start Wiesman’s engaging autobiography takes you to another world not experienced by most.

From his childhood in the wilds of post-war Borneo in the early nineteen-fifties to the far reaches of the final frontiers in the new millennium. You follow his quest and passion to find and obtain scarce Dakota wingtips. Traveling around the world he brings to life his experience. With a fantastic sense of humor, true passion for adventure, travel and the world around him you feel as if you are right there with Wiesman. You can feel his elation at seeing a Dakota no matter its condition derelict or still flying his passion comes through.The Dakota Hunter is filled with hundreds of photos documenting the hunt and bringing even more life to the book. He ensures the reader understands the historical and often unstable political situations as he travels to destinations like Bolivia, Colombia, and Madagascar. Throughout the book you learn that for Wiesman his quest for wingtips, is his quest and passion for the Dakota. In whatever state of disrepair, the Dakota is a beautiful airplane with an amazing history that deserves to be respected and honored for its service both during peace time and war.

A testament to this is the following excerpt from his trip to Thailand: “As they say, “Old soldiers never die, they simply fade away.” And that is exactly what happened with the derelict Dakotas of the Phuket Reef Squadron. They are gone forever, somewhere in the eerie depths of the Indian Ocean. Probably the best grave they could have wished for. They slipped quietly away into the abyss where no human claim nor quarrel can ever touch them again. I could not have dreamt up a better ending for these brave warriors.”Dreams, passions, history, travel, adventure, and respect for an amazing piece of aviation history come to life in Wiesman’s, The Dakota Hunter: In Search of the Legendary DC-3 on the Last Frontiers. We should all have the same courage to follow our dreams and take the road less traveled. As an aviation enthusiast I was quickly captivated by this page turning read and highly recommend it to anyone and everyone with a passion for aviation, travel, and following your dreams”.