After the death of William the Conqueror (1066-1087), by his will England is bequeathed to his favorite son – William Rufus while Normandy is inherited by William’s elder brother – Rober Curthose. The youngest son, Henry, receives only money and no lands to rule.

A War Between Brothers

After William II Rufus , the not so popular ruler of the English lands dies from an “incident” during a hunting party in second of august 1100, his throne is immediately seized from the youngest brother Henry, who imprisons Rufus’ justicar Ranulf Flambard in the Tower of London.

In that time, Duke Robert of Normandy is on a raid in the Holy Lands which he has joined in 1096. In 1099  at Ascalon in the Holy Lands, he contributes to the Crusader victory. Expectedly, upon his return, Robert, as a successor of his brother, claims his rights to the throne of England.

In July 1101, with the aid of the escaped Ranulf Flambard, Robert Curthose, the Duke of Normandy tries to forcefully reclaim the throne from Henry I, crossing the Channel with a few hundred of his men and aided with the forces of a few Anglo-Norman barons.

Henry I, however, expects that attack and routes his brother’s army on its way to England. The two armies meet at Alto in Hampshire. Claiming victory, Henry persuades Robert to renounce his claims for about 3000 marks yearly pension and full control over Normandy.

The peaceful contract between the two brothers, known as the “Treaty of Alton” will not last for long. Henry I inflicts heavy penalties to the barons that helped his brother. He accused the Earl of Surrey – William de Warenne of serious crimes, which the Alton treaty did not cover and banished him from England. After that, in 1102, he also took actions against the powerful baron Robert of Bellême and his brothers. Bellême was too banished from England after Henry I besieged the baron’s castles at Arundel, Tickhill, Shrewsbury, and Bridgnorth.

King Henry I of England’s Conquest of Normandy

Henry I, with no real intentions to pay his brother the promised pensions, decides to conquest the Duchy of Normandy, using not only raw power but political tricks as well. He starts by undermining his brother’s reputation while conquering the counties.

In the year 1104, Henry I of England leads his army to Dumfont,taking control over the county of Evreaux. In 1105, he takes down Caen, after burning the town of Bayeux. Henry I, however, is forced to return to England due to political issues  with the Investiture Controversy which demanded his immediate attention.

Settling those problems, in spring of the year 1106, Henry I decides to continue his conquest and bring down his brother Robert to his knees. After winning a quick battle and taking over the fortified abbey of Saint-Pierre sur Dives, he continues his march to the lands of the county of Mortain, situated in the southwest of Normandy. The county was the land of another loyal to Robert,  baron William of Mortain. 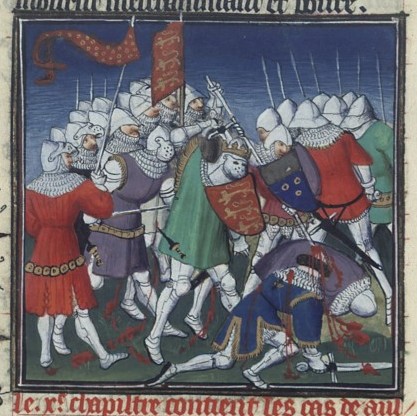 The battle which will resolve Henry I problem with his brother Robert Curthose and will be remembered in history as the Battle for Tinchebray.

Before the attack, Henry divided his forces into three separate divisions. He gave the control over his two main divisions to the barons mentioned above that accompanied him and also few other dukes, that including Alan IV, Duke of Brittany, William the Count of Évreux, and Robert of Grandmesil,  as well as Ralph of Tosny and Robert of Montfort. In the flank, Elias I of Maine was in command of the reserve.
The forces of the English king in haste besieged the castle of Tinchebray.

The king’s brother – Robert Curthose and count William de Mortain, who owned the castle, immediately led their forces to free it. Robert, who still had allies in Normandy, gathered his bannermen.

As a result Robert d’Estoutville, Robert of Belleme, and William Crispin  quickly responded to his call and joined forces with his army. The Saxon Edgar Aetheling, who accompanied him in the Holy Lands and who was also an uncle to his queen – Matilda of Scotland, did not hesitate one bit and rushed to help.

The forces of the two brothers the King of England and the Duke of Normandy clashed in a battle that did not last more than one hour. Henry’s reserve of  Maine and Brittany proved to be a decisive tactical decision. Attacking his invading brother, Robert Curthose and William de Martain managed to slightly push back Henry’s forces. This did not last for long since they were quickly attacked from the flank by  Elias I.
Robert of Belleme, the bannermen of the king’s brother doesn’t even bother to engage in battle. It was a total defeat for the Duke.

By the end of the Battle of Tinchebray, King Henry I of England captures his brother Duke Robert of Normandy and either kills or imprisons his men. In captivity are also Edgar Atheling and Count William de Martain. Lucky for him, Edgar Atheling is pardoned and allowed to return to Hertfordshire, but the same cannot be said for duke Robert and count William.

Both of them are held captive first in Devizes Castle and afterwards moved to Cardiff Castle where they stay until their last breath.

The famous Battle of Tinchebray was a key moment in history when the fate of Normandy and England was decided in just about an hour.
King Henry I of England reigned for 34 more years until his death on the 1st December 1135.