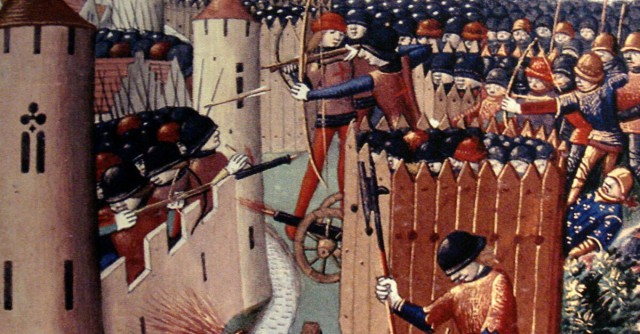 Castles and fortified towns were central to medieval warfare. Their strong defensive walls allowed small numbers of defenders to hold out against much larger forces. Though armies sometimes marched past and ignored them, this created risks. Small numbers of enemies could wreak havoc in an army’s rear, and until a castle or town was taken it was impossible to control the land around it.

So how did besiegers go about seizing castles?

The most obvious answer to sturdy stone walls was to smash them down. In the earlier centuries of the Middle Ages, catapults and trebuchets were used to launch stones at the defences. These grew in size and sophistication as siege engineers developed their art.

During the siege of Stirling Castle in 1304, Edward I of England refused to let the defenders surrender until he had used his new trebuchet, one of the largest ever recorded. Named Warwolf, it took five master carpenters and ten times as labourers three months to build. Disassembled for transport, it filled 30 wagons, and it could accurately launch a stone weighing as much as 300 pounds.

During the 14th century, canons became increasingly popular as siege weapons. Their prevalence allowed for heavy and effective bombardments – over 1500 bombard balls were launched at Maastricht during the seven week siege of 1407-1408.

We associate trenches with the wars of the late 19th and early 20th centuries, but they played a role in earlier eras.

Both attackers and defenders fired at each other during sieges, using bows and artillery, and even hurling rocks from the walls. This made approaching the castle or town very hazardous. If there was time, pioneers and sappers would dig trenches toward the walls, giving the attackers safe positions from which to fire, and eventually getting close enough to launch attacks.

Trench works and bombardments had a symbiotically defensive relationship. It was safer to dig trenches if the defenders were forced to keep their heads down through a bombardment, while trenches let attackers safely fire from shorter, more effective ranges.

Aside from bombardment, the best way to bring down walls was to undermine them. Like trenches, this relied on the attackers having time available, but sieges could seldom be successfully rushed.

Often the work of soldiers from mining communities, tunnels started safely out of range of the defenders’ artillery. All the usual tools of the miners’ craft were used to make a tunnel safe enough for the attackers to work in. Once it got beneath the walls, it would then be caved in, undermining the foundations and creating a gap in the defences.

Defenders would try to detect tunnels by placing bowls of water on the ground near the walls and looking for vibrations. They would even dig counter-mines, trying to intercept and stop the attackers. During the siege of Melun in 1420, King Henry V of England fought in a mounted combat against counter-miners in the siege tunnels beneath the city.

Attacking a castle or town was a costly and brutal business that took a higher toll on the attackers than the defenders. If there was time, then it was almost always better to starve the defenders out. If the attackers successfully prevented supplies of food from getting in, then the defenders would eventually have to give in, as during Owain Glyndwr’s siege of Harlech Castle in 1401.

There were downsides to a protracted siege. It meant keeping an army in the field for a long time, and this was not always possible. Troops raised by feudal levies were often only meant to serve for a set amount of time, for example 40 days, and would go home after this. King Henry II of England’s successes in siegecraft came through the costly use of mercenaries, who would stick around as long as the pay kept coming.

Starvation also failed if supplies could be brought in. Joan of Arc’s famed relief of the siege of Orléans in 1429 was possible due to the French defenders bringing supplies in across the river. 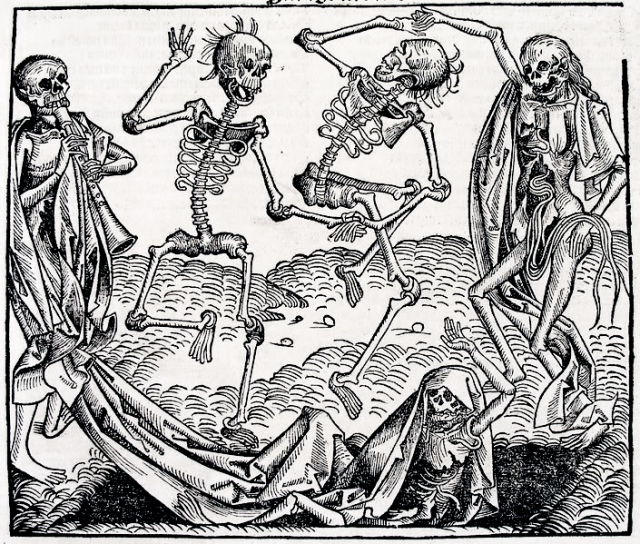 Sickness could be a huge problem for any medieval army. With thousands of men living close together, and no modern medicine, disease ran rampant.

Disease was particularly deadly in the enclosed confines of a town or castle under siege. With the bodies piling up, the defenders could not get away from the sickness. Without our modern understanding of germs, there was no way of combatting the problem. Attackers sometimes encouraged such sickness by flinging dead animals or disease ridden corpses over the walls. At the Siege of Rouen in 1418-19 the English threw dead animals down wells to contaminate the city’s water supply.

Disease could also be a problem for attackers. Outbreaks in the Crusader camp besieging Acre in 1189-91 killed many men and severely weakened the attacking force. 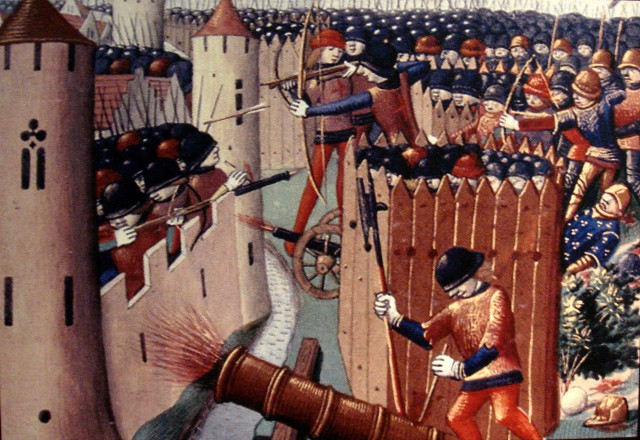 Horrifying as they could be, assaults were often the best way for attackers to end a siege. If time was pressing, or the defenders showed no signs of running out of supplies, then an all out attack could lead to a swift victory. Scottish King Robert the Bruce is reported to have led an assault across a flooded moat during his campaign against the English occupiers.

If bombardments or undermining had breached the walls then any assault would be through these gaps. If not then attackers had to assault the battlements from ladders, while rocks and other missiles fell on their heads, or approach from the rarer but safer confines of a siege tower.

Despite all the military tactics available, the most successful sieges were those that ended with talking. Starvation was a gruelling prospect for the defenders, and assault equally unappealing to the attackers. Under accepted rules of war, a town captured by force could be ransacked but one that surrendered could not. This encouraged agreements to surrender if the defenders were not relieved within a set amount of time. This, rather than an assault, ended some of the most significant sieges, such as Stirling in 1304 and Harfleur in 1415.