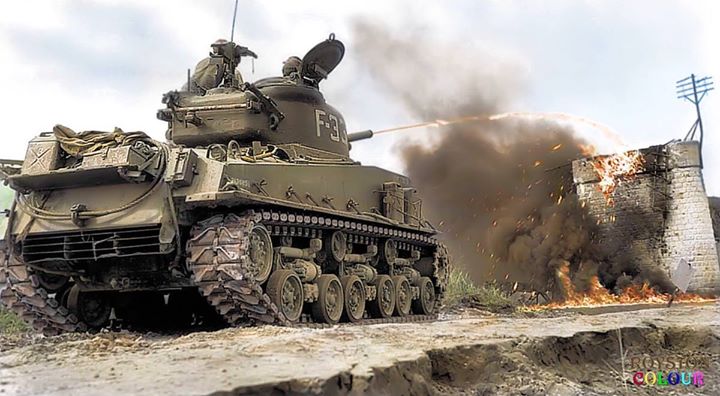 Brand new project by  Doug Banks and his team – the masters of colourisation.  The beauty of these colourised images is that colour, allows you to pick out and study the smallest detail. Their new project focuses on the the Korean War – the forgotten war.   Make sure your check out The Forgotten War In Color Facebook page.   It is the research that they do on each image that makes the captions themselves a history lesson. 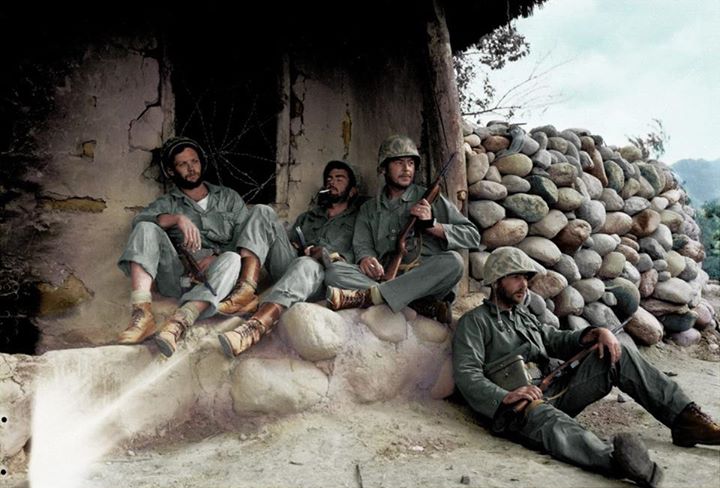 (Colorized by Lori Lang from the USA)  https://www.facebook.com/historyrestored?fref=nf 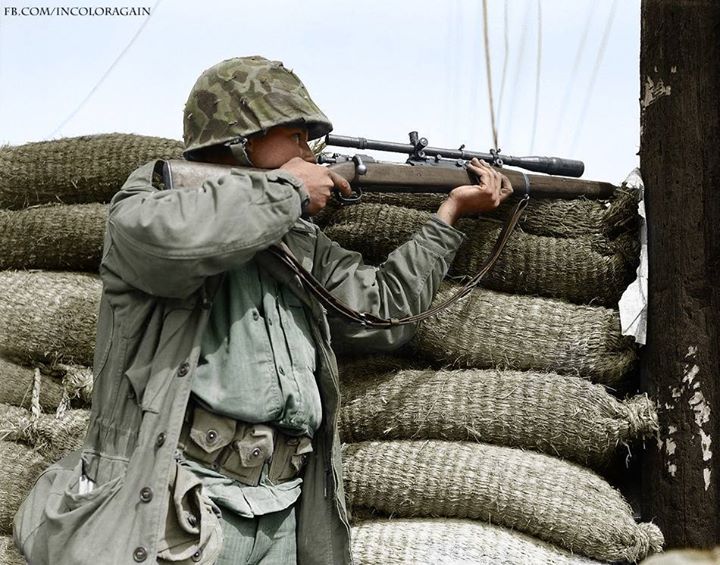 A US Marine marksmen with a Springfield M1903AI/Unertl Sniper rifle watches from behind a barricade for a North Korean sniper to show himself in Seoul, on September 28, 1950 (Colorized by Noah Werner Winslow)
https://www.facebook.com/incoloragain

The M4A3R3 variant of the Sherman tank on exercises in Korea. 18 September 1953.

This M4A3(105) HVSS Sherman is fitted with a flame gun mounted coaxially with its 105mm howitzer. Howitzer ammunition stowage was reduced to 20 rounds.  Its designation stands for the Pacific Ocean Area, with the flame gun developed by the Chemical Warfare Service in Hawaii. This design replaced the previous POA-CWS-H1 that had the flame gun replacing the tank’s regular armament. The POA-CWS-H5 could be constructed from either 75mm gun or 105mm howitzer tanks, but the design missed seeing action in World War II.  The Marines employed a single platoon of nine 105mm howitzer tanks in the Korean War attached to the Headquarters and Service Company of the First Tank Battalion. The crew was reduced to four Marines due to the space taken up by the flame equipment, with the TC inheriting the role of gunner as well. Note the infantry phone box mounted on the right side of the hull rear plate. 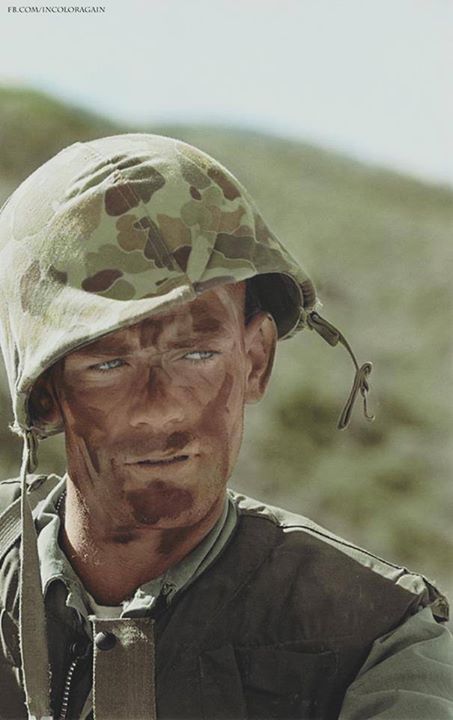 A US Marine at the 1st Marine Division outpost near the “No Fire” truce site at Panmunjom, Korea. June/July 1952. (An unpublished ‘Life’ magazine photograph by Michael Rougier) 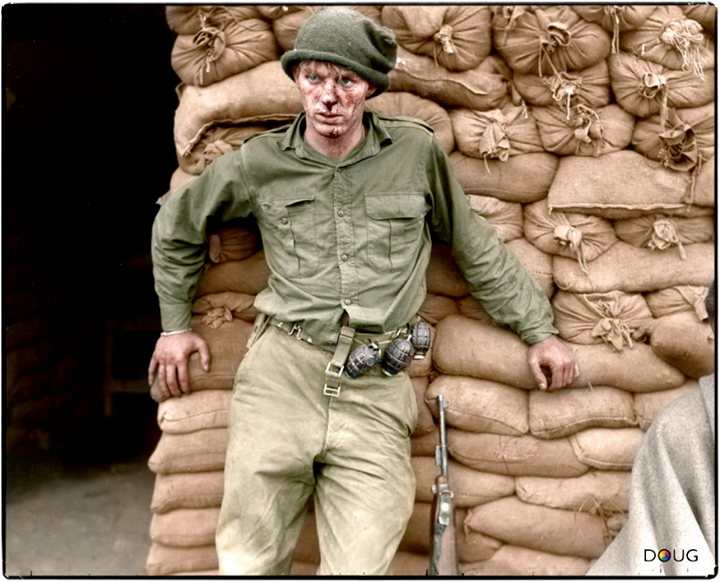 While act­ing as a sig­naller, Heath Matthews par­tic­i­pated in a company-sized fight­ing patrol on the night of 21 – 22 June 1952. The action was a raid against a Chi­nese posi­tion near Hill 166, west of the Jamestown Line. As the objec­tive was neared the patrol was caught in a dev­as­tat­ing enemy mor­tar bar­rage. Two Cana­di­ans were killed and sev­eral wounded. Hit in the face by shrap­nel, Heath Matthews was one of the wounded.

On the morn­ing of 22 June as a wounded mem­ber of the Charles Com­pany patrol waited out­side a front line bunker to receive med­ical treat­ment, Sergeant Paul E. Tomelin, an army pho­tog­ra­pher of the No. 25 Cana­dian Pub­lic Rela­tions Unit, snapped a highly evoca­tive photo of this dazed and wounded soldier.

Tomelin’s pho­to­graph would become the iconic pic­ture of the Cana­dian involve­ment in the Korean War and would sub­se­quently be dubbed as “The Face of War”. Of this now famous pho­to­graph one future reviewer would com­ment, “Among the hun­dreds of out­stand­ing pho­tographs in this pre­sen­ta­tion is one from the Korean con­flict enti­tled The Face of War. Taken by Paul Tomelin, it’s a black and white por­trait of a Cana­dian sol­dier just after a night raid on the enemy. Pri­vate Heath Matthews’ face is cov­ered in blood as he awaits med­ical atten­tion for his super­fi­cial lac­er­a­tions. The blood, com­bined with the weary and aston­ished expres­sion on the young soldier’s face, effec­tively por­trays the ter­ror of war. Look­ing at such a poignant image, one can­not help but feel a cer­tain degree of admi­ra­tion for the pho­tog­ra­pher him­self.” 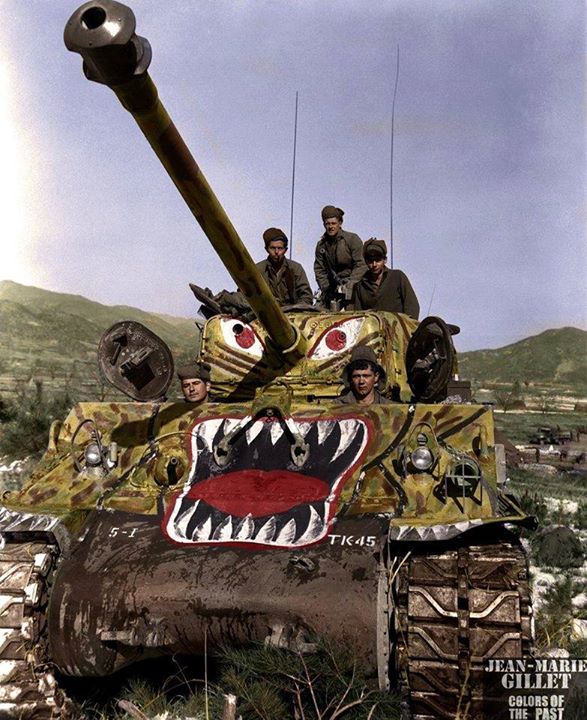 US soldiers prepare to advance along the Han River area, Korea, in their M-4A3E8 Sherman tank (painted with a ‘tiger scheme’ as a psychological effort to undermine Chinese morale), during the offensive launched by the 5th Regimental Combat Team against the Chinese forces in that area. February 18th 1951.

‘Operation Courageous’ (22-28 March 1951) was a military operation performed by the United States Army during the Korean War designed to trap large numbers of Chinese and North Korean troops between the Han and Imjin Rivers north of Seoul, opposite the South Korean I Corps. The intent of Operation Courageous was for I Corps, which was composed of the U.S. 25th and 3rd Infantry Divisions and the Republic of Korea (ROK) 1st Infantry Division, to advance quickly on the North Korean and Chinese troops and reach the Imjin River with all possible speed. Source: US Army – Department of Defense visual information (DVIC) (Colorised by Jean Marie Gillet from France)
https://www.facebook.com/colors.of.the.past 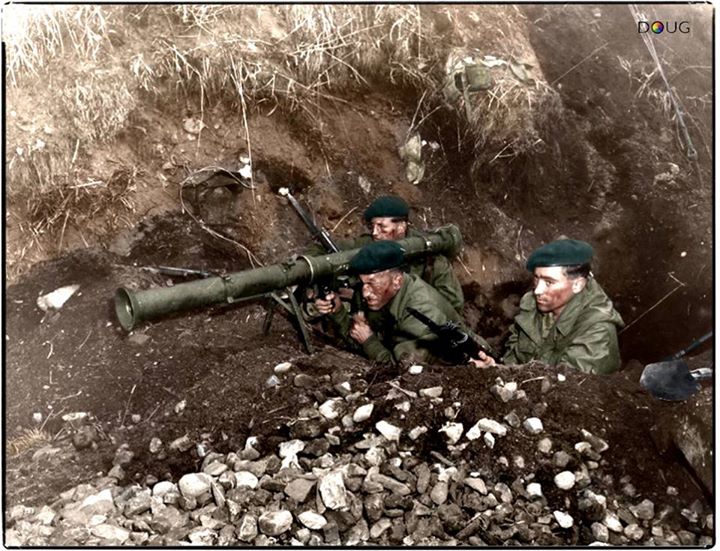 Royal Marines of 41 Commando, armed with an M20 3.5-Inch ‘Bazooka’ watch for enemy tanks during a seaborne raid on a North Korean rail supply route near Songjin, Korea, 6th October 1951.

On 10 November 1950, 41 (Independent) Commando joined the United Nations advance in North Korea where they served with the United States Marine Corps; the second time the two organisations had served together, the first being the Boxer Rebellion. During the Battle of Chosin Reservoir Lt. Col. Drysdale was given command of a 900 man unit of his own Commando, American, and South Korean forces called Task Force Drysdale.  Their hard fighting together with the American Marines and Army led to 41 Independent Commando being awarded the American Presidential Unit Citation that the 1st Marine Division earned.

The Commando reformed in Japan and in April 1951 were assigned to what eventually became the 1st Commonwealth Division. They raided the North Korean coast with the Republic of Korea Marine Corps until 41 Commando returned to England in December 1951. 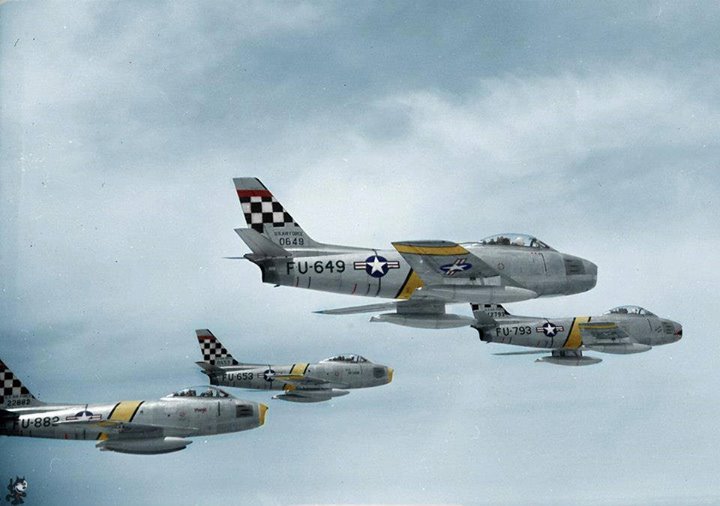 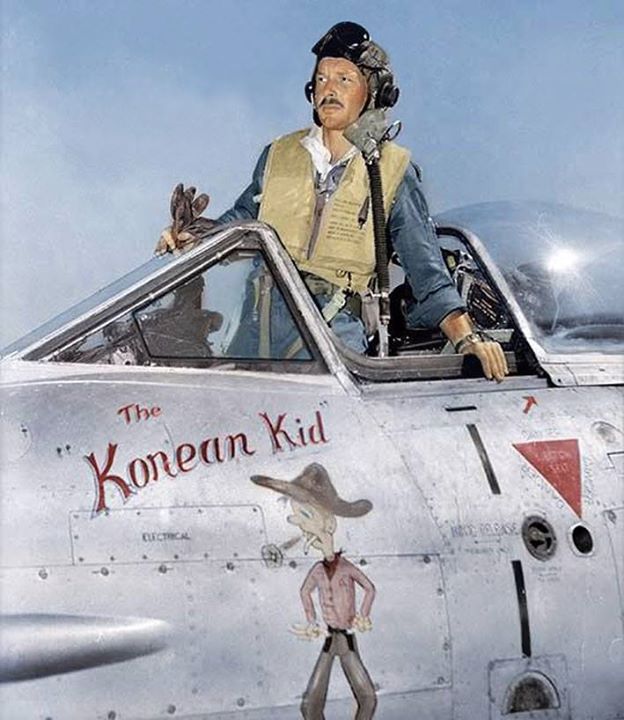 Australian Pilot Officer Randall (Randy) Green, a former member of No. 23 (City of Brisbane) Squadron RAAF prepares for a mission against targets in North Korea with No 77 Squadron RAAF.
The nose art on his aircraft reads “the Korean Kid’.

This Meteor, A77-316, was normally flown by Sergeant James C Kichenside, who served in Kimpo, Korea, from March until September 1952, completing 148 operational missions.

Sgt Kichenside was the youngest pilot in the squadron and was known as ‘the Korean Kid’. The ground crew of 77 Squadron decided to organise the painting of the logo on A77-316, after which a brief handing-over ceremony was held to ‘present’ the aircraft to Sgt Kichenside. It was standard practice that after a period of consolidation, and, whenever practical, a pilot could sign for and fly the same aircraft consistently.
He flew many missions in this aircraft until its last flight on 27 August 1952, when a mix-up meant he flew A77-258.  Aircraft A77-316 was piloted by Flying Officer Oelof M. Bergh RAF, an officer flying with 77 Squadron as part of an RAF exchange program to bolster the depleted numbers of operationally trained pilots. On this occasion the aircraft A77-316 was hit by ground fire, F/O Bergh ejected safely but spent the remainder of the conflict as a prisoner of war.

“Stories of Oelof are legion. He was one of the few RAF pilots who was chosen to fly in the Commonwealth Squadron in Korea.  He spent 18 months in the hands of the North Koreans who tried to break him. He spent most of his time up to his neck in freezing water in a pit. Oelof would always make light of this, although I believe he never fully recovered from the experience. He said that the North Koreans unusually sent him back before the end of the war as they couldn’t put up with the hard time he was giving them!”
(Wing Commander Mick A F Ryan – Retd)

(Colorized by Tom Thounaojam from India) 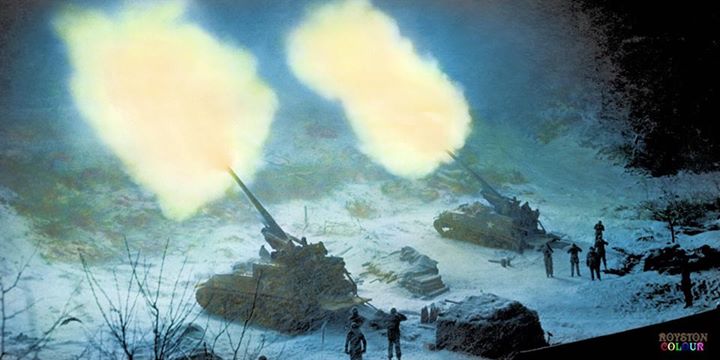 The M40 155mm Gun Motor Carriage was a self propelled gun based on a modified M4A3 Sherman chassis. It arrived too late to see significant service during the Second World War, but was used in large numbers during the Korean War.  The 937th Field Artillery Battalion was mobilized on the same day as the 936th and moved to Fort Hood, TX for training. It arrived in Korea on the same ship as the 936th and fired its first combat mission April 3, 1951. The battalion went in to line with the I Corps on April 30 near Uijongbu, Korea. During the Chinese Spring Drive the battalion fell back to Seoul and was moved to IX Corps. Battery A continued with X Corps and was attached to the 1st Marine Division. On May 17, 1952 the Battalion was attached to 2nd Division, IX Corps. For the action with 2nd Division, Battery C and Headquarters Battery received the Distinguished Unit Citation.  The battalion continued in general support to IX Corps from July 28, 1953 until October 9, 1954. The 937th fired 223,400 combat rounds in Korea and suffered 13 killed in action and 156 wounded in action.

(Colourised by Royston Leonard from the UK)
https://www.facebook.com/pages/Colourized-pictures-of-the-world-wars-and-other-periods-in-time/182158581977012 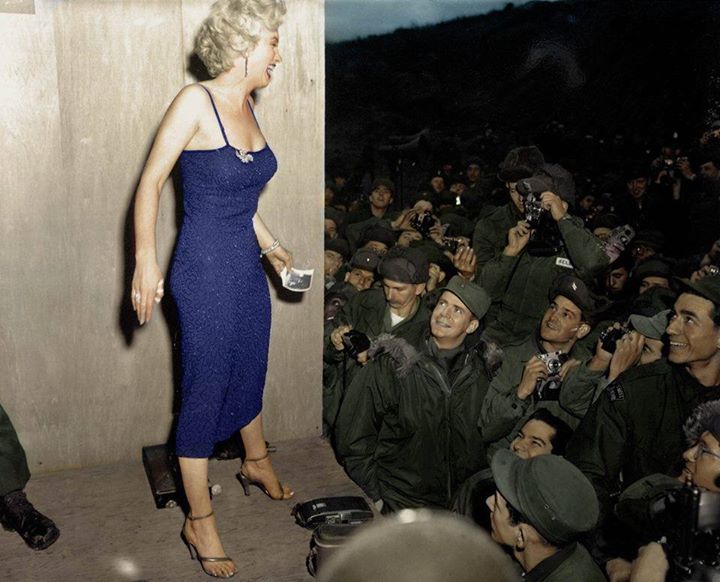 Marilyn Monroe poses for soldiers in Korea after a USO performance at the 3rd U.S. Inf. Div. area, February 17, 1954.

In February 1954, actress Marilyn Monroe traveled to Korea to entertain the troops. Right before she flew into Korea, Monroe was in Japan on her honeymoon with Joe DiMaggio. She flew alone to Korea as DiMaggio was still attending to business in Japan. In the four days Monroe spent with the troops she performed ten shows. She later said that performing in Korea helped her get over her fear of live performances as she entertained audiences that totalled more than 100,000 troops. She remarked that the trip “was the best thing that ever happened to me. I never felt like a star before in my heart. It was so wonderful to look down and see a fellow smiling at me.”

The troops greatly enjoyed her visit. Ted Sherman, who served in the Navy during World War II and Korea, recalled: The movie star was at her glamorous best when she performed ten USO shows in four days for U.S. soldiers, airmen, Marines and sailors during the Korean War in early 1954. I was with a group of Navy guys who happened to be at Daegu Air Force Base when we heard Marilyn would entertain there that night. We convinced our transport pilot to find something wrong with our R4D transport, so we could delay the return flight to our ship in Tokyo Bay for that one night.

It was a great evening for all the homesick guys who were dazzled by the movie star’s performance. The sight and sounds of Marilyn singing “Diamonds Are a Girl’s Best Friend” is a memory I still cherish. (historybyzim.com) (Photo Credit: National Archives) 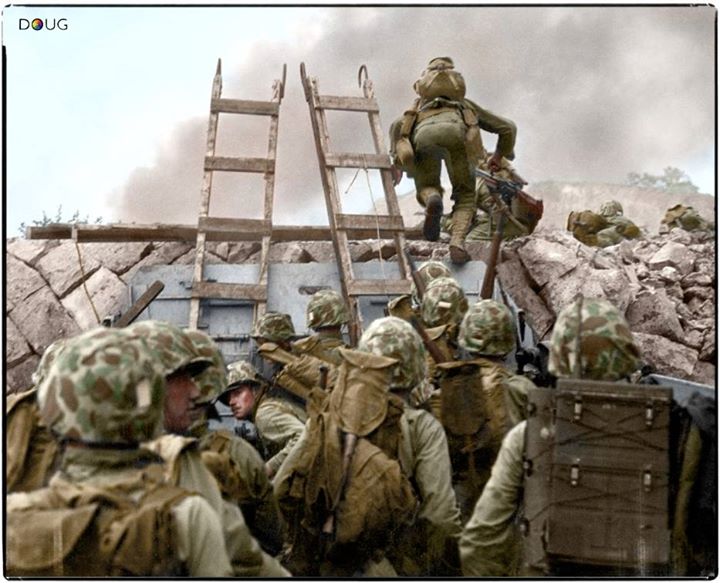 At 1724, with intermittent rain squalls spitting down, the leading waves of 1/5 crossed the line of departure and headed for that ominous seawall. Preceding them was a shower of 5-inch rockets, more than 2,000 of them, fired from LSMR-403, blanketing the beach and its north flank. Almost too soon for the Marines in them, the landing craft snubbed their noses against the sheer face of the seawall, and the scaling ladders were thrown into place.

Among the first over the wall was First Lieutenant Baldomero Lopez, leading his 3d Plt of A/l/5. A former Navy enlisted man in World War II, Lopez had entered the Marine Corps via the United States Naval Academy, where he had been a standout boxer. Confronted immediately by a bunker, Lopez silenced it with a grenade, then turned to hurl another grenade at a second bunker. Bullets ripped into his arm and shoulder. The armed grenade dropped to the ground. Unhesitatingly, Lopez fell upon the grenade and drew it to him, absorbing the full force of the blast as the grenade detonated. His selfless action would bring him a posthumous award of the Medal of Honor.

By 0200 on the morning of 16 Sept., Inchon was firmly in Marine hands. A 1st Marine Div that had been cobbled together from nothing had streamrolled everything in its path. Total casualties amounted to 21 Marines killed, one missing and 174 wounded. It had been a textbook Navy-Marine operation, one that had taken the North Koreans completely by surprise. Despite the staggering natural obstacles, by the end of D-day Rear Admiral James H. Doyle had put 13,000 troops ashore.

Speaking of the commander who had refused to accept the impossibility of Inchon, Lt/Gen Shepherd, a future Commandant of the Marine Corps, said, “Doyle is a great commander and is the best naval amphibious officer I have ever met.” (koreanwar-educator.org)