You’ve heard of snail mail, email, and drones delivering mail, but what about Missile Mail?

Amazingly, the idea of using weapons to deliver mail has been around since medieval times. Back in the day, arrows could be fired over the walls of a castle or over a river to carry a letter to hard to reach locations. However, Germans (or more accurately Prussians) discussed using artillery shells to send mail as early as 1810.

Residents of Tongo even considered using British-made Congreve rockets to send mail because of how difficult it was for ships to land on their island. Once an Austrian successfully used a rocket to deliver mail over five miles away, the idea seemed to be taking off—until funding was cut.

In the 1950s, the United States Government decided it was time to give this idea a go, although they secretly had ulterior motives.

In 1959, the United States Postal Service (USPS) was approached by the Department of Defense (DoD) with an offer. Both the DoD and the USPS had an interest in sending mail quickly and modernizing the mail system.

Although the rocket idea had not been very successful in the past, the DoD had just created some new missiles that should increase accuracy and distance greatly. These were known as cruise missiles, and were normally tipped with a nuclear weapon. Essentially the DoD offered the USPS a short to medium-range ballistic missile to send their mail.

Postmaster General Arthur E. Summerfield was personally ecstatic about the idea. In his letters, including the ones to be sent with the missile itself, he spoke of how fantastic the idea was. Whether for his own fame, the idea of revolutionizing mail delivery, or out of excitement for new technology, he was smitten with the idea.

The missile in question was the Regulus I, a submarine-launched missile. Its effective range was about 500 nautical miles (575 miles, or 930 kilometers, on land). The nuclear weapon on the tip was removed (obviously) and replaced with two mail containers. Postmaster General Summerfield personally helped load the containers with 3,000 copies of a letter he wrote: 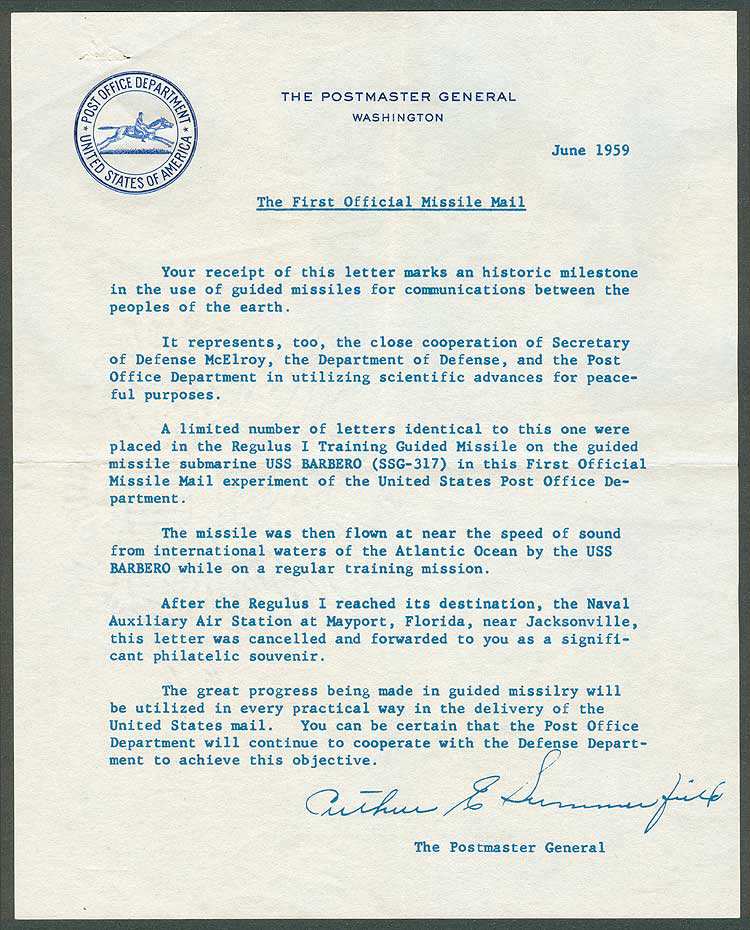 The letters were addressed to President Eisenhower, Vice President Nixon, every state governor, and every Congressman in America. All of the seamen aboard the submarine that launched the mail, the USS Barbero, also received their own souvenir copy. The Post Office officially set up a branch on the Barbero before it left Norfolk, Virginia on its mission.

The Barbero arrived off the coast of Florida, and launched the missile towards the Naval Auxiliary Air Station at Mayport. This approximately 200 mile journey took only 22 minutes, and the missile landed without issue. Summerfield was eagerly waiting at the landing site. He soon put out a statement saying:

“This peacetime employment of a guided missile for the important and practical purpose of carrying mail, is the first known official use of missiles by any Post Office Department of any nation. Before man reaches the moon, mail will be delivered within hours from New York to California, to Britain, to India or Australia by guided missiles.”

What was Really Going on?

The astute reader will recognize that something does not quite add up here. Despite Summerfield’s enthusiasm, there are some problems with this plan.

First off, the cost would have been prohibitive since the missiles cost hundreds of thousands of dollars. Second, there are only so many cruise missiles to go around, so they could not be used frequently. Third, these weapons were created for military purposes, specifically against the Soviets. Why would the military divert them for civilian use?

And therein lies the answer: it was all a Cold War stunt. The DoD wanted an opportunity to show off the precision of the new cruise missiles to send a message to the Soviets. If America can deliver mail by missile, we can certainly deliver a nuclear payload right on top of you.

The DoD also hoped the stunt would be politically useful at home. If Americans were excited about the new missiles, politicians could justify giving the DoD more funding to make more of them.

It is unclear whether Summerfield’s enthusiasm was simply a part of this propaganda, or whether he was kept in the dark. Either way, he publicly stated that the USPS was looking forward to a continued relationship with the DoD. That relationship never really happened.

A number of other attempts at Rocket/Missile Mail have been made since the 1950s. These attempts have generally been conducted by private companies or enthusiasts.

Read another story from us: Tracking Santa and Nuclear Missiles – 5 Interesting Facts About NORAD

As air travel has become faster, and as Amazon has launched its new drone delivery service, it is even harder to justify using missiles to send mail. However, there is one glimmer of hope for the rocket-lovers out there. Jeff Bezos, the owner of Amazon, has also begun to experiment with rocketry with his private aerospace company, Blue Origin.


Still, it’s hard not to feel a little bad for Mr. Summerfield.