The greatest fighter ace of the First World War, Manfred von Richthofen, was born on the 2nd of May 1892.

Becoming an officer cadet at the age of eleven, von Richthofen joined the cavalry in 1912. With World War One on the horizon, cavalry would soon be a thing of the past. It was as a pilot that von Richthofen would shine.

A New Sort of War

Combat between fighter planes was a new phenomenon in the Great War. German pilots, under the leadership of Oswald Boelcke, led this new form of warfare. There was glamour to their work, but also a high death rate.

Inspired by their heroics, von Richthofen transferred to the air service in May 1915 but was not made a fighter pilot. He did reconnaissance on the Eastern Front, joined a bombing unit, and in September came to the Western Front.

Sent to the flying school at Döberitz in November 1915, his determination made up for a lack of natural skill. Having proved his worth as a pilot, he returned to the war in March 1916. He yearned to serve under his hero Boelcke, and his opportunity came later that year when his brother introduced him to the great aviator. Boelcke invited Manfred to join his new hand-picked squadron.

As part of Jasta 2 squadron, von Richthofen saw his first success on the 17th of September, 1916, shooting down a British F.E.2b. Ruthless and calculating, von Richthofen used the sun, wind and cloud cover to stalk his prey before suddenly attacking.

Boelcke died in battle on the 28th of October, and the squadron was renamed Jasta Boelcke in his honour.

Von Richthofen continued to impress. On November 23rd, he killed British flying ace Lanno Hawker, his eleventh kill. On the 4th of January, he took down his sixteenth plane, becoming one of Germany’s top aces. He was awarded the order Pour le Mérite and given command of Jasta 11, his squadron.

April 1917 was a period of great success for the German pilots, known by von Richthofen’s opponents as ‘bloody April’. In only five days, the British lost 75 planes and over ninety men to the German fliers. Across the month, von Richthofen alone took out 21 British planes. 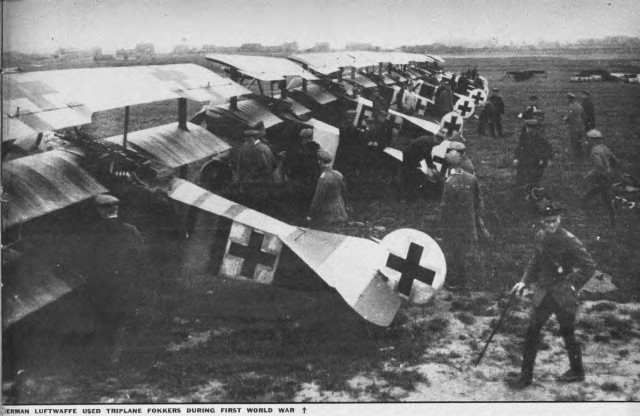 From the end of Bloody April, German commanders created larger 20-plane formations. Von Richthofen was given command of the first one to be made permanent – Jagdeschwader 1.

This new unit was a poster child for the German war effort. Given a mobile headquarters and their motor pool, they moved around the line, appearing suddenly wherever they were most needed. The whole unit painted their planes in bright colours, and von Richthofen was nicknamed the Red Baron for his plane’s colour. This flamboyance earned them the nickname of the Flying Circus.

Encouraging ruthless patience, von Richthofen trained his fliers into a deadly fighting force. He ensured only the highest of standards, and paid attention to individual strengths and weaknesses, deploying men in the positions where they would serve best. All were responsible for maintaining their guns in top condition.

A Brush With Death

On the 6th of July 1917, von Richthofen came close to death. Hit in the head by a British bullet, he was left temporarily blinded and half paralysed. Just managing to crash land behind friendly lines, he was rushed to a hospital and found to have a fractured skull.

He returned to duty on the 26th of July without having fully recovered. Headaches, dizziness, and nausea hampered his flying. His kill rate fell, but he was determined to get back into the war.

Bloody April was a high the Germans would never again match. A new generation of British planes, including the Sopwith Camel, outmatched what the Germans had. The entrance of American industrial might into the war made things worse. The Germans had better-trained pilots, but not the resources needed to win.

On August 28th, 1917, a new plane was launched, the Fokker Dr I Triplane, and von Richthofen soon adopted it. Highly manoeuvrable and able to climb quickly, it sacrificed speed for agility. With the Germans fighting defensive battles over their territory, its advantages far outweighed the speed issue. For the Flying Circus, it briefly provided a match for Allied planes.

But it had a significant defect. The canvas tore away from the upper wing during long dives, causing the plane to collapse. Good pilots were lost, and the Triplane was withdrawn from service. Anthony Fokker presented von Richthofen with a personalised improved and strengthened model, and the Red Baron remained the pilot of this distinctive plane.

In March 1918, Germany launched its last great offensive. The air force was central to this, directing artillery bombardments at key moments. New units and larger formations were formed for the occasion.

On  March 21st, 1918, Operation Michael began. For two whole days, Germany dominated the skies. Von Richthofen had the victory he and his men had long awaited.

The Allies reinforced their squadrons, creating more challenges and more targets. Von Richthofen racked up more kills, his total now exceeding 80, but while his men prospered his morale plummeted.

Dying as he Lived

On Sunday, 21st of April, 1918, von Richthofen led his final mission. Sent to take out British reconnaissance planes before a German advance, he led his men over enemy lines.

Engaging with British and Canadian fliers, von Richthofen broke the rules, becoming separated from his squadron and flying low to the ground. While pursuing an enemy plane, he was hit – possibly by an enemy pilot, possibly by gunners on the ground. He crash landed behind enemy lines, and by the time anyone reached his plane, he was dead.

Manfred von Richthofen was the most famous and successful air ace of the First World War. It is tragically fitting that like so many fliers of the war, he died young – a national hero at only 25 years old.