Often described as the turning point for the Pacific in World War 2, the Battle of Guadalcanal represented the moment that Japanese expansion in the Pacific would cease and the Marines would take the offensive.

But to call it a moment doesn’t do the six-month long struggle for the island justice.  For the Japanese were not accustomed to losing and they would not give up the island quickly.

Fortunately for the United States, men like Gunnery Sergeant John Basilone and the United States Marine Corps were ready for a fight.   Gunny Basilone holds a place of lore in Marine Corps history as his actions during the struggle for Guadalcanal would earn him the Medal of Honor while setting the tone for what the Japanese could expect from American Marines.

Always Looking for a Fight

John Basilone was born in Buffalo, New York in 1916.  Remarkably, this Marine Corps legend would actually begin his career as a warrior with the United States Army.  He enlisted in 1934 and served for several years in the Philippines.  While stationed in Manila, he would prove his ability to fight in peacetime through boxing where he would earn a championship.

After his time on active duty was over, John was discharged and worked for a time as a truck driver.  Not content with his new role in life, John longed to go back to Manilla and believed he could get there faster if he were in the Marines.  John enlisted in the Marine Corps in 1940 and within 2 years would take his place in Marine Corps history.

Despite his initial motivations for joining the Marines, John’s desire to be stationed in Manilla would be interrupted by the Japanese attack on Pearl Harbor and America’s entrance into the war.  For Basilone, his return to the Pacific would take him to Guadalcanal with Dog Company, 1st Battalion 7th Marines.

Despite not being fully prepared to take back the island from the Japanese, the construction of a Japanese airfield on Guadalcanal that could threaten Australia pushed the issue. The Marines landed on August 7th, 1942 and secured the partially constructed airfield.

The Navy Seabees would begin to finish the airfield and renamed it Henderson Field after a Marine pilot who was killed during the Battle of Midway. But the Japanese would not give up the island that easily and the Marines on Guadalcanal would be in for 6 months of brutal night attacks and Banzai charges.

It would be one such attack in late October of 1942 that Gunnery Sergeant Basilone and his machine gun sections would virtually annihilate an entire Japanese Regiment.

The defense of Henderson Field was essential and Basilone commanded two machine gun sections on the front lines of that defense.  On October 24th, 3,000 members of the Japanese Sendai Division would launch a major assault on the American lines that would last for two days.

Basilone’s men had good defensive positions with well-defined fields of fire.  But the sheer number of Japanese throwing themselves at the lines would push these machine guns to their mechanical limits.

The worst of the attacks would come at night as the Japanese would emerge from the pitch black jungle, throw themselves at the wire, and charge the American positions.  During the night fighting, one of Basilone’s machine gun positions was overrun.

John quickly picked up a machine gun and repositioned it amongst heavy fight to fill the gap in the line.  As the team began to run low on ammunition, Gunny Basilone would brave the overrun supply lines to retrieve more ammunition often killing multiple Japanese at point blank range with his .45. 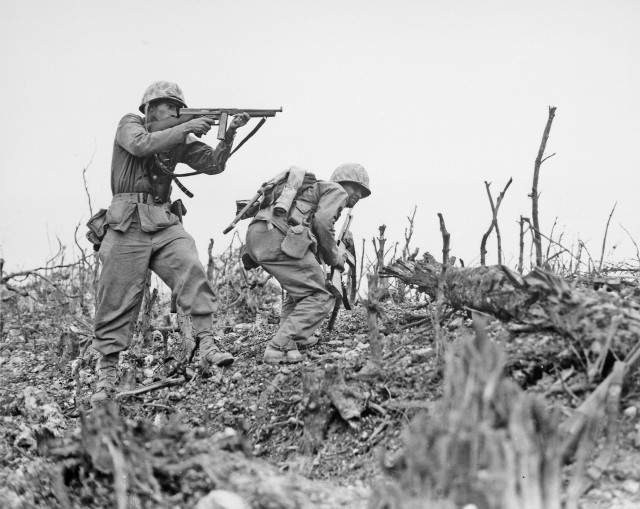 Over the next two days, without sleep or food, Basilone’s men would testify to the fighting spirit and gallantry displayed by Basilone whom they credited for their continued will to fight.

Whether it was repairing downed machine guns under heavy fire or running out to clear a field of fire by pushing over the piled up Japanese bodies that obstructed his guns view, Basilone represented the best traditions of the Marine Corps and set the tone for Marine victories throughout the Pacific.

Fighting Till the End

When the late October Japanese offensive was over, an entire regiment of Japanese would be virtually annihilated by Basilone and his men and the Japanese would never seriously challenge Henderson field again.  For his actions that day, Gunnery Sergeant John Basilone would be awarded the Medal of Honor.

Welcomed home as a celebrity, the Marines would assign John Basilone the role of selling war bonds at home.  Extremely discontented with his new role, Basilone pleaded for a return to the fleet.  He turned down a commission and offers to become a trainer stateside.

He was finally granted his wish and transferred to 1st Battalion 27th Marines in preparation for the upcoming invasion of Iwo Jima.  Once thrown back into the fire of combat, Basilone would prove that he had not lost his edge or willingness to fight.

With his unit pinned down by heavily fortified blockhouses, he moved around the Japanese positions and single-handedly destroyed them with demolitions and grenades.  Not yet done, he later helped a Marine tank through an enemy mine field before being mortally wounded by Japanese mortar and small arms fire.

Gunnery Sergeant John Basilone died on February 19th, 1945 on the volcanic rock of Iwo Jima.  For his actions that day, this Medal of Honor recipient was awarded the Navy Cross.

He was the only enlisted Marine to receive both the Medal of Honor and Navy Cross during World War 2 as he valiantly earned the respect of his men, the admiration of the entire Marine Corps, and a well-deserved place in warfighter history.