A little comic relief really does work to calm the nerves and reduce tension. A welcome and a nod can make a new and frightening place seem for just one second a little less scary. For U.S. troops in WWII that welcome comic relief often came in the form of a beloved big-nosed cartoon named Kilroy.

Kilroy, a Ziggy like cartoon peeking over a wall, told soldiers in caption that he had blazed the trail for them. They knew that their comrades had been there before them and it gave them a little boost before the proverbial crap was about to hit the fan.

So who was Kilroy? Most sources and historians think that the origin of the tag was James J. Kilroy, a shipyard inspector. He was a riveter paid by the rivet. Workers marked their rivets with chalk, and Mr. Kilroy didn’t want anyone taking his credit so he marked his rivets with the statement “Kilroy was here”.

A lot of these marks were in hard to reach places once the ship was entirely assembled and were not disturbed or painted over, so service men going to war would often see them when they shipped out. The phenomenon was interesting to them and it became superstition evolving into a meme of sorts. Soldiers thought that ships in which a Kilroy tag was found were good luck because the fastidious Kilroy had properly checked that it would be strong against the enemy. 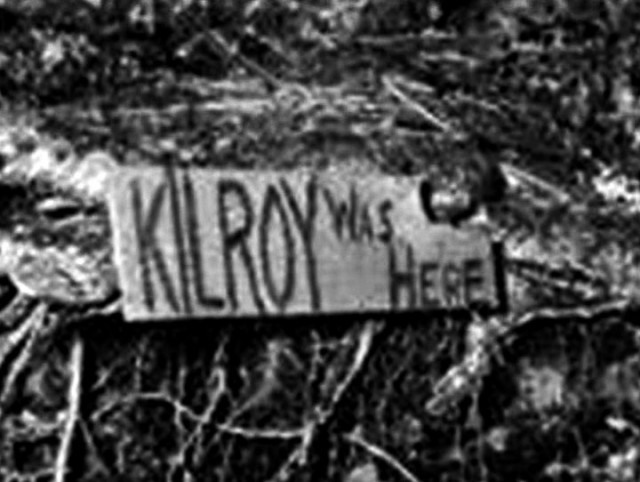 The original markings didn’t include the cute little figure peeking out, but as servicemen began copying the phrase at points all over Europe, he quickly became a popular addition. Speaking of popularity, it became something of a game to find a place he hadn’t and to be the first to tag it. Kilroy popped up all over the world wherever a battle was being fought from the Pacific back ‘round to the Atlantic.

The phenomenon wasn’t only American – other Allies had versions too, like “Mr. Chad” for the U.K. and “Foo” for Australians. In fact, the figure now recognized as Kilroy is actually Mr. Chad. Chad came with funny sarcastic phrases like “Wot? No engine?” painted on a glider and when he merged with the Kilroy phenomenon, those phrases were replaced with “KILROY WAS HERE”.

Legends of where they were found abound and as the word “legend” suggests, it’s fun to hope that they were true. One story involves Stalin going into a previously unused restroom at the Potsdam Conference to later say upon emerging, “Who is Kilroy?” The phrase is said to be on all of man’s greatest landmarks from the Great Wall to the moon. In a barn in Bastogne, it was written “KILROY WAS STUCK HERE”.

The meme was fun for the Allies, but it confused and paranoid both Hitler and the Japanese in WWII. The Japanese at Guadalcanal found a tank with the phrase and reported it to senior officers who were baffled. When Hitler heard of Kilroy and his miraculous penchant for showing up before his fellow allied soldiers (like on a Japanese island in the middle of nowhere), he assumed Kilroy must be a super-spy and set out to find him.

After WWII, Kilroy continued to make appearances in popular culture and was eventually a comfort and comic relief during Vietnam. Perhaps the most fitting appearance he’s made or will ever make is on the WWII Memorial in Washington D.C. Because Kilroy WAS there.