In late January and throughout February 1943, American troops had their first major engagements with German forces in World War II in Tunisia. It really didn’t go well for the Allies in the short term and certainly not for the Germans in the long term.

If you asked General Dwight D. Eisenhower, Supreme Commander of the Allied Expeditionary Force in North Africa, who was at fault for German troops continuously overrunning American positions through most of February, he would, and did, implicate General Lloyd Fredendall.

Fredendall, a general seldom seen on the front lines and most often some 60 miles back in a bunker, was relieved of command after the mostly disastrous Battle of Kasserine Pass. 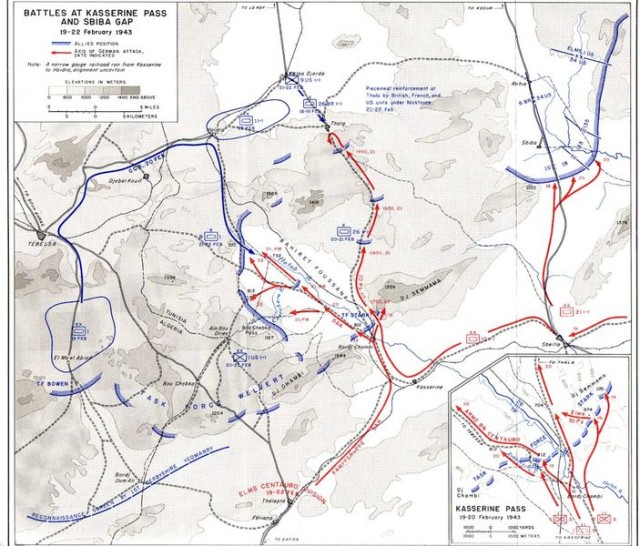 In Central and West Tunisia lies the Grand Dorsal chain of the Atlas Mountains and a two-mile wide gap called Kasserine Pass.The Americans, after Operation Torch and their landings in French Morocco and Algeria, rushed their II Corps towards Tunis in hopes of reaching it before the Germans could mount a defense.

They were too late, however, as Rommel had anticipated this and was rapidly moving troops and supplies over from Sicily. Though the U.S. Army’s II Corps and the British 1st Army drove all the way into central Tunisia and the foothills of the Atlas Mountains, they were stopped there.

Meanwhile, to the Southeast, British 8th Army troops had taken Tripoli in Libya and were building up forces to attack the German line between there and Tunis.

The engagements before the Germans advancing on Kasserine Pass were where the Americans first truly showed their lack of understanding of German tactics and mobile warfare.

Free French troops were holding the town of Faïd, East of Kasserine, and the pass it sits in through the mountains when the German 21st Panzer Division attacked. The Free French were being pushed back, so U.S. artillery and tanks from the 1st Armored Division came to assist.

In his book Forward Observer, Edwin V. Westrate, who saw the horrific folly, recounted it like this:

“It was murder. They rolled right into the muzzles of the concealed eighty-eights and all I could do was stand by and watch tank after tank blown to bits or burst into flames or just stop, wrecked. Those in the rear tried to turn back but the eighty-eights seemed to be everywhere”

On the insistence of Rommel, who wasn’t concerned with the slowly amassing British 8th Army to his South, the Germans pushed further West. They took Sidi Bou Zid and Sbeita (both between Faïd and Kasserine) and Feriana (Southwest of Kasserine) by mid-February.

As they were totally outmaneuvered by German troops, the Americans quickly fell back to take defensive positions in the passes into the Western Grand Dorsal. These were Kasserine, Sbiba to the Northeast, and the pass North of Feriana, to the West.

The Germans were now doing well – they had good gains afterward in the Kasserine pass. Also, we can’t entirely blame Rommel for the coming blunders. Italy’s Commando Supremo was the ultimate deciding force for Axis operations in North Africa at this time. When Rommel submitted his plan to Kesselring to push up the Kasserine Pass to the Allied supply depots in towns like Tebessa to the Northwest, Kesselring, in turn happily passed them on the Commando Supremo, and they came back altered.

The Italians decided that attacking up both the Kasserine and Sbiba Passes was the plan, which horrified the German commanders who knew it would mean splitting their forces and exposing their flanks.

Nevertheless, they followed through with the commands of higher offices and commenced the attack on February 19th. The 21st Panzer Division, moving on Sbiba, had initial success, but were pushed back by the next day. The more concentrated German force moving into the Kasserine Pass were opposed by American troops, including the 19th Combat Engineer Regiment, and artillery and Free French artillery.

Very little progress was made by the German troops that first day under heavy artillery fire. Rommel ordered the 10th Panzer Division, held in reserve, as well as the Afrika Corps assault group and the Italian 131st Armored Division Centauro to join the assault the next day.

On the night of February 19th, German and Italian troops overran American positions on the hills on either side of the pass and by mid-afternoon the next day, the American line holding the pass was broken. This broke the battle further into the mountains into two fronts, one along the Hatab River valley (the Southern route to Tebessa) and one through the town of Thala (the Northern road to Tebessa).

The Americans held along the Hatab River and launched a counterattack, breaking the German and Italian advance on February 22nd, taking 400 prisoners. The Americans defending Thala dug into a ridge line and fought with determination, as they were pushed back ridge by ridge, knowing that if they lost the position, Tebessa was threatened and troops were cut off from supplies.

They managed to stop the German advance by nightfall and were reinforced the next day by British troops. A massive artillery barrage from the Allies further stalled the German advance and before long, Rommel decided to call off the attack, satisfied that Axis forces had secured the foothills and central Tunisia.

Kesselring, however, couldn’t have been more disappointed. Where Rommel saw a satisfying, though lackluster end to the assault, Kesselring saw more opportunities to push the Allied forces back and take a lot more ground. Rommel, instead, turned his focus to reinforcing the German lines to the South, against the British 8th Army, a maneuver that had proved futile by early April of the same year.

In total, the battle of Kasserine Pass and the prelude to it saw 10,000 Allied casualties and 2,000 Axis casualties. Eisenhower quickly launched into finding out what under his command had failed so badly and revised tactics and command structures accordingly. With these lessons learned, the Americans became a far more formidable force in North Africa.