Whether used well by a skilled commander or ignored by a disastrous one, terrain can play a huge part in deciding the outcome of battles, as these seven examples show.

In 217 BC, the Carthaginian general Hannibal was deep in Roman territory in central Italy. The Roman Senate sent an army under Consul Flaminius to face him.

Unfortunately for the Romans, Flaminius was as incapable of considering the terrain as Hannibal was adept at using it. Pursued by the Romans, Hannibal led them down the valley by Lake Trasimene. He blocked the far end of the valley and placed most of his troops in hiding in wooded hills on the valley side.

Flaminius marched straight into the trap. Hannibal’s troops fell upon his flank and pinned him against the lake. The destruction of nearly four legions was a huge blow for the Romans.

In AD 9, a Roman army of 12,00-15,000 soldiers was marching back to winter camp in Germany, under the leadership of legate Varus. Betrayed by their ally Arminius, chief of the Cherusci tribe, they found themselves deserted by their local allies in the heavily forested Teutoberger Wald. (Teutoburg Forest)

What followed was perhaps the greatest disaster in Roman military history. Roman legionaries excelled at fighting in open spaces, where they could bring their disciplined formations to bear. The German tribes, on the other hand, excelled at fighting in the broken terrain of the forests. Their ambush annihilated the Romans, wiping out an entire army of the greatest empire of the era. 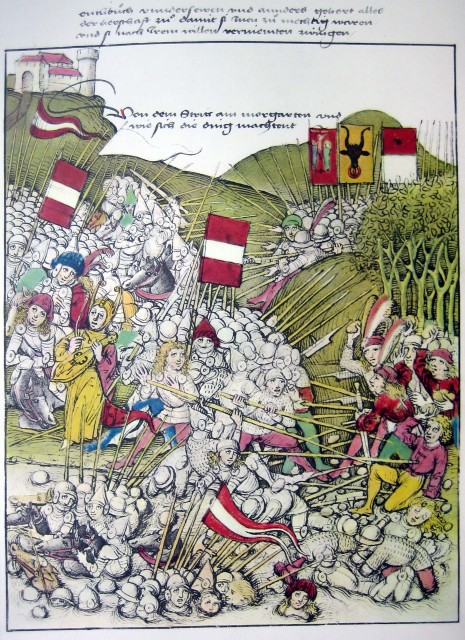 In 1315, the Habsburg Duke Leopold II set out to suppress a revolt by the Swiss, and instead proved their superiority. It all came down to the terrain.

Ascending the mountainside near Morgarten, Leopold, and his army, led by heavily armoured knights, found themselves hemmed in on a path blocked by Swiss infantry. Unable to use cavalry to their advantage in this difficult terrain, they instead became crammed in together in the narrow space. Swiss infantry, hidden on the wooded hillside above, rolled tree trunks and boulders down onto the Habsburg force, knocking men off the cliff edge into Lake Egri. They then charged into the flank.

Leopold’s force was slaughtered, though he managed to escape. Swiss infantry became the most famous in Europe.

At the height of the Frist World War, British Field Marshal Haig decided to launch an offensive against German lines in Flanders. There were sound reasons for the attack, but as with so many manoeuvres of the First World War, the way Haig went about it proved disastrous.

The area around Passchendaele, in which Haig planned to launch his offensive, had been turned from the marsh into usable land by a delicate drainage system that held back the forces of nature. Ignoring the advice of locals, Haig began his attack across this terrain with a massive artillery barrage.

On 22 July 1917, the artillery opened up, over 4 million shells undoing the delicate drainage work and turning the area into a muddy quagmire. Hundreds of thousands of men had to wade through the waist-deep mud as they advanced into the mouths of German guns, and ninety a month drowned in the ruin Haig’s artillery had made.

The Winter War, the Soviet Union’s 1940 invasion of Finland, was one of the history’s most spectacular pyrrhic victories, and one weighed down with irony, as cold weather and icy terrain beat the Russians, a nation normally protected by the winter.

The Soviets simply had not taken into account how bitterly cold and snowbound a country they were invading. Weapons froze, vehicles became stuck, frostbite was endemic and men died of cold. Ironically, the snow kept in the warmth on some patches of land, meaning that they were marshy beneath the snow, and the Soviets sank into them.

Though the Soviets pushed the Finns back, they took huge losses doing so. Finland would retake all the lost territory when Germany invaded Russia.

One of the great challenges the Allies faced following the D-Day landings of 1944 was the terrain of northern Normandy. Known as bocage, it consisted of small fields, sunken roads and thick hedges raised up on banks. This broken ground, full of pre-made defensive positions and ambush sites, was perfect defensive terrain.

Digging in with their tanks and heavy guns, the Germans forced the Allies into a slow, protracted fight, field by field, across this part of France. But though the terrain allowed the Germans to delay the Allied advance, naval guns, and air attacks could not be stopped by hedgerows, and these prevented the Germans from forming up for a counter-attack.

In 1954, General Henri Navarre, the new French commander in the Indochina War, decided to force the Vietnamese under General Võ Nguyên Giáp into battle. Navarre chose Dien Bien Phu as the place for this.

It was a terrible choice. Deep in the hills of northwest Vietnam, Dien Bien Phu was a valley surrounded by high ground, well into Vietnamese territory. 14,000 French troops were sent in March, and immediately found themselves surrounded by far larger numbers of Vietnamese soldiers. The Vietnamese cut of French supply lines and besieged the encampment.

Caught in the low land surrounded by enemies on the higher ground, the French found themselves under constant bombardment. Their only way of getting supplies was by air, and engineers constantly put their lives at risk repairing the runway between bombardments. Thick undergrowth hindered the French tanks, on which their plan had relied. There was no breaking out of the trap they had made for themselves.

The result of the battle was independence for the Vietnamese, and humiliation for the French.

What all these battles have in common is that the winners heeded the terrain, while the losers did not. The terrain is still important in today’s wars and conflicts.